Halfway through third grade, my beautiful multiracial daughter declared, "I don't want to go to school." Instead of her cheerful self, she seemed morose and anxious. "Really?" I asked. "What's going on?" After some probing, I learned that she was being teased about an aspect of her appearance linked to ethnicity (I won't reveal details to protect her privacy). The relentless comments from peers had chipped away at her sense of emotional safety, and who wants to feel like that day after day? Luckily, her teacher was a strong ally. I approached Ms. Dino, and we designed an identity workshop to take steps toward a safer classroom culture.

Identity Safety: What Is It?

According to Dorothy M. Steele and Becky Cohn-Vargas, identity safe classrooms are "those in which teachers strive to ensure students that their social identities are an asset rather than a barrier to success." In such classrooms, students feel safe, included, and valued as members of a learning community. Having been an educator for 20 years and a parent for ten, I would venture to say this is not the norm. More often, I see classrooms that are identity-neutral -- where conversations about who students are in the world and what they need to feel safe just don't happen. Identity safety is a critical feature of equitable classrooms, so what gets in the way?

Many students face a very real barrier to safety and learning. Stereotype threat, a term coined by social psychologists Claude M. Steele and Joshua Aronson, refers to the risk of confirming negative stereotypes about one's own identity group. Social threats of this nature can signal a survival threat to the brain and set off an amygdala hijack -- an overwhelming emotional response that disrupts cognition. In Ms. Dino's words, "When a student is dealing with an emotional issue, especially when it involves a part of their identity, they are distracted and unable to focus and retain concepts and ideas as effectively."

Steele and Aronson found that academic performance often decreases when students are aware that their behavior will be viewed through the lens of racial or gender stereotypes. In my daughter's case, the peer comments made her want to withdraw from school. Subsequent research has uncovered many consequences of stereotype threat, including:

4 Ways to Increase Identity Safety in the Classroom

Before sharing a few reflections, I offer this caveat: Students don't enter identity work on a level playing field. Growing up in a racialized society has an emotional impact on students of color and leads to unconscious biases that affect how all of us perceive ourselves and others. In the long run, our work is to create affirming classroom cultures that interrupt bias and prime students with positive associations about who they are and can be in the world. That said, here are four possible steps:

1. Name and affirm all types of identity.

When we introduce the language of identity, we combat the invisibility and isolation that many students feel. In my daughter's class, I drew a tree to represent the unique and beautiful collection of selves that makes up each child. I asked students, "What is identity?" and had them populate the branches of the tree with all the elements that they could suggest: an individual's name, race, culture, language, family, interests, appearance, personality, gender, and more.

It's essential to set a safe tone by modeling our own experiences -- both positive and challenging -- around identity. I shared a story with the class about being a child of divorced parents and having another parent label me as lacking "good values." Ms. Dino reflected on having immigrant parents and how she often felt "different" and "outside" of the community. Students listened intently, and we could see their willingness to take a risk increase.

When it comes to identity, students need an opportunity to tell their own story on their own terms. I developed the graphic organizer below as a scaffold to this end. After modeling our responses, Ms. Dino and I gave students time to write about one aspect of their identity before sharing in small groups. Factoring in choice, and using small groups at first, allowed students to assess their readiness to be vulnerable. Some started with low-stakes disclosure while others dove into riskier territory. Two students shared their experiences of being teased for having same-sex parents. Another spoke of what he loved and what was sometimes tough about his racial identity, while others spoke of being pigeonholed by their gender. Ms. Dino repeated this activity several times throughout the year. 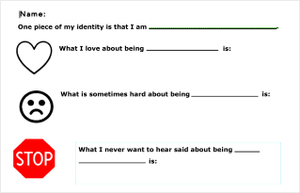 At the end of the workshop, we asked, "What agreements can we make to each other to create a safer classroom community?" Students brainstormed their ideas on post-it notes, and we invited them to share. One girl said, "We should fill each others' buckets with compliments." Not only did "bucket-filling" become a class agreement, but it also initiated a new ritual called Seashells. Once a week, Ms. Dino led a community circle in which students had the opportunity to give each other seashells along with a public appreciation.

I recently asked my daughter, "How do you think the identity workshop last year impacted Ms. Dino's class?" Her response: "People stopped teasing me after the workshop. They stopped bullying." As a mom, that's all I really needed to hear. As an educator, I can see that another world is possible.

How do you promote identity safety in your classroom or school?