Every year, millions of students are struggling in algebra class. And, despite what the pundits say, the answer is not to get rid of math education; the answer is to fix it.

Math teachers in the U.S. have the world's hardest job, because opinions about the subject are already stacked against it. Over the years, the humanness and relevancy of math have been squeezed out, and students no longer see its significance. To get students engaged in math again, we have to add the human element back.

Math is everywhere. The nautilus shell is nature's Fibonacci sequence. Architecture is geometry in action. Snowflakes illustrate symmetry. And even hairstyles, like African braids, show us fractals at work.1 Math is the poetry of the universe. It is time to show it that way. Let's teach math in a popular and less archaic way.

Let me share a dirty little secret about math education within the university: it is pretty rotten! Maybe you knew that already. What I can add is that there is no motivation to change it. University math departments have an awesome deal. They teach an often-required and often-dreaded math class for all undergraduates at the university, which justifies their existence. Since many departments are beholden to them for this service, math departments are less apt to change.2 As such, they teach math as if all students are future mathematicians, and do little to invoke the general student population with any kind of inspiration. Here lies the linchpin for our nation's poor math performance. As a result, generations of students have had bad math experiences.

Teaching math poorly is expensive. Colleges spend two billion dollars helping students build basic math skills.3 And those students who want to go into STEM fields often leave because of their difficulty with the math requirement. The data shows that over 60% of students who want to major in STEM fail to do so.4 The impact is especially severe for women and minorities.

Math classes are designed to dissuade; they are weed-out classes.4 Weed-out classes have a long yet unknown history in the U.S., which I uncovered when writing my book Save Our Science. Weed-out classes have been around since the end of the 19th century. Difficult classes were created to discourage doubtful students and identify future scientists when course offerings were limited at the advent of the elective system.5 This outdated mindset has been passed on, and many professors don’t want to change (or know how to change), because it has always been that way. Many professors have adopted the backward thinking that they don't want to "spoil" the next generation, and everyone should pay their dues. But we don't have time for that kind of foolish thinking anymore. There is too much at stake.

Math is the STEM admission ticket -- if you pass, you proceed; if you don't, game over. It should not be that way. I've heard countless stories about how math has killed dreams. I once met a very bright television producer who told me that she wanted to be a doctor, but could not pass calculus. This is very sad. Nothing should have that much power, especially to stop people from doing good things.

We need to take math back.

The role of math teachers is tantamount to changing the perception of math. We've got to infuse fun math in the classroom, and one way is to hire and train teachers so that they feel comfortable with the topic. There is a big difference between what American and international math teachers know, and Figure 1 below shows how this difference is directly linked to how well our students do in math.6 In some countries, you are required to take four years on the topic you teach. The solution is for the U.S. to recruit math students who are the top performers in their class -- and can teach! The only way to make this happen is to make salaries more attractive and create other incentives. 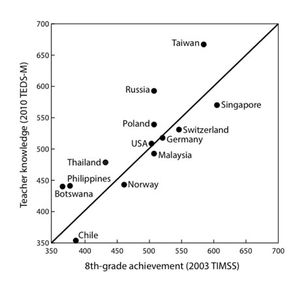 One more extremely important place to fix math education is at home. The trick to overcoming our national math phobia is to encourage curiosity by peppering in a math problem whenever possible at home. We can also make math part of popular culture with television shows like Numb3rs and institutions like the Museum of Mathematics. Creating pathways for a greater affinity towards math will get our kids ready for the 21st century.