Since being asked to pilot my school's first iPad 1:1 classroom, I've been working through a paperless project-based learning unit with my eighth graders. It had been going on since the first day of school. And just before winter break, at the end of the quarter, it culminated in classroom presentations.

However, that didn't mean that the audience got to kick back and let their mind drift. Heck no. Instead, the audience of students arguably developed more brain sweat then the actual student presenter.

I won't go into too much detail about the semester-long unit, but suffice it to say that the end result of the presentations were for the students (and their superhero alter egos that they developed during our 1st quarter narrative unit) to present an advocacy speech to the United Nations.

And although the unit I created aligns to several common core standards, it speaks really well to CCSS.ELA-Literacy.W.8.7: Conduct short research projects to answer a question (including a self-generated question), drawing on several sources and generating additional related, focused questions that allow for multiple avenues of exploration.

And, no, not the real U.N. I mean that the role-play didn't end at presenting. The audience also lent an additional layer of authenticity to our final production. You see, the whole class pulled nation's names out of a jar to research. They represented these countries during the classroom presentations. Our makeshift ambassadors made signs with their country's name, watched a live stream from the actual United Nations' floor, and wrote an informational blog post focusing on basic information about their assigned nation: it's main exports, stats, etc.

What this did was prep the audience to listen to the advocacy speeches through the lens of what they knew about their country. In other words, if Mr. Inconspicuous (a masked hero one of my students created) presented on the dire need to fund a mythical organization dedicated to helping endangered animals, the speakers had to think about whether this issue was applicable to the needs of their assigned country. After all, they can't just fund every cause.

The heroes pitched their national or internationally themed causes to the members of the United Nations in the form of either a PowerPoint or Prezi. They also presented a website they each created using Weebly as a means to get their message out to the public, and proved their research by showing an infographic developed using Piktochart.com.

However, the members of the United Nations can't be fooled. They won't just throw their weight behind any project. They have to make sure that the superhero before them knows what he or she is talking about, and the speeches themselves don't always prove it to a skeptical potential sponsor. To ensure this, the fledgling ambassadors asked questions of the presenter.

We've been using Google Drive all semester, so the students had a level of fluency using the technology. However, of all of the collaborative activities we did this semester, for whatever reason, these U.N. presentation days proved to be the most engaging and successful.

What I prepped ahead of time was a Google document for each period that had the list of presenters already entered in the order in which they were to present. I used subheadings to divide them into dates.

Here's a quick screencast so you can see how I set it up. 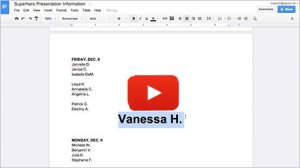 Anyway, as students presented, I could watch as their questions lit up the Google doc. You could tell what presentations resonated or made the students really think because the high lever questions were quicker to come. Controversial topics or solutions really made the doc go wild. And generally, as really great questions appeared, they would inspire versions or follow-ups. In other words, the kids were learning from each other.

The Power of Transparency in Developing Questions

The transparency of the document engaged everyone and encouraged the best from them all. I was playing along as "Heather (United States)," typing model questions along with them all. By playing along, students who still struggled could take cues from my own questions and be inspired to ask their own.

In the end, many students who were normally quiet were encouraged by the ability to type their voice in class, and I had a chance to see them all think aloud through their real-time writing.