In August, I wrote about the importance of providing children with role models in science, technology, engineering (STEM). In that post, I encouraged teachers to participate in the #scichat Challenge by inviting an expert into your classroom, either in-person or by using technology (You still have time to participate!).

In August, I wrote about the importance of providing children with role models in science, technology, engineering (STEM). In that post, I encouraged teachers to participate in the #scichat Challenge by inviting an expert into your classroom, either in-person or by using technology (You still have time to participate!). About a month ago, the President's Council of Advisors on Science and Technology released the Report to the President: Prepare and Inspire: K-12 Education in Science Technology Engineering and Math (STEM) for America's Future. This report renewed the call for improving efforts in STEM education and highlighted the importance of engaging students in high quality education experiences.

Students need exciting experiences that speak to their interests - in school among teachers, peers and mentors, beyond the curriculum, and beyond the classroom. These experiences should reveal to them the satisfaction of solving a problem, discovering a patter or phenomenon on one's own, becoming insatiably curious about a puzzling question, or designing and creating an invention. Students should be able to see themselves in the role of a scientist, technologist, engineer, or mathematician, which often requires and association with role models. They need to have experiences that demonstrate STEM subjects an connect to their own lives and how working in these fields can help solve some of the most serious problems human beings have ever faced. Research shows how important it is for children to have exciting experiences in STEM early on, in elementary and middle school, to capture their interest and spark a lifelong passion. Students who express interest in STEM in eighth grade are up to three times more likely to ultimately pursue STEM degrees later in life than students who do not express such interest.

One way to do this is to involve your students in citizen science projects. In these projects, scientists turn to the general public to help them collect data, make observations, and conduct "real" science. Many of these projects are appropriate for elementary, middle and high school students. 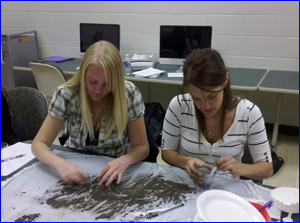 Science for Citizens aims to play matchmaker between scientists and interested citizen researchers. With projects ranging from counting and identifying worms in the Midwest, to observing flowering patterns on mountain tops in the Appalachians, to helping scientists create a "sound map" of the world, there is a good chance that you will find an interesting project that fits your curriculum.

analyze actual samples of fossil matrix (the term for the material in which a fossil is found) from a mastodon fossil excavated in New York. Volunteers sort through the matrix to find ancient shells, bones, pieces of plants, and rocks from the time when the mastodon lived and died. The discoveries will be sent back to the Paleontological Research Institution, where they will be cataloged and further analyzed by paleontologists to help scientists form a true picture of the ecology and environment in which the mastodon lived.

My students sorted and weighed rocks, shells and twigs. Some of the twigs appeared to have been chewed (and excreted) by a 13,000 year old Mastodon. Near the end of class, program manager, Dr. Carlyn Buckler joined us via Skype to describe how this citizen science projects helps researchers at PRI, and how other teachers have used the project with their students. She explains, "We've served over 2000 folks with this project since I've been manager.  Although I certainly see the value in interns and grad students, with them I'm preaching to the choir.  Here we're reaching those than can truly have an impact of the science literacy of the public."

These future teachers also saw the value of incorporating real science and connecting with experts. One pre-service teacher commented, citizen science "gets students excited about science and [gets them to] ask many open-ended questions that can be used to explore many different areas...students feel empowered and think of themselves as real scientists." Another future teacher explained:

Having an expert come into your room via Skype or in person sets a different mood in your classroom. I can honestly say that I was really excited to Skype with an expert today on what we were doing in class. You could tell our class really got into what she was saying. It creates a sense of reality for students to actually talk to someone as opposed to reading about those experts in a textbook.