The following is an excerpt from Miseducation: How Climate Change Is Taught in America by Katie Worth, published by Columbia Global Reports.

Something had been pestering Nakowa Kelley, and as he and his friends settled into their seventh-grade science class, he finally said it aloud. “This global warming stuff? My parents said it’s not true.”

His science teacher, Marc Kessler, had been expecting this. “So you’re getting mixed messages,” he said. “That must be a little challenging.”

The twelve-year-old recited the arguments he’d heard at home: If the earth is warming, why had it snowed so much that winter? And without carbon dioxide we’d be dead, so what was wrong with having a little more? On the other hand, the class had spent days looking at NASA data, which seemed convincing, too.

“I don’t know who to believe,” Nakowa said miserably, and then confessed, eyeing Mr. Kessler, “My parents also told me not to argue with the teacher.”

Mr. Kessler had navigated this discussion before. He had been teaching middle-school science for years in Paradise, California, a low-income, predominantly white, and politically deep-red community about fourteen miles into the Sierra foothills above my hometown of Chico. Every year, he taught a unit on climate change. Every year, students told him they’d heard it was a hoax.

“It’s super respectful of your parents to say not to argue with the teacher, but it’s totally okay in my class to bring up differing views,” he said. “If scientists didn’t argue, we wouldn’t get to the truth.” 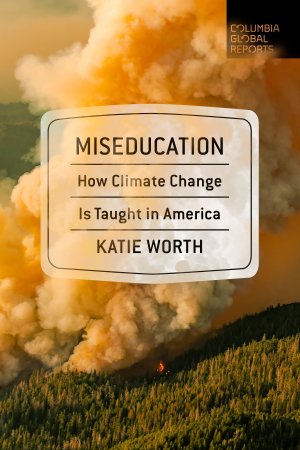 Getting to the truth about climate change has proved difficult for many American children, but all over the country there are teachers like Mr. Kessler helping them get there. Mr. Kessler devotes time each year to climate science not because California state standards require him to, but because he believes his students deserve it. This is also true of Ms. Del Real at my alma mater, Ms. Lao in Oklahoma, and many others I met while researching this book. These teachers exist not just in cities and college towns, but in the nation’s reddest states and also in the reddest parts of blue states. Their work helps children understand the climate crisis unfolding around them and prepares them to participate in civic deliberation over what to do next.

Not all teachers are as adept or motivated as Mr. Kessler. Some don’t teach climate science because they reject its conclusions or fear controversy. But research shows that even teachers who accept the science often do a subpar job of teaching it, particularly if they don’t have a good grasp of it themselves.

A raft of environmental and education organizations have set out to address this problem through professional development programs and other resources. Washington State has allocated millions of dollars since 2018 to providing climate education training to teachers; one in five teachers in the state took part in just its first two years. The National Center for Science Education has developed lesson plans aimed at navigating climate misinformation. The Climate Literacy and Energy Awareness Network, the group that surveyed 30,000 free climate education resources and found only 700 acceptable, has amassed those in the latter category into a one-stop portal. The publishers of a book called The Teacher-Friendly Guide to Teaching Climate Change mailed it to 50,000 teachers in forty-three states—a campaign meant to serve as an antidote to Heartland’s materials.

One innovative program led by the nonprofit Alliance for Climate Education sidesteps a reliance on teachers by hosting high-school assemblies that use performance, animation, and storytelling to connect directly with students on the subject. This approach is clever, said NOAA’s Frank Niepold, because if students get excited about climate science, they put pressure on the education system from the inside. “Teachers are always looking for ways to engage students, so they’re like, ‘Oh, you’re curious about that? That’s important to you? Let’s do it,’” Niepold said.

When given the chance, young people are curious about it, and do consider it important. A 2021 Pew survey investigated each generation’s attitudes about global warming. Gen-Z and Millennial respondents voiced considerably more concern about climate change and more willingness to do something about it than older respondents. This generation gap was especially large among Republicans—Gen-Z Republicans were three times as likely as Baby Boomers and older Republicans to support phasing out fossil fuel use entirely. Of all the generations, Gen-Z respondents were most likely to say that addressing climate change was their top personal concern. They also reported seeing more content on social media about action on climate change than their elders.

School is not the only—or even the primary—place that young people learn about the climate crisis. Youth are likely to encounter the subject in museums, zoos, and parks; on television, films, and social media; at church; on their phones; and around the kitchen table. But schools occupy a special place in our communities as the only institutions that reach virtually all young people. If the school system is influenced by adult politics to provide an uneven education about the climate crisis—so students living in some places receive a high-quality education while those living elsewhere receive misinformation—inequities arise.

What does a quality classroom education about the climate crisis look like? Science educators agree that, at minimum, students should enter the adult world knowing the so-called “big five facts” about the crisis: It’s real. It’s us. Experts agree. It’s bad. There’s hope.

The details of how these concepts are taught matter. A 2017 review of forty-nine studies on climate curricula found the most effective made explicit connections between the global phenomenon and its locally relevant and meaningful effects. They also employed techniques that engaged learners, favoring labs, field trips, role-plays, small-group discussions, and inquiry-based learning over lectures or memorization. Some climate educators have incorporated indigenous knowledge systems into their lessons. Ecological knowledge was passed generation to generation on this continent long before colonizers established their first school here, and those traditions have persisted and evolved. Indigenous communities have diverse approaches to climate education, of course, but broadly speaking, they tend to be place-based, observational, and participatory methods of studying the interconnections between humans and our environs.

There is tension among science educators about whether a goal of climate education should be to inspire action. Some argue that such a goal turns classrooms into a political space. But that argument assumes schools are a politically neutral ground to begin with. It also pretends that the climate crisis is simply another body of knowledge for students to understand, rather than something relevant to a learner’s personal life and future. “We’re not talking about how kids understand mitosis, right?” said researcher K. C. Busch. “We’re talking about a topic that has a real-world, immediate implication.”

Busch herself was a teacher for twelve years before joining academia. “As a teacher, my goal was never to make students who could reproduce knowledge for a test,” she said. “The goal was to produce people who could go out and live their lives and contribute to their communities. It was to produce citizens. And citizens have to take action.”

On the whole, science remains one of the most trusted institutions in America, and that trust has remained relatively stable for the last forty years. Dig into those numbers, however, and patterns appear. Christians have less trust in science than nonreligious people, rural dwellers less than urbanites, and Republicans less than Democrats. There have been times in the last forty years when those camps had equal confidence in science. Today, the space between them is as large as it’s ever been.

These patterns are no accident of history. Rather, they are the product of successful disinformation campaigns, animated not by science but by ideology. Those who lead these efforts are united in a singular belief in the free market coupled with a profound distaste for government regulation. They hold up the free market as an unimpeachable source of American prosperity. But as scientists have studied the planet’s ecosystems, they have again and again arrived at the conclusion that unregulated markets have inflicted environmental costs that they don’t pay for, causing real and lasting harm to humans, animals, and plants. Acknowledging that truth would concede that unfettered capitalism is a deeply flawed system. Instead, free-marketeers attack the messenger—science. By undermining the science on tobacco, acid rain, asbestos, nuclear weapons, ozone depletion, and climate change, they helped birth the “post-truth” world we find ourselves in now, where even the most authoritative sources are met with suspicion and can be contradicted with “facts” of dubious origin.

This is an excerpt from Miseducation: How Climate Change Is Taught in America by Katie Worth and published by Columbia Global Reports.