Many teachers shiver over the iconic scene from Ferris Bueller’s Day Off when monotone economics teacher Mr. Lorensax, played by Ben Stein, drones on about voodoo economics and the Laffer Curve while his students drool on their desks. Like most teachers, I had moments early in my career when I knew I was headed into Mr. Lorensax territory—my lectures on the sociopolitical effects of proto-industrialization on early-modern European labor, I remember, weren't particularly scintillating.

My classroom is different now. I’ve discovered that igniting students’ creativity is key to getting their buy-in and depth of comprehension. Social media can do wonders for engaging students, particularly when they use it to assume the persona or character of a historical or literary figure in a creative project. While it may seem that they are just looking at funny memes or recording that killer dance move, they can actually connect and communicate in some profound ways.

Moreover, meeting students where they are in their own culture and lived experience through culturally responsive teaching is key to lasting education. Inspiring students to translate academic knowledge into contemporary mediums is a powerful tool for student learning—and it’s downright fun.

A Case in Point

The Federalist and Anti-Federalist Papers are a daunting read for anyone, but when I had my U.S. History students assume the identities of “Brutus” and “Publius” (an anonymous Anti-Federalist and the collective pseudonym of Federalists Alexander Hamilton, James Madison, and John Jay, respectively) and take to Tweetgen, a fake Tweet generator, to debate the merits and flaws of the United States Constitution, the entire experience was transformed.

Students translated segments of the Federalist and Anti-Federalist Papers into 280-character tweets and debated the founding ideas using contemporary syntax. The debate over popular sovereignty and the danger of factions in representative government can get a little cerebral and difficult (particularly when it’s rooted in dry text that is hundreds of years old), but when students took those same ideas and translated them into their own language, along with hashtags, emojis, and discussion-like tweets, they revealed their understanding of the ideas in unexpected and often humorous ways. 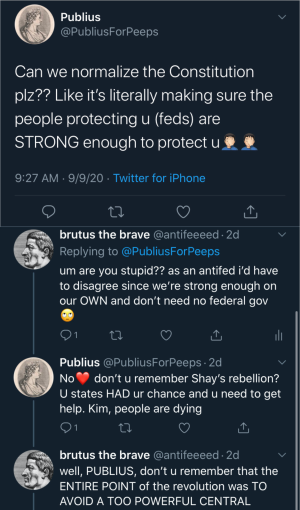 My U.S. History students clearly preferred what we dubbed “Twitter Wars” over listening and note-taking—so much that they took to other social media platforms to explore later periods. They imagined that they were in the courtroom during the Salem witch trials and posted their reactions and discussed courtroom events via Snapchat. When it came time to learn about the First Great Awakening, a Protestant religious revival of the 18th century, we all took to Twitter again, creating a massive network of accounts where we relived the period’s fervor and debate. Students took on various characters from different walks of life, like preachers and common people, and often checked their Twitter threads throughout the day and week. They engaged with the content in a way I had never seen before as an educator. 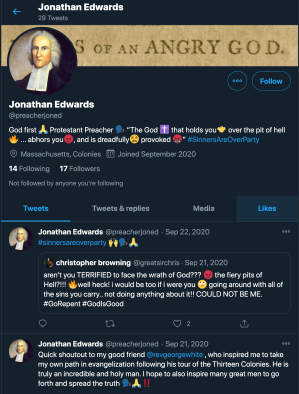 Leveraging social media for creative learning is certainly not restricted to social studies or the humanities; it can be used in every discipline with just a spark of creativity. One of my colleagues who teaches environmental science runs a Tinder dating knock-off project he calls “Timber,” in which students act as biomes, and I can imagine how students could take to TikTok for math proofs. The fun learning possibilities are limitless.

How to Get Started

Leveraging social media transformed my classroom, but it was overwhelming at first. Over time, I refined my approach.

Pick the right topics: Not all topics work well. Start by imagining what it would look like if social media existed during a certain time period or context, and from there visualize how a character or historical figure would have represented themselves if they had had social media. Then envision how a concept or idea might have been debated. It should become clear quickly if the topic will work with this social media strategy.

Pick the right tools: Each social media platform has its advantages. Twitter uses 280-character text with optional photos or videos; Instagram uses pictures to capture moments in time; Snapchat creates short videos; and TikTok overlays music onto video, incorporating movement, dance, and text. TikTok doesn’t work as well as Twitter for debate and discussion, but it works well for short storytelling and building off others’ video stories. Snapchat, Instagram stories, and TikTok work well for small groups. Familiarize yourself with the platforms before committing.

Make the choice collaborative: Choice and collaboration is key to student buy-in. Engage students in deciding which platform is best for a project. A shared vision for the project builds excitement and engagement. I’ve found that when I include my students in choosing the right tool, even students who tend to resist group projects are all in.

Get involved: Create an account and adopt a medieval lord’s or disgruntled peasant’s character and join the debate. Make a cameo in your students’ videos. Suggest ways in which students can interact with one another by making appearances in each other’s videos, acting as extras or background characters, or by engaging and tagging each other on Twitter. Your students will appreciate it when you join in the fun.

Cross-pollinate with other classes and disciplines: My World History students joined forces with a Language Arts class to capture moments from Chaucer’s Canterbury Tales through Instagram, and we worked with a Drama class to help acting out scenes from the Salem Witch Trials on Snapchat. I can envision a social media collaboration that brought together art, math, and history to explore cultural history through Islamic art and geometric patterns. Or, students could assume the role of European, Asian, and Middle Eastern traders along the Silk Road to discuss the technology and art of the Islamic Empires.

Consider access and family preference: If students have school-issued devices, social media sites are likely blocked, so they will need to use their own devices. But some parents or students may not want to use social media (even burner accounts for a class project), and not all students are familiar with or have access to social media platforms or even their own devices, or ample data. Student participation often requires parent and student permission.

Provide options and alternatives: Students who do not have parental permission to use social media doesn’t mean excluding them. They can act as extras or collaborators without needing access to a social media account, or they can create offline look-alike social media content. Tweetgen allows users to create realistic fake tweets, and you can create offline videos in the spirit of Snapchat with Flipgrid or Clips—the experience can be just as fun and engaging offline.