“Why should the people who work hard and earn more money foot most of the tax bill?”

“People at the bottom need their dollars more than those at the top.”

These are snippets of a political debate that many would expect to read in The Washington Post. They wouldn’t expect to hear these ideas in a high school math class. Yet these are the types of ideas I regularly hear in my classroom. Sure, my students solve equations and graph curves like all students, but they also apply the math we’re studying in real-world activities that are open-ended, complex, and collaborative in order to get them excited about the possibilities of using math. One way they do this is through math debates—passionate arguments about the data sets they analyze and the mathematical models they create.

The student debate highlighted above comes from an activity about federal income taxes that I use in my precalculus and modeling course to introduce piecewise-defined functions, which use different formulas for different input values. My goal is to convince students that studying piecewise-defined functions is worthwhile. In calculus, my students do math debates around state transportation as I introduce them to the mean value theorem. Math debates around real-world issues allow them to explore, ask questions, and be creative with the math.

Next, I have students read a news article that explains some of the debates surrounding the current event I introduce. While Congress was writing a bill to reform the federal tax system in late 2017, I had my students read an article from The New York Times about some of the proposed changes.

Diving Into the Math

At this stage students are invested, and they’re ready to engage in problem-solving. I divide students into small groups of two or three. For the federal income tax example, I gave students two data tables from the IRS—from 2017 and 2018—which show the marginal tax rates for the seven tax brackets. With that data they built two piecewise-defined functions. A citizen’s personal income is the input, and the output is the total amount of income tax that person owes to the federal government. I leave out deductions and tax credits from the analysis to keep things simple and to allow students to clearly examine one aspect of income tax policy. Once students have built their two income tax functions, I ask them to graph the functions with an online graphing calculator, like Desmos.

To explore this, in their groups or through whole-class discussion they describe some of the graph’s important characteristics using precalculus terminology like continuity, domain, and slope. I also have them interpret each characteristic of the graph in the context of income tax policy. I want students to clearly see the connections between precalculus concepts and political choices.

Some students notice that for each piecewise-defined function the slopes of the line segments increase from left to right. They explain that the slope represents the marginal tax rate for each bracket and that the increasing slopes show that we have a progressive income tax in the United States.

Getting Into the Debate

Before starting the debate, it’s important to lay out expectations. I encourage students to listen to one another carefully and then ask questions in ways that seek to understand others’ ideas and perspectives before challenging them. For example, if a student believes that a peer made an erroneous assumption in reaching a conclusion, she might ask, “What are some of the core assumptions underlying your argument?” Part of the expectations around these math debates is that students’ proposals will be challenged so that they have to clearly explain and strongly justify their positions. I play devil’s advocate when students aren’t adequately challenging the ideas put forward. 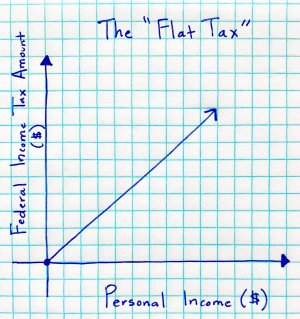 The debate revolves around a final problem. For example, my students debated about their ideal federal income tax function, which I had them sketch as a graph. This is the most fun part! Some libertarian students sketch a horizontal line, which means that every citizen would pay the federal government the same amount in taxes. Other libertarians and some conservatives sketch a single diagonal line, which represents a flat tax rate for all citizens. Finally, some conservative, moderate, and progressive students suggest that the current progressive income tax system is fine the way it is or that it should curve upward more or less steeply.

Of course, there are no universally accepted “right” answers to the debate. Math can help us analyze trends and outcomes in public policy, and it can also clarify tradeoffs, but it will never be able to tell us what is “fairest” or “most effective.” It can’t make our decisions for us.

Whether or not some of my students become U.S. senators or IRS tax analysts, all of them are future voters and participants in our democracy. My hope is that, through math problem-solving activities like this one, they will be informed and engaged “mathemacitizens” on tax policy and on all of the other issues that impact the well-being of our people.