Two years ago, Julie Ward, the math curriculum coordinator for Cambridge Public Schools in Massachusetts, took a look at test scores for the district’s eighth graders from the previous school year: 70 percent of white students had passed the state math tests while only 10 percent of black students had. Digging deeper into the data, she found that the numbers were part of a pattern that was consistent year to year.

Cambridge staff began trying to understand why there were such racial disparities in math performance, remembers Manuel Fernandez, the principal at Cambridge Street Upper School, who says that he and his staff noticed a strong correlation with the ways students were placed in math courses.

“Over time you end up with lower-level math courses filled with black and Latino children, and high-level math classes with white and Asian children,” he said. “Students internalize it—they believe the smart kids are the white kids. Our staff said we cannot continue to divide our students this way.”

Tracking—the practice of separating students by perceived ability into different classes—has been particularly pervasive and contentious in math. In eighth-grade math classes alone, 75 percent of American schoolchildren are placed in ability-based classes, making math the most tracked course in schools, according to the Brookings Institution. Decisions about tracking vary school to school but are typically based on test scores and grades, along with teacher recommendations, which some research suggests can be biased.

Students internalize it—they believe the smart kids are the white kids. Our staff said we cannot continue to divide our students this way.

In the past several years, schools and districts around the country, including ones in Cambridge, San Francisco, and Escondido, California, have eliminated math tracking, recognizing that the practice can create inequities between students, with significant ramifications as they progress through school. Lower track students receive a less rigorous and rich math curriculum, which can impact their math proficiency over time. Tracking can also stymie long-term student achievement: Algebra I is a gateway course that students must take to enroll in upper-level high school and college math classes—and in many cases, to continue in college studies at all, particularly at community colleges.

Research suggests that math tracking is not an effective practice for improving student performance, either. A 2016 meta-analysis of nearly 100 years of research found that between-class grouping, or tracking, did not benefit students at either the high or low ends of achievement, although fully jumping a grade can lead already high-achieving students to academically outperform same-age peers. Additionally, children are acutely aware of where they stand in tracked classes and identify as “smart” or “not smart” based on their placement—beliefs that can stick with them for life, according to multiple studies.

In contrast, classes where students are placed in mixed-ability groups and teachers foster a growth mindset can have the opposite effect. Research shows that students in districts that have detracked—and set high expectations for all students—scored higher on state assessments. These districts also helped staff and students internalize a growth mindset and the idea that all students can learn and improve.

Until five years ago, eighth-grade students in the 56,000-student San Francisco district were typically placed in Algebra I or general eighth-grade math, based on grades and teacher recommendations. From 2008 to 2010, nearly 80 percent of black and Latino students were placed in General Math, while 55 percent of Asian and white eighth graders were placed in Algebra I, a higher level course. Of the black and Latino students in Algebra I, more than half had to repeat the class.

Math tracking systems like San Francisco’s old system are ineffective in part because only some of the students are exposed to the content they need to grow as math learners while others are not, according to a statement from the National Council for Teachers of Mathematics. The NCTM points to flat national math scores over decades, the need for remedial math in college for 50 percent of students, and the poor performance of U.S. students on international tests in mathematical literacy as evidence that current practices undermine student access to learning. 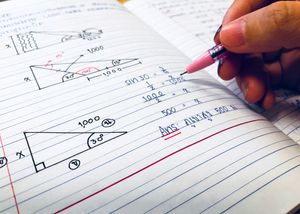 With support from teachers and school leaders, the San Francisco district eliminated tracking in eighth-grade math in the 2014–15 school year, and instead required all students take Algebra I in ninth grade. Results have been striking: The repeat rate for Algebra I has plunged for all racial and ethnic groups, from an average of 40 percent to 10 percent, including for English language learners and low-income students. For black students, the repeat rate dropped from 52 percent to 19 percent, and for Latino students, from 57 down to 14 percent. At the same time, black and Latino students are enrolling in advanced high school math courses at higher rates.

“San Francisco had a strong team of math coaches and leaders who knew what research was telling them and decided to take it on,” said Jo Boaler, a Stanford University mathematics education professor and researcher who has worked with the district. “What has changed is the messages kids are getting—they are no longer being told that they have a fixed brain.”

A tracking system impacts much more than student placements, though, and can reinforce established—and flawed—perceptions about students’ math competence.

More so than other subjects, math can be a sticking point for parents and educators, many of whom believe a student either gets the material (is “a math person”) or doesn’t. Yet in traditional classrooms, where speed of completion of rote problems is emphasized, students who “get it” are often those with more practice or who are simply good at memorizing.

Educators can often reinforce these assumptions. Studies have found that white teachers tend to have lower expectations for black students than white ones, and that black students are less likely to be recommended for gifted or advanced math classes than white students, even by black teachers, which can influence placements in a tracking-based system.

These decisions about math placements can have a considerable impact on how students see themselves and perform in math. Children, especially in middle school, internalize their placement in tracked math classes, and those who perceive themselves as low performers tend to disengage and succumb to the perceived image, or stereotype, of their group. 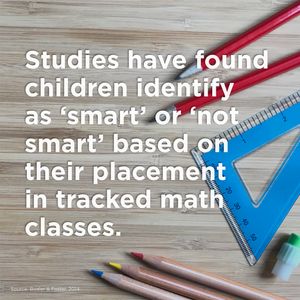 “Math is one of the places where we reinforce you are good at it or you aren’t,” says Lizzy Hull Barnes, math supervisor for the San Francisco district. “Status in the classroom is so significant in how it plays out in math.”

But math mindsets don’t have to stay fixed for either educators or students. In one study by Stanford researcher Dave Paunesku, students given a growth mindset message—that one’s intelligence can grow with practice—mastered new math concepts more readily than students given generic encouragement. While the shift to a growth mindset can sound nebulous, concrete strategies like having students work in heterogeneous groups and visually represent their thinking, and emphasizing that “no one is good at all ways of working, but everyone is good at some of them,” can help.

In Cambridge’s newly detracked classes, for example, focusing on problem-solving and group work around complex tasks has helped build confidence among students of differing ability levels, says seventh-grade math teacher Stephen Abreu. “We have less of students waiting for the ‘smart kid’ to answer the question and more different types of learners sharing what they notice,” said Abreu.

Districts and schools can’t simply detrack and assume great results will follow. Districts that have successfully detracked have had to work with both educators and parents to adapt to the new system—especially addressing the status and perceived advantage of tracking with families and students.

Districts and schools that detrack woo skeptics by explaining the benefits to all students—and proving it with results, according to Abi Leaf, the mathematics content specialist for the Escondido Union High School District in Southern California, which switched to mixed, non-tracked math classes for ninth and 10th graders in 2013. Escondido detracked when the Common Core State Standards arrived, so it was part of larger conversations about how to meet the standards, said Leaf, who added that teachers emphasize “that all children are brilliant, all people in a classroom have something to offer, and doing it fastest is not always best.”

It gives adults a different experience of math, and they build a vision of what’s possible.

Her district also provided significant professional development for educators—including support from outside consultants—and encourages teachers to collaborate in small teams to help change educators’ mindsets about math. Since the district detracked, enrollment in higher-level math classes has increased. In addition, “teachers say they are much happier with their work,” Leaf said.

Similarly, in both Cambridge and San Francisco, teachers were brought together for intensive professional learning time and worked together to rewrite the curriculum to focus on deeper rather than faster learning. Cambridge teachers worked with coaches to focus on “math talks,” or ways to get more students sharing what they know (and don’t) in class. Meanwhile, in San Francisco, teachers throughout the district now work collaboratively on math problems and contribute to a shared set of rich “low floor, high ceiling” math tasks and curriculum ideas that are collected at an open district website.

“It’s a shift in mindsets and beliefs,” Barnes says about the change. “It gives adults a different experience of math, and they build a vision of what’s possible.”