When it comes to school activities, “canceled” has been the recurring refrain during the pandemic.

But now that educators have a semester of emergency remote teaching under their belts—and many are returning in person in some form—schools are increasingly trying to improve opportunities for students to engage in school life amid the new circumstances.

From baking clubs to school newspapers, educators are reimagining how to run extracurriculars in virtual settings or have them comply with Covid-19 protocols in person. For students—and educators—these activities have provided a sense of connection and normalcy during a time when many feel isolated and stressed.

“I am loving being able to bring out some joy for these kids and allow them to shine in a way I hadn’t seen as their academic teacher,” said Christine Ashley, a sixth-grade history teacher in Oakland, California. “They’re teaching me alongside me teaching them.”

Those social connections are especially important to teens, and they may be a blind spot for school systems. A 2020 survey of secondary students and teachers conducted by Phi Delta Kappa International, for example, revealed that while teachers favored strategies like “more counselors” to address the stress and isolation of the crisis, middle and high school students chose things like more opportunities to “socialize with fellow students” and “online clubs and other extracurricular activities” by large margins. For teens, the simple need for peer-to-peer connection in unstructured forums outweighed structured programs like counseling and mindfulness sessions.

So we interviewed educators across the country who are running extracurricular activities this fall to share their insights on how they’re adapting to both in-person and virtual settings.

Carving Out Dedicated Time in the Schedule

Prior to the pandemic, East Bay Innovation Academy (EBIA), a grade 6–12 public charter school in Oakland, California, offered clubs after school—making it difficult for students to participate if they didn’t have transportation. After realizing that students needed more unstructured time with their peers during remote learning, the school decided to include clubs as a dedicated part of the school day. Now, Tuesday and Thursday mornings are blocked out for club meetings, and every teacher is required to run one.

During an advisory period, EBIA students watched teacher-made videos describing the clubs and chose which one they wanted to join.

“Choosing clubs gives them some voice and choice in a space and time when they don’t have a lot of other opportunities to do that,” said Kim Frankel, EBIA’s principal, who says new clubs like baking club, circus club, and a fitness club have emerged with the new setup. “We’ve heard from some kids that club meetings are the best part of their week, and we’ve heard from other kids that it’s the one time that they feel comfortable and safe talking and communicating.”

Similarly to EBIA, other schools are organizing virtual club fairs so that students can still hear about and sign up for different clubs from a distance. 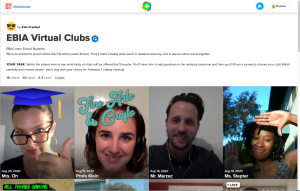 This spring at Richard Montgomery High School in Rockville, Maryland, staff and the student government association organized a virtual club fair on Google Slides for the school’s 2,500 students. Each of the 100 clubs participating edited a slide to promote its organization and included a Zoom link where students could drop in and hear more information during their advisory period.

Because students are often accustomed to informal interactions during clubs, running a club virtually has meant accepting how students prefer to communicate: chat, emojis, memes, and slang. 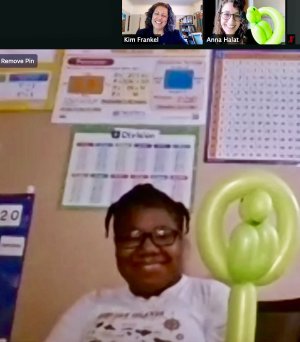 Colleen Surette, a high school social studies and psychology teacher at Georgia Cyber Academy, said she encourages teachers to accept and embrace those forms of communication so that students feel comfortable to engage more freely.

“Virtually, it’s scary to be quiet and give kids space because you don’t know if they are focusing,” said Surette, who says teachers should let students keep their video off if they wish. “But if you stop talking and create space for them to talk, they will.”

Club activities may also need to be reconsidered during the pandemic, we heard. Given new schedule demands, Surette advises recording meetings for students who can’t make them so they still feel included, and Christine Ashley recommends looking for activities that fit within tight time constraints.

Ashley, who oversees a baking club, has had to find recipes that can be baked within the 25-minute virtual meetings, like a microwavable mug cake, or have students start prebaking on their own time, for example. For liability purposes, she also adapted her school’s home science experiment contract to alert parents of the risks and get their sign-off to protect her school.

To comply with new Covid-19 rules since they’ve returned to school, club advisers at Waukesha North High School in Wisconsin are required to fill out club planning forms where they lay out how they’ll keep students socially distanced, sanitize furniture and materials after the meetings, and keep students safe during functions outside of school.

Jill Werner, a high school counselor at Waukesha North High School who runs the Key Club, says she splits meetings over two days in the school’s media center to reduce the number of students congregating together. Meetings now consist of about 50 students, and each student sits at their own table at least six feet away from others, wears a mask, and wipes down their table at the end of the meeting. Werner also takes pictures of who sat where in case students test positive for the virus and the school needs to contract-trace. 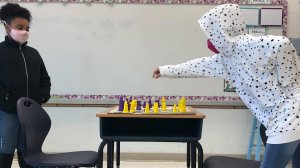 At Dunsmuir High School in Dunsmuir, California, Alysia Ferguson Garcia, a multisubject teacher and adviser of the Associated Student Body (ASB), said that typical events like homecoming, pep rallies, and Halloween carnivals that her club organized were all canceled. In their place, the ASB came up with an array of more individualized alternatives like dress-up days, pumpkin carving, and door-decorating contests—complete with prizes like gift certificates—to boost student morale while keeping everyone safe.

Collaborating in close quarters and sharing equipment—mainstays of extracurriculars like theater and school newspapers—have become liabilities during the pandemic, so schools have had to find new ways for students to interact.

Although they had to cancel their in-person production of the musical The Wind in the Willows last spring, drama students at South Stokes High School in Walnut Cove, North Carolina, didn’t let the pandemic stop them from putting on a show. Instead, students rehearsed and recorded poetry, dramatic scenes, original songs, and personal stories of living through the pandemic on their phones and computers, and their drama and chorus teacher, Christina Holland, compiled the footage into a 45-minute film, Home Plays: Snapshots of Life in Quarantine. 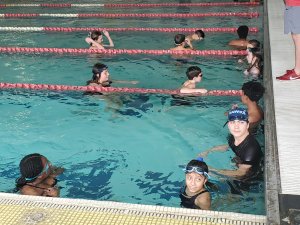 “What is unique about this project is that it became a real personal story for the students,” said Holland, as reported by The Stokes News. “I wasn’t expecting that.”

At Episcopal High School in Alexandria, Virginia, the robotics team has also had to rethink what collaborating and building look like in person. Instead of working in groups, each student gets their own tool kit and bucket of parts to build a robot. Any tools that get shared, like the hammer, get cleaned with sanitizing wipes before and after each use, and students work and test their robots socially distanced from their peers.

Though challenging, over time the new circumstances—and challenges—may even improve participation in extracurriculars overall, some teachers said.

Thomas Courtney, a fifth-grade teacher in California, says that the school newspaper has gotten better since going virtual. Students are producing more articles than before on a range of topics that include horoscopes; articles about recipes and crafting; and Courtney’s favorite, a comic about Covidman, a superhero who saves the world from the virus with his sanitizing belt. Courtney attributes students’ newfound zeal to their need for agency at a time when a lot of things are out of their control. 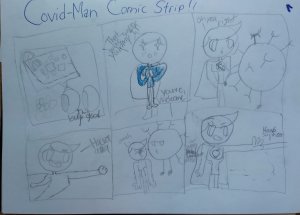 “The newspaper, and programs like it, allow [kids] to engage in something that really matters,” said Courtney, who thinks the paper is letting students engage at a deeper level that distance learning doesn’t always offer. “I really think these activities are the last remnants of something authentic for kids to hold on to.”