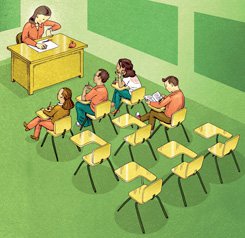 We've spent the last three weeks studying feature articles, and now my ninth graders are ready to write their own. Today, we discuss a list of 30 social issues, partially to remind the kids about what a social issue is, but also to show the students, 60 percent of whom get free or reduced lunch, how their own lives might intersect with a social issue.

The students will pick a topic from the list, which includes abortion, Iraq, gangs, and single-parent homes, and write a vignette about their experience as it relates to the issue. Later, they'll research their topics to write a commentary on how society should respond.

The first day of the feature-article project, I am impressed by the vigorous scratching of pens and what I see in my over-the-shoulder previews. Here is a verbatim sampling of the work (all students' names have been changed):

"Most kids would be unstable without a father, but that has no bearing on me personally. My mother left my father when I was five years old because he was physically and mentally abusive."

"My cousin Donal and I were on the corner, and some boys were fussing, and one of them pulled out a gun. I guess the boy didn't want anyone to tell on him, so he held people hostage. I was thinking to myself for sure that I was going to die. The boy just kept swinging and pointing the gun at us. All of a sudden, the man that lives across the street, Mr. Hell, ran and jumped on the boy's back. He yelled, "Hurry, hurry, call the police!" The man wrestled with the boy until the police came."

"One time, back in the day, when I was in the 'hood with my cousin, we got caught by the knockers [cops]. They asked us what were we doing out of school at 1:20 p.m. I told them we got out of school early because we had exams. They said that they didn't care, and then they punched my cousin in the chest three times."

I'm excited about the passionate start to the project, but the next day, only half of my students are present. Rashida and Shante are in the front row. But James isn't there to write more. Plus, I have to get five students who were absent for the introductory lesson going.

So here's my problem: My students often don't come to school.

My class breaks down like this: There are the five cheerful students, including Rashida and Shante, who always finish and are almost always present and punctual. Given some of their circumstances, I marvel at their meticulous schoolwork. Then there are ten students whose projects are missing large chunks because of absences.

The final ten don't turn in a project at all. They come regularly for the first three days, then miss a week, show up on library day, disappear again, and emerge when Shante and Rashida are typing their final drafts.

I used to take it personally, believing that I was a bad teacher. My kids were hooking because my class was boring. But other teachers reported the same pattern. The same kids miss all our classes.

I decided to find out why. Each time students were absent, I asked them to write a note explaining the reason. "I had to babysit because my little sister was sick and couldn't go to day care," was one response. Another one was, "I had morning sickness."

Sure, I got the occasional "I didn't feel like coming," but at my school, good excuses far outweigh bad ones. I'm sometimes flooded by a sea of sadness. Do all my students have horrible stories? What's being done about it?

I have a choice. I can teach my class as a series of one-day assignments, or I can assign longer-term projects and face the consequences of having only half the class present at any given time. I choose to do longer projects, and in order to make them work, I must go all out. I steal kids out of other classes during my planning period to catch them up. I assign one-day assignments to all my finishers to buy time for the others.

A colleague once said that my only job was to give students a chance to do fine work. The key word is chance. Whether outside circumstances influence that chance is not up to me. I've taken this advice to heart, and I focus now on the half-full cup: those five amazing, finished pieces -- and the ten that have potential.

The feature-article project produces some beauties. Rashida's piece on fathers is evocative and thoughtful. Shante finishes, too. Her gun-control research will serve her well if she decides to go into public policy someday. James's exposé on police violence stays half-written on my desk. I save it. The assembly next week means I'll have an extra planning period. Maybe I can nab James then, and we'll finish it together.

Robin Bingham teaches ninth-grade English in the Baltimore City Public Schools. Before becoming a teacher, she worked as a journalist.