Editor's Note: Since this article was published in 2006, principal Karen Kodama moved on to become the director of international education for Seattle Schools. All of John Stanford International School's many programs are now flourishing under the direction of the new principal, Jesely Alvarez. 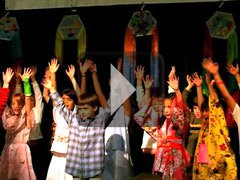 Whatever livelihoods the students someday choose, Stanford's educators believe they will need to work with people from different countries, in different languages, in the realms of business, politics, and human understanding. They will need to forge relationships and solve problems across borders of race, culture, and geography. Never mind that, at present, some are still riding bikes with training wheels; Stanford educators believe there is no better time than childhood to start cultivating a student's global consciousness.

"It's absolutely essential in this global economy that if we want our children to be successful as adults, as business people, as citizens of the world, they need to have a greater understanding and appreciation of other languages, of cultures, history, customs, and religions," says former Washington governor Gary Locke, who would have sent his own children to Stanford if he lived nearby.

The K-5 school delivers three levels of multicultural experience. Starting in kindergarten, students spend half of each day immersed in the study of either Spanish or Japanese. Second, teachers interweave global topics through every area of the curriculum. And finally, the school operates a Bilingual Orientation Center, one of three in the district, where immigrant children learn English until they're ready for regular school. In three classes -- physical education, art, and music -- those newcomers mingle with their mainstream peers.

Despite those added challenges, the 400 children at Stanford still learn the basics, consistently scoring higher than district standards on state tests in reading and math -- the latter taught exclusively in Japanese or Spanish. Stanford has pursued its mission so successfully since opening in 2000 that Intel and Scholastic named it the "Best of the Best" elementary school among last year's Schools of Distinction -- in other words, the best in the country, as identified by the two companies, for "exceptional commitment to achievement and innovation." 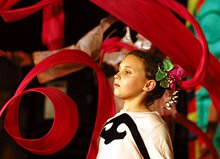 Math and Science Immersed in Japanese and Spanish

In MaryLynn Powers's third-grade immersion class, the fruits of that commitment are obvious. One day last fall, she tested the water capacity of different soil components -- humus, sand, and clay -- with six children clustered around her. They watched intently as she poured water into a cup through a filter packed with humus, the earthy, organic matrix of soil.

"!Si!" they chorused, without hesitating.

She asked the children, in Spanish, "If we put in 30 milliliters, and there are 28 milliliters in the cup, how many milliliters stayed in the humus?" Wylie Bourgette, who speaks English at home, stretched up his arm and bounced up and down, eager to answer. With a nod from Powers, he said, "Dos."

Wylie and his classmates spend half the day with Powers studying science and math in Spanish and half the day with another teacher learning social studies and language arts in English. Children in the Japanese program follow a similar routine. The logic in the division of subjects is that social studies are abstract and difficult to grasp in a foreign language, while math and science are easier to teach by demonstration. Students whose native tongue is Spanish or Japanese are typically enrolled in immersion in their own language, so even if they spend half the day struggling in English, they always get a chance to be the experts.

For fourth grader P. J. Vogel, a native English speaker, immersion has made Japanese so familiar, it's almost mundane. When he speaks it to friends from other schools, he says, "They think I'm crazy. They think I'm speaking, well, nothing, really -- speaking a different language from a different planet. I think it's just regular words in Japanese."

Principal Karen Kodama, who knows every pupil by name, addresses parents during a tour for new students.

Even more varied than the languages spoken at Stanford are the multicultural lessons, activities, and arts that reach into almost every corner of the building. In English, the children read folktales from Africa and South America. In music, they sing harvest songs from around the world. An annual grant from the Seattle International Children's Festival, funded by the Washington State Arts Commission, brings visiting artists, who have taught everything from Cuban dance to West African batik painting. Parents who have lived or traveled abroad visit to tell their stories, and children celebrate holidays from other countries, such as Mexico's Dia de los Muertos and Chinese New Year.

The school has diversity of its own to draw on: Including those in the Bilingual Orientation Center, 27 percent of students at Stanford speak English as a second language, 28 percent qualify for free or reduced-cost lunch, and fewer than half the students are white. In addition, many teachers are natives of foreign countries. But the faculty deliberately creates much of the multiculturalism.

Global Citizenship Through Compassion and Service

It's not enough, though, says Principal Karen Kodama, to deluge children with international art projects and festivals. Central to the Stanford vision is the belief that -- on top of knowledge -- compassion, acceptance, and a sense of responsibility to the world are essential traits for global citizenship. To nurture those attributes, teachers provide weekly lessons through the Committee for Children's Second Step and Steps to Respect programs, which focus on empathy, anger management, and prevention of bullying.

We Are the World:

Parent Carol Nakagawa joined a crew of 70 parents and students for a project at their sister school in Mexico.

Stanford educators take these lessons beyond the theoretical by involving the children in public service outside the school. Last year, 70 students and parents, at their own expense, visited la Escuela Primaria Juan de la Barrera, a sister school near the city dump in Puerto Vallarta, Mexico. Using money raised by selling plants students had grown at Stanford, the parents installed bookshelves and painted walls while their children attended classes. Kids also send supplies and exchange emails with a sister school in Tanzania. And when disaster strikes somewhere, whether it's a tsunami in Southeast Asia or terrorist attacks in New York City, the children write letters or fill "care" packages with their own hands.

How the Vision Became a School

Stanford is, in one parent's words, "a dream school," but how it got that way was entirely practical. Grasping the vision of its late namesake, a former Seattle schools superintendent, Kodama surveyed local parents and business leaders in 1998 about the ideal components of an international school. The answers: Spanish- and Japanese-language instruction, computer-based learning, and the study of interpersonal skills and geography.

The University of Washington's Language Learning Center agreed to provide curriculum-development support and bilingual student interns. Businesses with Seattle ties, including Starbucks Coffee Company, donated computers and foreign-language books. In addition to the international bent, Stanford emphasizes technology by helping students use computers for research, presentations, and videoconferencing with children in other countries. The school has done just what the community asked, and Kodama says that track record gives Stanford the credibility to ask again for more support. 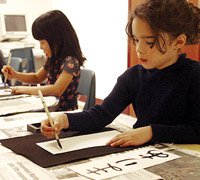 "You need a lot of energy to do this," Kodama says. "And it starts, I think, with a leader -- somebody who has that vision and keeps that vision alive at all times. You have to get out there, you have to network, and you have to make it known what your school is about." By all accounts, Kodama, who serves lunch in the cafeteria daily and knows every child by name, is the leader she describes.

Parents are a constant presence on campus, helping in classrooms, running after-school classes, tending the garden. Mary Heim, whose daughter Emily was in the first kindergarten class to start language immersion, says parents participate because the atmosphere is welcoming, and the staff encourages them to contribute ideas.

Because the Stanford waiting list has reached 200 children, parents also are pushing to bring John Stanford's vision to other Seattle schools. At Hamilton International Middle School, for example, educators help bring the Stanford model -- including immersion -- into the higher grades. In addition, the community surrounding an elementary school in southern Seattle, though not as far along as Hamilton, is eager to adopt the international worldview. Judging by the number of out-of-state and foreign educators making pilgrimages to Stanford -- tour groups come through nearly weekly -- other schools may follow.

"International education is not just for these lucky 400 kids," Kodama says. "It should be for all children, because if we're preparing our children for the future, this is what they need."

Go to "How to Create an International School."