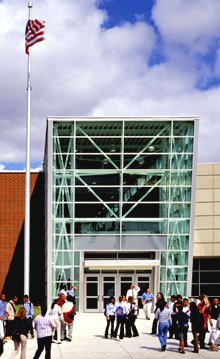 Chicago has been called many things, including Carl Sandburg's rather grisly description, "hog butcher for the world." (It is no longer that, although frozen-pork-belly futures were invented at the Chicago Mercantile Exchange in 1961.) For New Yorkers, the "town Billy Sunday could not shut down" will always be the Second City.

But as anyone knows who lives in the Windy City (oops, another name) or has ever spent time there, Chicago is one of the great architectural showplaces of America. The Loop, in the center of town, and the aptly named Magnificent Mile, may have more majestic and interesting buildings per block than any city this side of Paris.

In a morning's walk, the architectural connoisseur can see such elegant edifices as the Civic Opera House, the Rookery (an early skyscraper with interior design by Frank Lloyd Wright), the Board of Trade building, the Federal Reserve Building, the starkly handsome Exelon Thermal Technologies plants, Mies van der Rohe's glass-and-steel Federal Center, the Monadnock Building, and, across the Chicago River, the Tribune Tower (designed by Hood and Howells and said to have been inspired by France's Rouen Cathedral) -- a towering reminder of a time when the power of newspapers was unchallenged. 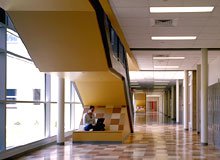 Furthermore, Wright built his first house -- for himself -- in Oak Park, just outside the city, when he was working for one of the greatest of all American architects, Louis Sullivan. Chicago was also home to the New Bauhaus after it was transplanted there from Germany before World War II.

This is not to say that Chicago is immune to architectural missteps. The oft-reviled glass ovoid James R. Thompson Center, by Helmut Jahn, completed in 1985, seems stylistically at odds with the dignified stone structures around it (critics have said that it absorbs so much sunlight during the town's simmering summers that the original air-cooling system couldn't cope). 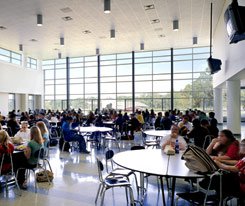 And the presence of great architecture in a city doesn't guarantee that nothing but great architecture will be built there -- even Paris has its looming horreurs. But the legacy of fine buildings in Chicago clearly can influence today's architects in all aspects of design. Case in point: A renascence of sorts in public school design is going on in and around Chicago. Within the past two years, the architectural, engineering, and planning firm OWP/P, with offices in Chicago and Phoenix, has received awards from the Chicago chapter of the American Institute of Architects, the National School Boards Association, and DesignShare for the designs of four schools. Not all are in Chicago, but all reflect that city's architectural heritage.

In a future issue, we will present an in-depth article on one of the prize-winning schools, North Grand High School. But in recognition of OWP/P's forward-thinking work, we present a pictorial tribute to three other Illinois gems as well: Carbondale Community High School, in Carbondale, at the southern tip of the state; Lakes Community High School, in Lake Villa; and Chicago's Claremont Academy. No data yet on how many students at these schools have decided to become architects, but we're keeping an eye on the situation.