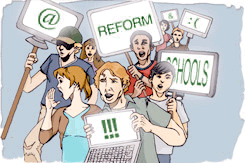 The letter, posted on Henderson's Web site, spread through the Internet on a flood of forwards. That was three years ago. Now, millions of people have heard about the Flying Spaghetti Monster.

By becoming a cult Internet phenomenon, Henderson's monster lampooned the officials' rationale for approving the teaching of intelligent design. His accomplishment illustrates how email has become a powerful tool in online educational advocacy.

Taking to the Keyboards

Parents and teachers are realizing that it's faster and easier to mount an email campaign than to use traditional methods of persuasion. Those who feel squeamish about storming school board meetings or standing on street corners with picket signs are embracing email as a way to be heard, and they're pounding away at their keyboards in record numbers.

Just look at a recent Congressional Management Foundation survey, which finds that email has become the main way people contact Congress. In 2004, the amount of correspondence sent to legislators surged to 200 million, four times the number of communications sent in 1995, and the increase is all thanks to email. Most of the messages voiced opinions, often about education issues.

The No Child Left Behind Act, for example, has generated a huge amount of email from anxious parents and teachers concerned over the effects the law is having on schools and students. Following the trend, education-advocacy groups have been quick to harness the power of email.

The Web site edin08.com, for example, is run by a group working to ensure that education reform gets debated and discussed during the presidential election. Backed by philanthropic organizations, the nonpartisan group is pushing for the candidates to talk about ways to improve education standards and give students more time and support for learning.

To that end, edin08.com is using an aggressive email campaign to collect grassroots support. When people sign up for the cause, they're asked to email friends about the group to encourage them to join as well. Once they're signed up, the Web site provides a quick and easy way to email legislators to demand education reform.

"The Internet has been a fundamental way to reach our target audience over the past year and a half," says Shannon Murphy, spokesperson for edin08.com.

Whether used as a marketing tool or as a way to influence decision makers, the results of email are impressive, at local and statewide levels.

Take the 28,000-student school district in Temecula, California. Hundreds of teachers and parents emailed school board president Barbara Tooker recently to protest a proposal to eliminate class-size reduction. Axing the program would save millions of dollars for the cash-strapped district, but many teachers and parents hated the idea.

"Increasing the teacher-student ratio would obviously translate into less time with each student," one teacher argued over email.

Another wrote in, "Eliminating the single largest investment the state has made in education is not the answer."

Tooker says the messages were also filled with personal testimonies and anecdotal evidence touting the program's effectiveness, and the email campaign ultimately influenced the board's decision to keep it.

In Dallas a few years ago, an email campaign helped convince school district officials to give teachers a raise of more than 3 percent. Before the online activism began, no raise had been planned. Throughout Texas, meanwhile, mass emails were crucial in stopping state lawmakers from taking away a $500 stipend for support staff such as custodians and secretaries.

When teachers in Fairfax, Virginia, wanted a raise a few years back, Pam Fielding, president of 720 Strategies, in Washington, DC, turned to social-networking Web sites such as Facebook.com and Linkedin.com to track down email addresses for the school district's alumni to encourage them to attend a board meeting to support the educators.

"The Internet is an amazing thing," Fielding says.

Jennifer Kabbany is a freelance education reporter in southern California.

See our article on educational activism.

How To: Mount a Successful Internet Campaign

Here are a few tips to launch your own successful email campaign:

Get started. Before you hit Send, three fundamentals must be mapped out, says Pam Fielding, president of 720 Strategies:

Tell a friend. Take the pyramid approach: Ask an interested friend to email the school board, and request that he or she call on three friends to do the same. This kind of marketing is a free and easy way to secure massive support.

Build a database. Actively seek out email addresses of people who will join the cause. Pass around a sign-up sheet at the local PTA meeting or in the teachers' lounge. Ask the local teachers' union for contacts. Save the addresses and build a list ready for action at a moment's notice.

Be original. One of the biggest no-nos in email advocacy is using form letters. School board members and legislators tend to dismiss them, even if they are sent in droves. Ask supporters to use their own words. It makes for a much more passionate and compelling campaign.