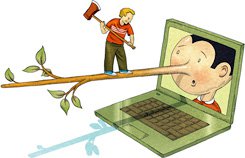 Brad Koepenick, a middle school theater and media-arts teacher in Los Angeles, takes little personal credit for winning the 2006 Charter School Teacher of the Year award from the California Charter Schools Association. Instead, he attributes his success to his subject matter: media literacy.

"People say, 'Oh, my God, the students are so engaged!' I say, 'It's called media literacy, and it is the future.'"

Koepenick is onto something. These days, media messages infiltrate people's living rooms and even their pockets via portable devices, and the power to create these invasive messages lies at the fingertips of anyone with an Internet connection. In this environment, it is inevitable that media-literacy education will work its way into more and more classrooms -- core subjects and media classes alike. And these lessons will expand to help students become wiser not only as media consumers but also as producers.

A common definition of media literacy is hard to pin down. The one used by Cable in the Classroom, the U.S. cable industry's education foundation, comes close: "Media-literacy skills empower students to access, understand, analyze, evaluate, use, and create messages in every medium, including paper, television, the Internet, cell phones, and PDAs." In the classroom, that might involve lessons on determining the validity of online information, gauging bias in the news, recognizing the implicit messages in advertising, identifying the tricks video producers use to make us feel a certain way, and producing powerful videos.

Individual teachers have been providing these lessons on their own for decades. But more members of the education community are realizing that it's not sufficient to do it scattershot. The curriculum now needs to go beyond instruction about savvy Internet searches in social studies, or analyzing sexy cigarette ads in health class.

"There are the beginnings of momentum," says Frank Gallagher, director of education and media literacy at Cable in the Classroom. "We're coming to an important point where you can really start a wave going."

Tessa Jolls, CEO of the Los Angeles-based Center for Media Literacy, says that only in the last year or two has she heard the words "media literacy" more frequently from Washington, DC, policy makers, and often they suggest it as a solution. South Carolina consultant Frank W. Baker has determined that every state's curriculum standards include some mention of media-literacy skills, though they're generally not tested.

Jolls credits business-backed groups, such as the Partnership for 21st Century Skills and Achieve, with helping bring these skills into the spotlight. An added incentive: Other developed nations, such as the United Kingdom and Canada, are way ahead.

A key difference between current and older iterations of media-literacy education is the emphasis on students as producers in their own right. At tender ages, children can produce media -- think of blogs, YouTube videos, MySpace profiles -- for mass consumption. As educators worry about how to guide students through this world, more and more are concluding that in multimedia, as in reading and writing, it's not enough to learn the skills of either consumption or production alone.

That's why Koepenick's Monday classes begin with the question "Who rented your eyes this weekend?" He says the five key questions promoted by the Center for Media Literacy -- about who created the message, what values they represent, and what tricks they used to achieve their purpose -- apply to almost every lesson. "I try to think about how you teach critical thinking," he says, "and I always come back to the media-literacy questions."

Good work like Koepenick's is making waves. He has taught for years in charter middle schools, and plans to bring his approach to younger grades as an elementary school theater teacher in the Los Angeles Unified School District this fall. In South Redford, Michigan, where Kara Clayton has taught media literacy at the high school level for more than a decade, her district superintendent recently asked her to help develop a full K-12 curriculum.

No one expects this practice to mushroom overnight, but it will spread into more classrooms, and, slowly, more schools, districts, and states. The attention is long overdue; ironically, it took a media inundation to highlight the need.