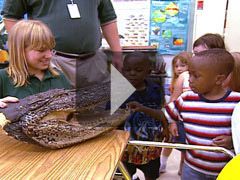 Christian is shivering with a combination of cold and excitement. It's a stormy April day, and the wind and rain haven't let up for hours. Although the weather has forced the cancellation of a class field trip, Christian is upbeat. The reason for his good mood? It's in the bucket he carries -- a slimy, wriggling creature the seventh grader has brought in to share with his classmates.

Barry Guillot, Christian's science teacher at Harry M. Hurst Middle School, in Destrehan, Louisiana, is as enthusiastic as his young student. "Oh, man," he says as he carries the bucket to the center of the room and beckons to the rest of the class. "Guys, come and take a look at this."

"This" is an amphiuma, a foot-long creature with a dark back and a white belly whose four tiny appendages make it technically a giant salamander, though it could easily be mistaken for an eel. Christian, who pulled the amphiuma from a rain-flooded drainage ditch in his yard at home, knew right away what he had found -- and he knew it would be welcome in Guillot's critter-crowded classroom.

Like all of Guillot's students, Christian is proud to be an expert on the plants and animals of southeast Louisiana. He is always on the lookout for a new creature to share -- and save. Christian is a Wetland Watcher, and that's a moniker he bears with pride and satisfaction.

The Wetland Watchers program, started by Guillot in 1998, is part of a schoolwide emphasis at Hurst on service learning, which combines activities designed to serve the community (from environmental-protection measures to volunteering at nursing homes) with specific learning objectives based on grade-level standards. For Christian and his classmates, the nearby LaBranche Wetlands are a real-life science laboratory where they learn about ecosystems by working to save them. Students monitor water quality, plant trees to halt coastal erosion, and educate others about the importance of environmental stewardship.

Read the interview with Barry Guillot to learn more about the benefits of service learning for students, teachers, and the larger community.

The program has been met with acclaim. The Post Foundation chose it as one of the five leading biological-sciences programs in the southeast United States, and an ABC documentary hosted by Diane Sawyer profiled it as one of the nation's top environmental projects.

The Wetland Watchers program also draws praise from its students. "We actually learn a lot more than we would just sitting behind a desk with a book, because you're out there and you're getting all filthy and muddy and having fun as you learn," explains seventh grader Kurt.

Guillot got the idea for the program six years ago, when the University of New Orleans and the Lake Pontchartrain Basin Foundation invited him and some students in his class to attend a service-learning field trip in the wetlands, doing the types of activities -- cleanups, water and animal study -- he would eventually adopt for the Wetland Watchers program. Guillot saw what a rich learning ground the area could be. Fresh from compiling seventh-grade science standards the previous year, the gregarious ex-bouncer and former army sergeant says he saw ways to meet standards everywhere. He started making phone calls for funding and permission almost as soon as he got out of the boat.

Grants came in for the persuasive Guillot, who says he approaches every potential partner with a list of reasons the partnership is a "win-win," and the district administration took a chance on an unconventional project.

To Hurst Principal Lorel Gonzales, the Wetland Watchers program is the perfect marriage of solid academics and commitment to community. "Kids need to realize the responsibility they have for their own community, wherever they live," Gonzales says. "Wetland Watchers makes science come to life for our kids, and it gives them a different viewpoint of what's happening in our community."

A Sense of Ownership

The combination of responsibility and hands-on activity bolsters students' self-esteem at a critical point. "Not only are they learning," Guillot says, "but they are also helping out. They are making a difference. And in middle school, when they are really trying to figure out who they are and where they're going, being able to be a positive contributing member of the community is so important."

The ownership of and pride in their projects that the students feel is evident. "I have over 149 service hours just this year," seventh grader Leigh says proudly. As part of the Wetland Watcher program, she continues, "you're helping, and you're having fun. I've presented animals, picked up trash, planted trees, and taught kids."

Seventh graders visit "their" wetlands area half a dozen times throughout the school year, often working with local partners from the University of New Orleans and the Lake Pontchartrain Basin Foundation, as well as Louisiana State University. While at the site, they might study macroinvertebrates using two-way aquatic magnifiers and a digital-imaging tool nicknamed a "scope on a rope," or they might test water quality -- very important for the state's seafood economy -- for problems such as fecal coliform bacteria. Analyzing the data and making hypotheses provides a focus for classroom activities between visits. Students come to understand what causes changes in the readings, and what those changes mean to area plants and animals. 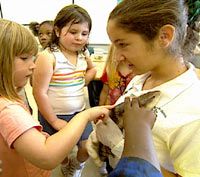 Communicating their findings is the next step. The students often divide into small "expert groups," each responsible for researching and teaching their peers, as well as individuals and groups outside of school, about various environmental issues. Guillot estimates that in the 2003-04 school year alone, his students spoke to more than 16,000 people throughout southeast Louisiana at festivals, celebrations, and conferences of such groups as the Louisiana Science Teachers Association.

After safety training, they also lead animal presentations to the delight of the four-year-old Head Start students on the Hurst campus. Guillot's students clamor to handle and expound on the native baby alligators and snakes that their teacher -- a reptile enthusiast who has bearded dragons and an iguana at home -- keeps in the classroom. They explain what is notable about each animal and what part each plays in the wetland ecosystem. "When you give them new facts, and see the expression that they give back and the interest they show from you actually showing them these animals, it's a great feeling," Kurt says.

Wetland Watchers help train their replacements, too, when sixth graders go along on wetland visits so they can become familiar with the duties they will assume in the next year. The trip gives the sixth graders something to look forward to: the cachet of being a Wetland Watcher helps offset the trauma of moving from elementary school to middle school. Guillot expects the seventh-grade Wetland Watchers to be good hosts and teachers for their younger charges. When, before a trip, he asks, "What is your main job?" the class yells out answers: "Help the younger kids!" "Get along with them!" "Be colleagues!"

A collegial spirit drives the program on many levels. Wetland Watchers is funded mainly by a grant from the Learn and Serve America Commission, sponsored by Louisiana's lieutenant governor, but it has also developed partnerships with more than thirty-five governmental and private organizations.

Along with their donations of plants and equipment, partners contribute considerable expertise. "I understand my limitations," Guillot says. "I'm not a soil expert, but I can call in my guy from Louisiana Agriculture and Forestry, who's been studying dirt for fifteen years. He can say everything I know about soil in the first five minutes and then take it further."

In return, partners get the satisfaction of spreading a message of change.

Milton Cambre, a local environmentalist and a member of the St. Charles Parish Coastal Planning and Zoning Committee who has been working to clean up the wetlands for most of his seventy years, believes that through the Wetland Watchers program, students have become custodians of an important part of local life. "The river is everything here," he says. "I grew up with the river. I've always been a part of it -- and I've seen too much of the wetlands environment disappear."

Cambre says the Wetland Watchers program teaches kids that "one person can make a difference." With its emphasis on sharing knowledge and creating partnerships, it also suggests that many people, working together, can have an even greater impact. As one seventh grader puts it, "It may take more than one try, but if we keep going out there picking up trash, we can make the wetlands a better place."