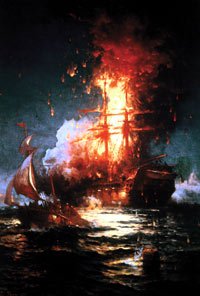 You don't have to know what dactylic hexameter is to be fascinated by The Iliad, Homer's epic tale of the Trojan War. Like a spear thrown in anger, the powerful poem drives the point home that war is hell, but when deadly conflict is described in a well-crafted tale, it can also take our imaginations captive.

The wrathful Achilles, the stalwart Agamemnon "mowing columns down in blood," and "the two called Ajax, Great and Little" are all characters from the imagination of a blind poet who gave us bloodshed at its literary best.

But the siege of Troy was more than 3,000 years ago, when things were relatively simple (though even Homer couldn't seem to decide which side he favored). Today, we live in a time when war takes place on the vast gray plains of ambiguity. Leaders may talk loftily about the battle between good and evil, but students must decipher a much more complex picture.

That complexity is reflected in the best books written about war, books that don't romanticize the harsh reality of combat. So, for teachers who want to help students come to terms with the what and why of humankind's oldest delinquency, we offer a small, admittedly random selection of some of the most compelling, honest views of war, often written by the warriors themselves. Any or all of these five books can provide a starting point for understanding the armed struggles being waged in the world, and the experience of war itself.

The Things They Carried

Thirty-odd years after the end of the Vietnam War, books about it continue to appear, reflecting the hold that wrenching conflict still has on America's collective memory. This collection of interconnected short stories blends fact and fiction to convey the haunting aura of Vietnam. "By telling stories, you objectify your experience," O'Brien writes. "You start sometimes with an incident that truly happened . . . and you carry it forward by inventing incidents that did not in fact occur but that nonetheless help to clarify and explain." Whether you call this fiction or nonfiction, it's a mesmerizing book.

Good-Bye to All That

The carnage and cruelty of World War I changed the world, and this autobiography is the English poet's swan song to a way of life. The tone is unflinching, but the style isn't as adventuresome as O'Brien's book. Much of Good-Bye's power lies in the first-hand look Graves gives of trench warfare -- wet, smelly, with huddled soldiers and mangled corpses and cramped passageways of dirt and rubble heavy with the threat of imminent death.

Graves, a young officer during the conflict, writes of censoring letters being sent home by his men, including one from a clueless soldier who reassures his wife French girls are "nice to sleep with," so she mustn't worry on his account. There's even the odd cricket match amid the artillery barrages, providing a brief interlude of civility. (Incidentally, the book was revised in 1957, which may cause some to question Graves's revisionist intentions.)

We Were Soldiers Once. . . and Young

This focused, crystal-clear picture of the chaos of battle recounts the fierce combat in the Ia Drang Valley, in Vietnam, in which 305 American soldiers and several thousand North Vietnamese regulars died. Moore and Galloway, a retired U.S. Army lieutenant general and a journalist respectively, were both there, and they tell the story of life-and-death struggle with straightforward prose augmented by tactical charts, black-and-white photographs, and a layout of dead soldiers' names across the book's opening pages -- an abbreviated memorial to Vietnam War veterans.

The Face of Battle

Along similar lines, The Face of Battle meticulously analyzes three historically significant battles: Agincourt, Waterloo, and the Somme. Keegan is a prolific military historian whose precise prose illuminates every aspect of the battle, including "wounds and their treatment," "the mechanics of being taken prisoner," and -- my personal favorite -- "the dimensions of the danger which different varieties of weapons offer to the soldier on the battlefield."

Blood Rites: Origins and History of the Passions of War

For a more circumspect look at war, read Blood Rites, which explores the uniquely religious feelings humans bring to war. The chapters titled "Sacred Meat," "The True Mark of the Beast," and "Three Cases of War Worship" make pointed observations about human nature and what may, alas, be our deep-seated instinct for warfare.

Damien B. M. English is a writer in San Francisco.

For students who want to continue reading about war and its consequences, here is a more complete list of works from the past three millennia: