Stretch your left arm out in front of you. Now bend it horizontally at the elbow and make a fist. Voilà! -- you have a cross-section model of California. Your bumpy left elbow is the Coast Range, the forearm is the Central Valley, and your clenched knuckle sandwich is the legendary "Snowy Range" itself: the Sierra Nevada.

The Sierra is a massive and forbidding escarpment that rises abruptly from the scrub desert of the Owens Valley outside of Bakersfield to gentle meadows 400 miles north near the Oregon border. Many of the mountains rear up 10,000 feet high or more; in the south, Mount Whitney, the highest peak in the Lower 48, rises to 14,505 feet.

A dozen or so challenging trail passes -- many skirting snow-fed streams -- snake between the range's brawny peaks, leading hikers up to sunny meadows and ice-cold blue lakes nestled in lushly forested enclaves. But travelers who head both up and over the state's grandest mountain range from the west will also find some of the Golden State's most incredible natural and historical treasures, nearly all blissfully light on tourists' feet and their wallets.

Here's a north-to-south survey of features along the southern half of U.S. Route 395, the often arrow-straight artery that parallels the eastern side of the Sierra Nevada for hundreds of miles:

Your first stop is the sprawling gold-mining ghost town of Bodie, its remains preserved in a state of arrested decay. It once boasted 10,000 inhabitants, more than any East Side town's current population.

Nearly all of California's female seagulls migrate to starkly beautiful Mono Lake. Every year, they fly hundreds of miles to lay their eggs on the lake's barren islands, which are inaccessible to predators.

The shoreline also boasts extraordinary tufa towers, vertical shafts of limestone that grow when underwater springs, rich in calcium, bubble up and come into contactwith carbonates in the lake. Tufa towers grow underwater, some getting more than 20 feet tall. (The reason visitors see so much tufa around Mono Lake today is because the lake level fell dramatically after water diversions began more than 60 years ago. You can blame a thirsty Los Angeles for that.)

Down the road near Mammoth Lakes, the Devils Postpile National Monument is a rampart of basalt columns five stories high. (Just an hour's hike away is 100-foot Rainbow Falls, the region's most impressive waterfall.)

Hot springs abound throughout the valley, most notably at the Hot Creek Geologic Site, a primitive spot close to Mammoth Lakes (use at your own risk), and at Keough's Hot Springs, a built-up commercial site outside Bishop, the largest of the handful of towns situated directly along 395.

The Ancient Bristlecone Pine Forest, high up in the White Mountains, outside of Bishop, is dotted with gnarled millennia-old pines, the most aged living trees on the planet. They're not nearly as majestic as the fabled coastal redwoods, but it's hard not to be impressed by something that was a sapling during the days of Julius Caesar. (Be sure to bring extra water and a jacket; when you're nearly 2 miles above sea level, the weather can turn cold very quickly.) 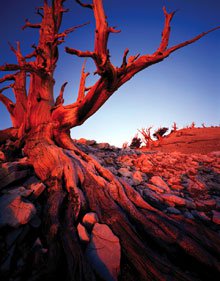 The gentle summit of nearby White Mountain, just a couple hundred feet shorter than Mount Whitney (see below), is accessible via a trailhead at 11,650 feet -- though the round-trip hike to the top is 15 miles.

Not long after the Japanese attack on Pearl Harbor, the federal government began rounding up more than 100,000 West Coast citizens of Japanese descent, civil rights be damned. More than 10 percent of those unfortunates were relocated to this area. The locale of one of the most infamous of those concentration camps is now the Manzanar National Historic Site. A visit there is a humbling and emotional experience.

Before you go, be sure to read Farewell to Manzanar, Jeanne Wakatsuki Houston's account (written with her husband, James A. Houston) of her life there as a child internee. Then assign the book to your students in upper elementary school or middle school in the fall.

Like White Mountain's summit, that of Mount Whitney is accessible, but a permit system is in effect to handle its heavy traffic. Also, only superhumans can do the much more rigorous 22-mile round-trip trek without camping overnight; plan for a multiday backpacking trip.

Fall for the East Side

September and October are the best times to visit the East Side: Traffic is light, weather is mild, and the many patches of aspens and other deciduous trees light up as if they think they're in New England. July or August are better for educators on a traditional schedule, but the Owens Valley, despite being several thousand feet above sea level, scorches in the summer; wintry conditions prevail the rest of the year.

Whether you're setting out on a historical-landmark tour or on a wilderness expedition (or something in between -- many lakes and creeks are only steps away from a parking area), you'll find the East Side of the Sierra Nevada an experience waiting to happen. Just bring your sense of adventure.