What does a well-equipped classroom look like in the 21st century? Few would deny that it needs to include technology tools for teaching and learning. But which tools? How should teachers use them to best serve the needs of a diverse group of learners? Should we set any limits on access? And how might the use of these tools reshape teaching practices?

Questions about technology integration persist, even after more than half a century of research documenting the use of technologies such as television and the benefits of using computers for learning. But for students who have grown up in a digital world, there's no debate. They're already active users of technology outside of school. The challenge is leveraging the opportunities technology creates to prepare learners for a globally connected, information-saturated world.

Where the Vision Begins

Seymour Papert, a professor at the Massachusetts Institute of Technology, was among the first to recognize the potential of technology to fundamentally change the learning enterprise. During the 1960s, after collaborating with renowned Swiss psychologist Jean Piaget, Papert developed the Logo programming language and began introducing it to children. Designed to be simple enough for those who do not yet have sophisticated mathematical understanding, Logo enabled students to use the computer to take control of their learning environment. With minimal instruction, they were able to write -- and debug -- programs that controlled the movements of a turtle robot. They not only gained deeper understanding of geometry concepts along with programming expertise but also showed an engagement in learning that's rare in more traditional, drill-and-practice classroom activities.

In a 1970 interview with Computer Decisions, Papert said, "With computers, there is a substantially bigger chance that you can lead the child with less effort into something he really likes doing. . . . The intersection with the set of fun things with the set of educational things is sufficiently big so that you should be able to keep every student internally motivated."

Since Papert's groundbreaking work, the tools available for learning have become increasingly powerful and widespread. At the same time, barriers to using technology have steadily diminished. Today's learning landscape includes an almost dizzying array of tools, from inexpensive personal computers and handheld devices to interactive whiteboards, digital video cameras, and a constantly expanding suite of Web 2.0 tools. Disparities persist between technology-rich schools and those that have limited access to outdated equipment. But after a decade-long effort to expand access and close the digital divide, nearly every public school in the United States has been connected to the Internet, making it possible to connect students to the world.

A substantial body of research has documented a range of benefits for learners when all this technology is integrated effectively into instruction. Research scientist Harold Wenglinsky, looking at math achievement scores in a 1998 Educational Testing Service study, found positive benefits for educational technology, as long it was used for challenging activities such as simulations. Using computers to drill students on fundamental skills, in comparison, had a negative impact on achievement. Researchers have determined that, when used for more ambitious learning goals rather than basic skills, technology can help students develop higher-order thinking skills, creativity, and research abilities. 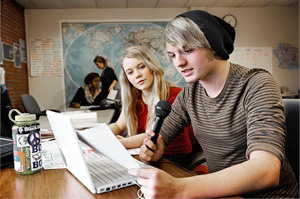 In a 2000 report, a team from SRI International identified four ways that technology enhances how children learn: It offers active engagement, the opportunity to participate in groups, frequent interaction and feedback, and connections to real-world contexts. Technology also expands what students can learn by providing them with access to an ever-expanding store of information. Yet the same researchers (Roschelle, Pea, Hoadley, Gordin, & Means) emphasized that merely making computers available does not automatically lead to learning gains. They described technology integration as only one element in "what must be a coordinated approach to improving curriculum, pedagogy, assessment, teacher development, and other aspects of school structure."

According to learning-science experts, the increasingly interactive nature of technology, exemplified by Web 2.0 tools, creates new opportunities for students to learn by allowing them to do a task, receive feedback on it, and then build new knowledge. In How People Learn: Brain, Mind, Experience, and School, authors John D. Bransford, Ann L. Brown, and Rodney R. Cocking explain that technology can be used to advance learning by

Today's technology tools also support what experts understand about the social nature of learning. "Technology resources for education . . . function in a social environment mediated by learning conversations with peers and teachers," explain Bransford and his colleagues.

Social media opens new possibilities for connecting learners and taking education in new directions. Digital gaming, simulations, and social networking, for example, offer opportunities "to convey concepts in new ways that would otherwise not be possible, efficient, or effective with other instructional methods. In other words, these technologies don't just help us teach the old stuff in new ways -- they can also help us teach new stuff in new ways," report MIT researchers Eric Klopfer, Scot Osterweil, Jennifer Groff, and Jason Haas in their paper "Using the Technology of Today, in the Classroom Today."

Although schools have been slow to bring social media into the classroom, many students are using digital tools on their own to create and publish content, connect with acquaintances, and pursue their own interests. The book Hanging Out, Messing Around, and Geeking Out summarizes three years of study about kids' informal learning with digital media. The authors found that kids use these tools to extend friendships, navigate the challenges of adolescence, and pursue self-directed learning, sometimes in great depth.

Becoming literate in the 21st century puts new demands on learners to be able to use technology to access, analyze, and organize information. The International Society for Technology in Education (ISTE) updated its National Educational Technology Standards for Students (NETS) in 2007 to better describe the skills needed to learn and live in an increasingly digital world. "The ISTE Standards for Students" now includes creativity and innovation, communication and collaboration, research and information fluency, critical thinking, problem solving, decision making, and digital citizenship along with technology operations and concepts.

The Partnership for 21st Century Skills lays out a similar vision in its framework. "To be effective in the 21st century, citizens and workers must be able to exhibit a range of functional and critical-thinking skills such as information literacy, media literacy, and technology literacy," states the organization.

Teachers also need to develop new understanding to capitalize on the learning potential of technology. In a report for the foundation Cable in the Classroom, James Marshall found that educational technology "complements what a great teacher does naturally. . . . With ever-expanding content and technology choices, from video to multimedia to the Internet, there's an unprecedented need to understand the recipe for success, which involves the learner, the teacher, the content, and the environment in which technology is used."

Teachers who don't make regular use of classroom technology, Wenglinsky and other researchers have consistently found, lack experience using it. With in-depth, sustained professional development in technology integration, teachers are more likely to bring technology into teaching and learning.

The latest National Education Technology Plan, "Transforming American Education: Learning Powered by Technology," was released in November 2010 by the Department of Education. It outlines a vision "to leverage the learning sciences and modern technology to create engaging, relevant, and personalized learning experiences for all learners that mirror students' daily lives and the reality of their futures. In contrast to traditional classroom instruction, this requires that we put students at the center and empower them to take control of their own learning by providing flexibility on several dimensions."

The plan also calls for "connected teaching" in which educators connect to "resources and expertise that improve their own instructional practices and guide them in becoming facilitators and collaborators in their students' increasingly self-directed learning."

Although the tools have changed dramatically since the early days of educational technology, this vision of using technology for empowered, self-directed learning has remained constant -- and consistently hopeful.