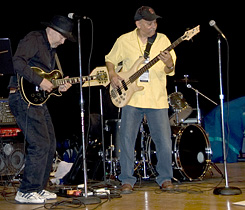 Professional drummer and drum instructor Ronnie Ciago is up on the stage of the Little Theater at La Puente High School, in La Puente, California, near Los Angeles. Without preamble, he sits down at his drum set and runs through a crashing, rocking riff that stuns to silence the twenty or so kids in the class.

When he stops, the kids whistle, whoop, and clap. As the noise dies down, Ciago's colleague, Bob Barboza, begins his lesson on world rhythms, with Ciago poised to demonstrate.

Not Your Average Substitutes

The brainchild of Barboza, a retired teacher, the Super Subs program is a way to bring arts and music to underserved students. Barboza recruited a group of friends -- some of whom once played together in a semiprofessional band -- to be the subs. At first, the idea was to give back to schools in the community where they all grew up. But after experiencing success at their local schools, they decided to take their show on the road.

An Antidote to Teaching to the Test

The day the Super Subs visit La Puente starts like any other. All the students attend their usual first-period classes. For the hundred or so kids in the school's Multilingual Academy (for English-language learners) and Folklorico programs, though, everything changes when the second-period bell rings. Their teachers have arranged a Super Sub day for them.

Credit: Lauren Elliott
Chorus Line: Students and teachers sing and dance as the Super Subs rock the crowd at a midday concert.

Credit: Lauren Elliott
Chorus Line: Students and teachers sing and dance as the Super Subs rock the crowd at a midday concert.

They meet the day's ten visiting Super Subs in the auditorium for an orientation and introductions, then head to classes held in the theater, the library, and three classrooms. While Barboza is investigating rhythms, a professional dancer and choreographer from Las Vegas is teaching street moves in the auditorium. In a classroom between the two, a guitar-playing sub talks about math and music while another, a professional motivational speaker, winds up the class by talking about dreams and aspirations.

English teacher Noel Martinez says the Super Subs' visit is a treat for his English-language learners, who are liable to think of school as something to endure rather than enjoy. "It brings in different voices, showing them that other professions are available to them," he explains. "It's not coming from their regular teachers, and it's not from their parents, so maybe they'll listen."

"It takes a variety of media to reach everyone -- we just have to find the right hook," comments Nancy Gibson, the teacher responsible for the Super Subs's La Puente visit. "Our kids don't necessarily get experiences like this. You know how when you think back to high school, there were a few days when something happened that you really remember as being great? I want this to be one of those days for these kids."

Two doors down from the motivational speaker, Super Sub Caren Singer is instructing her students to write. She gives them blank journals and tells them to write something every day. When this direction gets a lukewarm response, she asks them, "Who here has experienced terror?" Ernesto, a junior in a bright blue shirt, is the only one to raise his hand.

When she asks what it was like, he speaks down to the table, but she hears him and shouts, "Yes! It made you feel cold, and your throat closed up, and you couldn't speak or move. Yes!" When she adds, "One time, I was so scared I peed my pants," a ripple of amusement passes through the room.

She hands around bottles of scent and asks the students to think of words they associate with the smell. "Think of a season, think of a color, think of a sound," she exhorts. As the kids call out words, she writes them on the board.

A smart aleck at the back of the room says, "Underwear," making everyone snicker, but Singer just responds with a serious tone, "That's brilliant, very creative, good." Not getting a rise out of her, the would-be joker gives up and gets back on task.

Once she has the lists of words for the various scents on the board, Singer asks the students to put the words together into a poem. Embarrassed grumbling results. "Trust yourself," she says. "There is no right or wrong." When she reads out the poems the students have written, the Super Sub exclaims over each unusual juxtaposition. By the time the class is over, most of the kids are writing, writing, writing, and they want to show her everything they've written.

When the bell rings, Singer returns to her stated objective for the class: "I would like you to walk out of here today with a vision of yourself as a writer." As they each clutch a journal and file out to the next Super Sub class, it's possible that's exactly what the students are thinking.

Later, after a lunchtime concert by the Super Subs that leaves the impressed students asking for autographs, Ernesto -- the student who spoke up during Singer's writing class -- reflects on the experience. "My dad is a janitor at UCLA," he says, "but I want to do something better, do well in school and go to college."

The message of the day, that you can achieve what you aspire to achieve, is not news to him, but he says the way it was presented was entirely different. "They did it with music and it was . . . wow," he states. "This is the first time in three years here I've seen anything like this." Then he smiles widely and adds, as though he invented the idea, "You learn better when you're having fun."