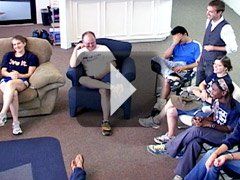 Ask anyone at YES Prep North Central about the key ingredient of the school's success, and he or she will say, "People, people, people." And it's true -- the passion and determination among the adults infects the students. Kids can hardly complain about the long hours or heavy workload, because their teachers -- 60 of them, mostly in their 20s or early 30s -- work just as hard, or harder. Bryan Reed, who became high school principal this year while continuing to teach social studies and coach basketball, even has his mail delivered to the school.

Maintaining this level of teacher performance isn't as simple as plucking already-stellar educators from the top of the talent pool. "We realize we're going to have to go out and find great people and teach them how to be great teachers," explains YES Prep founder Chris Barbic.

Nurturing a culture of respect and collaboration among administrators and teachers (many of whom come from Teach for America) has been essential in building the YES Prep teacher corps. Forgoing traditional notions of hierarchy, staff members rely on each other for ideas and constructive criticism. They even stage an annual "observation challenge," in which teachers pop into each other's classrooms to observe and offer feedback. Everyone on staff is working toward one thing -- ever-better teaching -- and no one is working alone.

When Bryan Reed first arrived, the cohesion seemed almost unnatural. The Florida native was a Teach for America veteran from New Orleans's Ninth Ward, where one of his colleagues routinely slept through class and a student showed up at school with an AK-47 under his arm.

"I came from my own little island in a sea of incompetence and burnout," he says. "Teaching had been a battle in the trenches fighting for my kids. YES Prep didn't seem realHow could all these people be on the same page and getting results?" 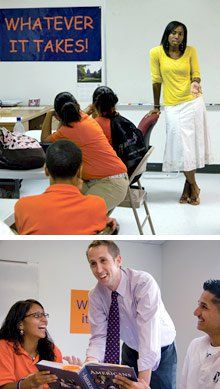 Part of the success comes from the fact that no teacher at YES Prep is ever left on her own. Dean of Instruction Michelle LaFlure, herself a former YES Prep teacher, visits every classroom at least every other week. As she sits down with first-year Spanish teacher Andria Groover, there is no hint of tutor-pupil hierarchy. It's two creative people fine-tuning their best ideas.

LaFlure's rubrics measuring teacher performance are just as detailed as those used for students. Following up on Groover's recent lesson on the Incas, LaFlure praises her efforts to create a student-centered classroom where the students share with and learn from one another, as well as their teacher. "You talked to them for only seven minutes. That is awesome, especially for a first-year teacher," LaFlure says.

Though it's unusual for an aggressive, college-prep school, LaFlure, Reed, and colleagues push each other toward project learning. Craig Brandenburg (a member of Edutopia's National Advisory Council) was a YES Prep math teacher until he tapped into his passion for video production and created a multimedia class and student-run production company. His video-production students make audio slide shows of their favorite children's books and donate them to their former elementary schools. In Katie Norwood's seventh-grade English class, students joined an international program called Books of Hope to create class-worthy textbooks for students in Uganda on topics like the solar system and baseball.

But for all their enthusiasm, even YES Prep teachers occasionally get the blues. "Already, still early in the year, we've lost a couple of kids to other schools," Reed says. "There are days that can be really horrible and frustrating."

What keeps Norwood going is this: "I love working with the kids. I love the freedom that I'm given here. I love the fact that the sky's the limit. There are leadership opportunities for me. There's support. There's people I love. I'm exhausted all the time. It's a really, really hard job. But I'm always driven to do more."