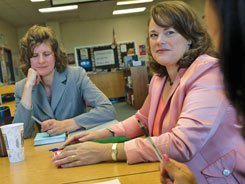 For all of YES Prep's accomplishments, another test -- perhaps the ultimate one -- is just beginning: spreading its success throughout Houston and beyond. For many charter schools, the development of good practices that can flow to regular public schools is the truest measure of achievement. Today, North Central and the other YES Prep schools are islands of promise that serve only a fraction of the families that live all around them. The seven campuses, which have 3,500 students total, have 6,000 kids on the waiting list.

"We don't win by getting to be the darlings of the media because we've gotten great results," YES Prep founder Chris Barbic says. "We win if more schools become great because of what we're doing. It's time to get this out of the petri dish and take it to scale."

The effort has started. Nearby Hogg Middle School and the new Ninth Grade College Preparatory Academy have been working to remake themselves with guidance from YES Prep. And the YES Prep organization itself plans to open six more schools within the next seven years.

Hogg is a cavernous old school in a lush, gentrified Houston neighborhood called the Heights, where many of the local children go to private or magnet middle schools. Many lower-income kids from other neighborhoods attend the school.

Local parents of elementary-age kids have set out to make Hogg a school they and their neighbors want to send their kids to, which means higher test scores, tighter discipline, and a college-prep curriculum -- changes they believe will benefit all children, not just their own. The former principal and several teachers have visited YES Prep North Central to glean ideas, and they're laying out a plan for change.

The Ninth Grade College Preparatory Academy is a state-ordered spin-off of Sam Houston High School, whose test scores have historically been so low that the state labeled the school "academically unacceptable" for six straight years. (Last spring, however, its scores shot up dramatically). Founding principal Rolando "Rudy" Trevino, now principal at another Houston high school, who built, planned, and designed the academy in 40 days in summer 2008, relied heavily on advice from his friends in the YES Prep schools. The reformers at the academy and Hogg don't intend for either school to look exactly like YES Prep, but they want to borrow certain key ideas, like the college-bound culture and RISE (Restoring Individual Student Excellence), YES Prep's discipline program.

For their part, Barbic and North Central school director Mark DiBella are eager to provide these schools advice and potentially a temporary teacher exchange. Some YES Prep teachers, like Reed, want someday to go back to traditional public schools. But YES Prep enjoys advantages that Hogg and the academy don't. As a charter school, it can fire underperforming teachers more easily -- though DiBella emphasizes that he rarely uses this option. It can also expel students more easily, though again, that's rare. (North Central expelled four last year.) Even the biggest champions of YES Prep say it's not for everyone: DiBella's own wife, for example, left the school after having children in order to spend more time with them. 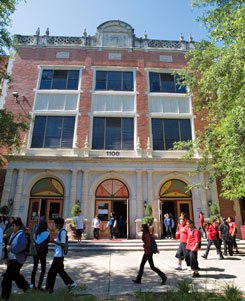 And walking the halls and grounds of Hogg last spring with then principal Imelda Medrano, I could sense, without anyone having to explain, what her reform effort was up against. As she walked, Medrano picked up litter from the playground and had to field question after question radioed in by walkie-talkie from her office on the floor below. Compared with YES Prep, the school felt massive, old, and unwieldy, with scarcely contained chaos bubbling right below the surface.

Mayra Valle and her North Central classmates are already talking about how, when they cross the commencement stage in May, the raw emotions of the moment will bring them, their families, and their teachers to tears. Their lives are changed. Yet the enduring value of YES Prep and charter school efforts like it may ultimately be measured in outcomes elsewhere: Will they effectively feed the reform efforts at struggling schools like Hogg and the Ninth Grade College Preparatory Academy? Will those schools, in turn, ultimately succeed?

From what I've seen, I doubt every school could -- or should -- be just like YES Prep. But very few would not be better off for adopting some of YES Prep's ideas. What the school does best, besides get kids to college, is push the envelope. Its success sends the message: No excuses. This can be done.

The parting words to DiBella from the first group that came to visit YES Prep from Hogg were, "We can do this." DiBella now adds, "I believe that."

If we want to change education in the United States -- more profoundly than we can by reforming curricula or standardized tests or teacher-certification policies -- we have to believe, too.