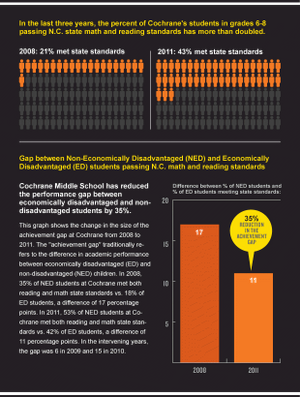 The Power of Professional Development

According to a recent study in the journal Science, methods like those used in Interactive Learning increased learning for all students and decreased the achievement gap between economically disadvantaged and non-disadvantaged students in a large, introductory-level college biology class.

The Interactive Learning methods used at Cochrane have helped narrow their achievement gap from 17 points in 2007-08 to 11 points in 2010-11, making it less than half the 30-point achievement gap that exists throughout the state as a whole. In North Carolina in 2010-11, 82 percent of non-economically disadvantaged middle school students passed both the reading and math standards, compared with just 52 percent of economically disadvantaged students.

Goals to Work Toward

The non-negotiable teaching strategies used at Cochrane are reinforced in a collaborative and supportive environment, with three weekly grade-level meetings for teachers. These include weekly "data meetings" during which they analyze student performance and background characteristics. By regularly reviewing student data from different classes and from different support specialists over time, teachers can better understand where students are coming from and address their needs.