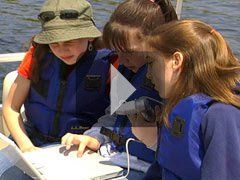 "You cannot grasp the power of this idea until you go into one of these seventh-grade classrooms," says former Maine governor Angus King, who fought a difficult political battle to get the laptop project moving. "You can almost hear, 'Eureka!'" In its second year, 36,000 Apple iBooks have been provided to all seventh- and eighth-grade teachers and students.

"We made the absolute right decision to do it," says Bette Manchester, distinguished educator with the state's Maine Learning Technology Initiative. "And I think if people are really serious about school reform and leveling the playing field, raising the bar for all kids, these are tools that can really support change."

What visitors see is a new kind of learning, in which students are given the authority to seek out information from a wealth of resources and translate that information into forms far beyond term papers or worksheets. They may produce a video project or a Web page using animation or claymation. They may incorporate math, science, history, language arts, and music. Their projects may have so much value beyond the classroom that communities want the projects to be shared. And the fact that they have the laptops throughout the day makes the use of technology second nature.

"I love technology," says August, an eighth grader at Nobleboro Central School near Maine's midcoast. "We can find things out for ourselves [on the Internet], and it's just more interesting to do that." August's Dad, Bernard, is also pleased with the laptops, which he says have significantly cut down on the need to nag about homework and have added to the A's on August's report card.

"I think that by building in an element of fun you sneak learning in through the back door," agrees Ann Brown, a science teacher at Helen King Middle School in Portland.

What Freeport Middle School Principal Chris Toy likes about the laptops is that the students, who he refers to as "digital natives," "are clearly more engaged in their learning. Giving laptops to every student makes eminent sense," he adds, because "what was happening outside of the schools needed to happen inside the schools."

After a day on the water with the Maine Lakes Conservancy Institute, students from Nobleboro Central School enter their collected data into their laptops.

Experts also see positive results so far. Anne Davies, a Canadian researcher who was hired by the state to do a qualitative study of the laptop project, spent four months -- September, October, November 2002, and May 2003 -- at Pembroke Elementary School in rural Washington County, the poorest county in the state, where the nearest supermarket is 25 miles away and the nearest bookstore is 75 miles.

"I'm very, very impressed, and I couldn't encourage people enough to look at doing this for their students," says Davies. "I knew they'd be engaged with the technology, but in terms of learners being deeply committed to their learning, I had no idea that would be as powerful as it is." She refers to students' willingness to help each other, to go to everyone from school secretaries to teachers to visitors like Davies seeking critiques of their draft essays or projects. The "learning circle" is not confined to the school, either, Davies says. Students e-mail peers at other schools and experts, and videoconferences are in the works.

"The Maine Learning Technology Initiative: Teacher, Student, and School Perspectives," a March 2003 study by the Maine Education Policy Research Institute, also found good results. "Teachers are finding that their lessons are more extensive, use more up-to-date resources, and provide more opportunities to explore knowledge and information more in depth," the report states. Students "report an increase in interest in their schoolwork and an increase in the amount of work they are doing both in and out of school. The nature of student learning in classrooms may be changing because the students have the tools to pursue, organize, analyze, and present information more readily at hand."

Students themselves hone in on the practical benefits: "I'm more organized," says Eric, an eighth grader at Skowhegan Area Middle School. "Before, I lost papers. Now I don't lose anything. It's a lot easier to have one laptop that contains homework and not have to transfer between home and school computers."

"It's better than reading a book," says Charlotte, another Skowhegan eighth grader, a former 'B' student in social studies who is now getting 'A's,' in part because of her enthusiasm for researching and reading on the Internet. Charlotte also notes that knowing how to use the laptops "will help us in the future" because computers are everywhere in business. "One thing I enjoy about the laptops is the amount of resources we have," agrees Skowhegan classmate Brian. "You can search the Internet, World Book, anything. It's so much better."

Nobleboro's August reflects on how it's so much more efficient to have computers at the ready rather than have to schedule use of them in a school lab. Nick, an eighth grader at Freeport Middle School, says he's much more interested in school since he got a laptop -- an interest that has translated into better behavior. His days of disrupting the class and being sent to the principal's office, a fairly common occurrence in sixth grade, are over, he says. "The laptop occupies you more in class," Nick explains, noting that if he's not drawn in by research on one site, all he has to do is check out another site. There's not much time to get bored and antsy. With a textbook, he was stuck with what was on the page -- engrossing or not. Writing, research, and homework also are just "easier" with the laptop, he says. Besides being a better-behaved student, Nick is a more studious one. His grades are now C-pluses and B's rather than D-pluses and C's.

Nobleboro science teacher Ken Williams gets some help from his son in making a voice homework assignment that is transmitted to students.

Teachers and administrators have other observations. Unlikely as it may sound, science teacher Ken Williams of Nobleboro Central School says he is able to have more individual contact with students because he can have e-mail chats about their particular problems or interests while class is in session. His wife, Barbara Williams, a teacher at Hope Elementary School and a laptop teacher leader, no longer has to "ballpark it" or delay getting a precise answer to a student question. She just tells the student, "Go look it up." Matt Whaley, a science teacher at Cape Elizabeth Middle School, says he has never seen students so "hooked in," especially when concepts such as mitosis become moving, visual processes on the Internet as opposed to static pictures in textbooks. Paula Smith, principal at Pembroke Elementary School, says she's seen the aspirations of her students change because they suddenly see possibilities beyond what their parents and neighbors do.

A significant advantage of the laptops is that writing is no longer the chore it was. "Think about how much easier it is to write and edit a paper on a word processor than it is by hand," says former Governor King. "When I was a kid and the teacher said, 'Rewrite this,' it was agony because you maybe only had to change two sentences but you had to physically rewrite the whole thing, and it was awful. What we are finding is ... kids that have keyboard skills write more words by a factor of two."

Language arts teacher Beverly Bisbee has found that students not only write more, they write better. Bisbee, who postponed retirement from Cape Elizabeth Middle School because she was so excited about the laptop program, says the gender differences in writing she has seen in thirty years of teaching are disappearing. "Girls by nature would follow my instructions and do what I wanted, but oftentimes, their writing was boring," she explains. Boys, on the other hand "didn't seem to care about the rules, but they cared about the content" With the laptops, "the problem with mechanics [for the boys] just seemed to fall in place. And then I noticed that the girls didn't have to worry about [the mechanics] anymore, so they began to add the supportive detail that they needed to make their writing more interesting."

Fading Footprints, which focuses on Maine's endangered species, was researched and produced by students at Helen King Middle School in Portland.

Student thinking has been forced to get more sophisticated, says Skowhegan Principal John Krasnavage. He offers the examples of the myriad charts and graphs available through computer software and the Web to illustrate their thinking. "When I was in school, the bar graph was the chart of choice," he says. Now students can choose from a long list of charts and graphs and can even superimpose them on each other to do comparisons and contrasts. Just determining what table is most appropriate requires deep thinking on what ideas are being conveyed and how best to convey them.

The laptops have spurred a host of projects that often cut across disciplines and allow students to go more deeply into subjects, in contrast to "mile-wide, inch-deep" instruction. Such projects, says Ship Bright, executive director of the Maine Lakes Conservancy Institute (MLCI), help answer the question: "How do we make these laptops more than a $2,000 pencil?" The projects also often include hands-on, real-world work that benefits or has a link to the community:

Principals report that students have shown great responsibility in taking care of the laptops, with very little loss or damage. While there has been the occasional broken screen or lost laptop, such incidents are rare. Skowhegan Principal Krasnavage notes that the students are doing a lot better than adults in caring for the $1,200 machines. At his school, no laptops have been lost. At O'Hare Airport in Chicago, he notes, "they find a couple of dozen a day."

Angus King, Maine's governor from 1995 to 2003, calls the laptop program "the largest educational technology project in the history of the world."

Despite all the glowing reviews, however, there is a major glitch in the program, according to eighth graders. "We won't have them next year," laments Skowhegan eighth grader Emily, referring to the fact that the Legislature and governor have made no commitment to provide laptops to other grades. "It's going to be like going back to kindergarten."

What do you think of Schools that Work?
Tweet your answer to @edutopia.