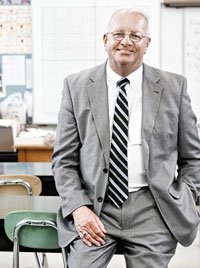 During my senior year of college, I taught math to 26 inmates, none of whom had finished high school. What I faced was 26 examples of the failure of American education. What I did not realize is the profound effect this would have on my career as a school leader. After teaching for five years, I became a principal because I felt that I could help underserved kids better in that role. Here are ten ideas I have learned in the 30 years since I became a principal.

If you start making decisions based on avoiding conflict, the students lose. This is what sustained me through one of my most difficult decisions. I asked the school district to let our school health center offer birth control after four girls became pregnant in one semester. For this group of kids, the health center at King was their primary health care provider. Although we offer birth control to our students, we are not the birth control school; we are the school that cares about all of its kids. This decision was the right one, and it cemented for all time the central values of King.

2) Create a Vision, Write It Down, and Start Implementing It

Don't put your vision in your drawer and hope for the best. Every decision must be aligned with that vision. The whole organization is watching when you make a decision, so consistency is crucial.

The secret of managing is to keep the guys who hate you away from those who are still undecided. (That's adapted from Casey Stengel.) Hire people who support your vision, who are bright, and who like kids.

4) Paddles in the Water

In Outward Bound, you learn that when you are navigating dangerous rapids in a raft, the only way to succeed is for everyone in the boat to sit out on the edge and paddle really hard, even though everyone would rather be sitting in the center, where it's safer. At King, in times of crisis, everyone responds with paddles in the water.

5) Find Time to Think During the Day

They pay me to worry. It's OK to stare at the wall and think about how to manage change. I have 70 people who work at King. Even the most centered has three bad days each school year. Multiply that by 70 people and that's 210 bad days, which is more than the 180 school days in a year. So, me, I am never going to have a good day -- just get over it.

6) Take Responsibility for the Good and the Bad

If the problems in your school or organization lie below you and the solutions lie above you, then you have rendered yourself irrelevant. The genius of school lies within the school. The solutions to problems are almost always right in front of you.

7) You Have the Ultimate Responsibility

Have very clear expectations. Make sure people have the knowledge, resources, and time to accomplish what you expect. This shows respect. As much as possible, give people the autonomy to manage their own work, budget, time, and curriculum. Autonomy is the goal, though you still have to inspect.

When my son was little, I was going through a lot of turmoil at King, and I did not feel like doing much of anything when I got home. One day, I just decided that whatever he wanted to do, I would do -- play ball, eat ice cream, and so on. I realized the power of yes. It changed our relationship. The only progress you will ever make involves risk: Ideas that teachers have may seem a little unsafe and crazy. Try to think, "How can I make this request into a yes?"

Twenty percent of people will be against anything. When you realize this, you avoid compromising what really should be done because you stop watering things down. If you always try to reach consensus, you are being led by the 20 percent.

If you wait too long to make changes to a school culture, you have already sanctioned mediocre behavior because you're allowing it. That's when change is hard, and you begin making bad deals.