Today's kids are hardwired in a fundamentally different way than most of the adults who teach them. Every child from high school on down grew up immersed in a world of technology. None have known a world without visual computing. Many never saw a day in which broadband Net access wasn't delivered directly to one of the two or three PCs in their house. Other items within easy daily reach include a DVD, various cell phones, and game consoles.

Yet the typical school reflects little or none of this technology. There is an enormous disparity between the world in which the students live and their life in the formalized educational environment of the classroom.

Your students are crazy about tech. We also know they'd like to use it more in the classroom. So, earlier this spring, we asked teachers to ask their students a few simple questions: "What technology do you use outside of school that would be good for the classroom? Why? How would that work?"

Here's what the students came up with.

This is an obvious selection, but it's one that needs to be noted. "I have often thought that it would be great if we all had laptops and if the heavy books, paper, folders, and pencils were eliminated," a student suggests. "We all do all of our work on computers anyway, and isn't that how it will be in the workplace, too?" Says another, "Why don't the book publishers put all this material online? That way, it is easier to come out with new editions of texts, too." Why not, indeed? (See the profile of Richard G. Baraniuk in "The Daring Dozen: 2007.")

This wireless-connectivity standard provides a way to exchange information between electronic devices such as mobile phones, laptops, PCs, printers, digital cameras, and video game consoles over a secure short-range radio frequency. Install it on all your school's tech so students can send information from cameras and cell phones onto school computers.

Example: If you have a photo on your cell phone you like and could use in a project, just send it over Bluetooth onto the computer -- so simple. (FYI: A personal computer must have a Bluetooth dongle in order to be able to communicate with other Bluetooth devices. A dongle is a small hardware device that connects to a computer to authenticate a piece of software.) Some devices already contain an internal Bluetooth dongle, but most computers require buying an external USB Bluetooth dongle, which starts at about $20.

It's an essential item for staying in touch -- what teen doesn't have one glued to his or her head most of the day? It's also a great device for the classroom. One example: A new interactive service called Mobile Prep allows students to create and flip through electronic flash cards displayed on their cell phone. Mobile Prep can also automatically generate questions based on the student's proficiency. Online, users can share and sell decks they generate, and teachers can upload new decks they create.

Other uses: Call a parent whose child has just excelled in class, or simply use the phone's notification feature to ring as a reminder to study for a test.

Use it to photograph what's written on the whiteboard (such as a list of vocabulary words or a homework assignment) that may be too laborious to copy by hand.

One student confesses that this suggestion "may be the nerdiest of all the replies," but we think she sells herself short.

"My graphing calculator is so portable and user friendly that I find it fun to search for new applications on the manufacturer's Web site, explore my calculator's downloadable periodic table, and create my own programs to solve kinematic equations in physics," she adds. "My calculator can manipulate data quickly, and its powerful applications are endless!

"So, although my TI-84 may not be the flashiest new gadget or the sleekest tool in the box, I really think students could take advantage of it a lot more."

Since when is being smart not cool? 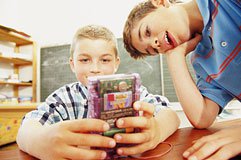 We know what you're thinking: the ultimate time waster. Not true. The addictive handheld game console has several brain-building programs/games. Brain Age -- in which you are asked to do simple equations quickly or divide words into syllables, as well as various other learning games -- is really terrific. You can even connect several DSes and race other people doing the equations.

"I would love to have it at school," one student pleads. Another game high on the list is Phoenix Wright: Ace Attorney, a graphic adventure novel set at the beginning of a young lawyer's career. You're involved in a series of criminal investigations, with the usual assortment of dead ends, false clues, and questionable characters. Great for critical-thinking skills.

Tape the class, study it later. Or, better still, post it to your school's Web site for other students to download.

An excellent way of carrying an enormous amount of information home -- without the shoulder pain associated with overloaded backpacks. A 1-gig drive costs about $25 and can store hundreds or thousands of items.

Forget that awful clanging bell, which for too long has signaled the time to move between one class and the next. Instead of bells, music could play during the precious few minutes the students dash from class to locker and back to class. Students can request the songs or, better yet, win a chance to nominate selections.

Teachers have separate remote control units for their classroom television, DVD player, projector, camera, and VCR -- why not have one for all, just like at home? They could control everything with it, making life a lot easier.

With these handy items, your students can talk to kids across the world -- and they're cheap and easy to install. 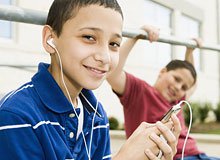 It's no surprise that this technological marvel was mentioned, as the pervasive use of white ear buds will tell you. "Let's use it in class to allow us to concentrate during tests as well as during study time," one student says. Another adds, "I find that it helps me study more effectively during time at home by blocking out distractions, and it actually improves my focus and I do a better job."

Other ideas include using an iPod to listen to books, instead of reading them (a different learning experience entirely), or catching up on the world of podcasts.

The range of artificial environments -- from SimCity games to Second Life and beyond -- boggles the mind and provides myriad possibilities for social interaction and group learning. But just remember: The real world is always more interesting than any computer-generated environment, so make time to go outside and play.

Math Blaster -- Great for students who often struggle with basic math facts, skills, and concepts. With this game by Knowledge Adventure, it's easy to practice math in an interactive and engaging way.

Command & Conquer: Generals Zero Hour -- Square off against the world's most elite commanders for battlefield domination with this game from Electronic Arts.

Imperial Glory -- An epic game from Eidos, set in Europe during the Napoleonic age. Think of it as Risk for the PC-addicted set.

Making History: The Calm & the Storm -- This World War II strategy game from the Learning Company teaches the interlocking economic, military, and diplomatic systems that cause, sustain, and ultimately resolve armed conflict.

Sid Meier's Civilization -- The objective: Build an empire that will stand the test of time. The game, from Firaxis Games, begins in 4000 BC, and the players attempt to expand and develop their empires through the ages.

Comic Life -- Sometimes your life seems comical; now, you can make it into a comic with this creative new tool from plasq.com for presenting digital photos. Create not only comics but also family albums, story books, and how-to guides.

Lineform -- A low-cost alternative to Illustrator, this innovative drawing program from Freeverse allows students to create everything from posters to DVD covers to scientific diagrams.

Manga Studio -- Create your own manga and comics, from initial storyboard concept to finished artwork, with this tool from eFrontier.

Dance Dance Revolution -- The foot-stomping arcade phenom from Konami would make a great addition to the typical PE lineup of bedraggled runs around the schoolyard blacktop, half-hearted push-ups, and free-for-all football scrimmages. "A lot more of us would be more interested in PE if this was thrown in periodically as an option for student exercise," one student says.

Zoo Tycoon -- Assign teams of kids to create zoos, and analyze the ones that score the highest on factors such as finances, animal happiness, and the number of visitors. Then figure out the best parts of how those teams managed their zoos, and try to put together the ideal zoo. This Microsoft game's action is a lot like managing a business, or even a life.

Glossopedia -- This free multimedia, interactive environmental science encyclopedia from Globio is designed specifically for children ages 7-12. And here's a nice part: no ads.