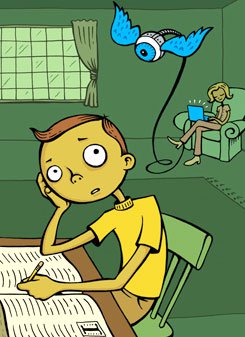 When Candi Bashiri's son walks through the door after school, she doesn't have to ask if he has any homework. She already knows. That's because in 2007, Dougherty Valley High School, in San Ramon, California, piloted a program called School Loop, essentially putting grade books, attendance sheets, student binders, and even blackboards online.

With a few mouse clicks on her computer at work, Bashiri can check her high schooler's assignments and test scores -- and see in nearly real time if he has skipped class or missed a deadline. In the information war frequently waged between parents and teens, technology has awarded her an overwhelming advantage.

With School Loop, parents, teachers, administrators, and students can access a vast quantity of data as effortlessly as opening an email. The San Ramon Valley Unified School District is now making the system available to the roughly 14,000 students in twelve schools at a cost of around $60,000 a year.

School districts across the country are adopting School Loop and similar systems, such as Edline and PowerSchool. Ed Zaiontz, chair-elect of the Consortium for School Networking and executive director of information services at the Round Rock Independent School District, encompassing parts of Austin, as well as Cedar Park and Round Rock, Texas, says that the trend toward shuttling information between schools, homes, and district offices will continue to grow as the digital divide shrinks. Even if parents don't have the Internet at home, it's likely they can go online at work, Zaiontz says. Some districts also offer computer stations for parents to use.

One might expect that the current crop of high school students -- kids who learned to read even as they learned to click a mouse and hit Enter -- wouldn't think twice about keeping track of their classes online. But the experience at San Ramon's California High School suggests that not everyone in the wired generation is an eager early adopter.

Samara Al-Jumaily, a senior at California, says that when the school first started using School Loop in 2007, about half of her classmates groused about the new window parents would have on their school days. A fan of School Loop, Al-Jumaily says she is also weary of hearing teachers complain about keeping their records up to date on the system. "I don't understand why everyone hates it so much," she says. "Everything you need is on there."

The real success of such products rests with the teachers. If they don't update the system at the back end with grades and assignments, the whole exercise becomes pointless. And there is a measure of ambivalence among teachers about Web-based technologies that dissolve traditional boundaries between the living room and the classroom.

Bonnie Meyers has a unique perspective on student-information systems -- that of a teacher and a parent. She teaches history and English to sixth graders at the district's Diablo Vista Middle School, and her daughters go to California. She says she sees the undeniable merit of School Loop when it's used properly, but there are times when it's misused, or not used often enough. Diablo Vista's principal expects that teachers will update student and class information in the system about once a week, says Meyers.

But at other schools in the district, that may not be happening. "If a teacher updates only every three weeks, it's supposed to be keeping parents in the loop, but it's doing the opposite," says Meyers, who updates her information at least weekly.

Parents, too, need to use their newfound power wisely, as Bashiri discovered. When her son got a bad grade on one assignment, she came down so hard on him that she realized she was losing perspective. "Parents have to learn how to moderate reactions and not freak out when they see a missed assignment or a bad grade," she says. As a service to the rest of the district, Bashiri wrote a manual called A Parent's Guide to School Loop, which among other practical advice cautions parents to "refrain from using the information to apply additional pressure and stress on our students." Instead, Bashiri says, parents can use the information to help their students plan ahead and manage their time.

Now, when her son gives her a noncommittal answer about an upcoming test or a grade in a particular class, she always says the same thing: "Dude, you know I've got School Loop."

Alex Gronke is a former special education teacher and a reporter in Oakland, California.