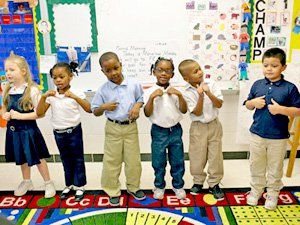 Anchorage School District developed and approved comprehensive SEL standards and benchmarks (PDF) for every grade in August 2006. The following are different voices from the district.

Carol Comeau is the superintendent of the Anchorage School District.

Why is SEL important in Anchorage?

"Alaska, unfortunately, has the highest rate of domestic violence and sexual and child abuse per capita in the nation, and so a lot of our kids, they're watching violence in their homes. Sometimes they're the ones being attacked and abused. So to expect them to be able to come into school, which is frankly for many of them their safe haven, and to automatically switch that off and say, 'Oh yes, I'm going to really focus on algebra' -- that isn't even realistic. We've got a lot of young people in very great distress."

How does SEL affect what happens in your class?

"Every teacher out there has probably said at some point in time, 'Turn to your neighbor and talk about this idea,' or 'Look at your teammates and talk about this idea.' And really watch; if they are talking about the topic that you've asked them to talk about, if they're actually listening to each other and using that language and those social skills, then all of a sudden you have an environment in which 30 kids are learning at the same time."

How has SEL changed your students?

"One of the students wrote about a class partner that he interviewed because this other student's parent was a drug addict and actually caused a great deal of turmoil in the family. His partner was someone the student had sort of looked down on before. At the end of the project, he wrote, 'I have a great deal of respect for what this student has been through.'"

"I just think that you need to be in touch with their feelings, their emotions. When I know what's going on and I acknowledge that and we deal with it then we can get on to the job of learning."

A Student at East High School in Anchorage
How has the SEL program changed your experience as a student?

Watch an Edutopia.org video about social and emotional learning in the Anchorage School District.

Dr. Sheldon Berman is currently serving as the superintendent of the Eugene School District 4J in Oregon and just received an award for Lifetime Achievement in Character Education from the Character Education Partnership (CEP). Prior to that, he was superintendent of the Jefferson County Public Schools in Louisville, Kentucky, where he implemented a district-wide social emotional initiative called CARE for Kids. Dr. Berman was also a founding member of Educators for Social Responsibility.

"I have a very deep belief now that students do not do well academically unless they feel cared about, that they’re included, and that there’s a climate around them where they can take risks. When you create that kind of safe place, students are better able to learn. They’re better able to work with peers. They’re more comfortable in the classroom. There is a process where we can consciously create, both through curriculum and through the way we structure our classrooms, a place that enables students to feel that sense of community."

"I would say that it’s essential for higher quality results academically. It’s not that you don’t have to do the academic work then. But frankly, the academic work is made easier once you do this. 62% of our population is on free and reduced lunch. We have a high level of poverty in the community. We have a lot of students who come from single parent families or non-parent families. There are a lot of issues at schools where students do their best but still have home environments that make it very difficult for them to be successful in school. And that doesn’t mean we give up on academics or we give up on the social skill development. We have to do both rigorously."

Watch the full interview with Dr. Sheldon Berman or explore an Edutopia.org Schools that Work package about Louisville's CARE for Kids initiative.

Elias is a psychology professor at Rutgers University and director of the Rutgers Social-Emotional Learning Lab and the Developing Safe and Civil Schools Initiative. He is the author of numerous studies on SEL and a regular blogger on Edutopia.

"Think of the students you've had that you've been the most proud of, that have been the best success stories. When you think about that you'll realize that those are the students who have the most positive social-emotional and character development in their lives."

"The one thing that we don't want to do is turn out very smart kids with very poor character, because they are very dangerous."

Watch an Edutopia.org interview with Maurice Elias or read his blog on Edutopia.org for practical advice on SEL into the classroom.

Daniel Goleman is an internationally known psychologist and science journalist, and the author of the 1995 best-seller, Emotional Intelligence. He was also one of the co-founders of CASEL, the Collaborative for Academic, Social, and Emotional Learning.

"(Studies show that) if kids get training in social and emotional learning, all pro-social behaviors -- things like attendance, behaving well in class, liking school -- they all go up about nine or ten percentile points. And the things that they’re trying to prevent -- drug use, violence in schools, bullying -- all of that goes down by the same margin. And the real kicker is that academic achievement goes up eleven percentile points. If you look at the difference between groups of kids who don’t do well, and groups who do, the difference in their achievement is in about the same range. So this pretty much closes the achievement gap, and it works best for the kids who need it the most. So today, I think the social and emotional learning movement has the ammunition to go to the next level, really to take it to scale, to make it available to every kid, everywhere in the country."

"I think to get this kind of education for every kid, we have to first get over our fixation on academic achievement tests as the end-all and be-all of education. We have to remember we're educating the whole child. And if you talk to people in companies, as I often do, you find that they don't just want bright kids with technical skills; they want bright kids with technical skills who know how to get along, who can cooperate, who can be good team members, who can relate well to customers, who manage their emotions well, who stay motivated, who take initiative. Those are social and emotional skills. So what makes kids prepared for the workplace? Yes, it’s the academics, but it’s this, too, and I think that we need to get over the mindset that sees this as something extra or something unnecessary."

Watch the full Edutopia.org interview with Daniel Goleman, a video from a 2008 panel of Goleman and other national experts discussing SEL, or read a 2001 Edutopia.org article by Goleman where he takes a look at how SEL had grown since the publication of his book in 1995, Emotional Intelligence: Five Years Later.

Linda Lantieri is a Fulbright scholar, cofounder of the Resolving Conflict Creatively Program, and director of the Inner Resilience Program. She has been a classroom teacher, middle school director, and on the faculty of Hunter College in New York City. She is also a founding board member of CASEL. These comments are excerpted from her 2009 article, "Cultivating Emotional Intelligence Through Social and Emotional Learning." (PDF)

"Children growing up today will not just inherit the world's problems. They will be expected to have the skills and the will to help solve them. How will they be prepared to cope successfully with their daily lives and lead us into a complex and uncertain future when a narrow, inadequate vision of education still prevails for so many of the world's children?"

"Fortunately, there is evidence of a sea change in education worldwide, a new way of thinking about what it means to be not only an educated person but a 'smart person,' someone prepared to be an engaged world citizen, a productive worker, and a caring and compassionate friend and family member. The concept of emotional intelligence is making its way into the world's consciousness, and a whole new way of thinking about education has emerged."

Watch an Edutopia.org video about the Resolving Conflict Creatively Program or read Edutopia.org articles by Linda Lantieri, "Stilling the Mind" or "A View on Emotional Intelligence in Everyday Life."

Deborah Stipek is James Quillen Dean and a professor of education at the Stanford University School of Education where she studies the impact of different instructional approaches on children's motivation to learn, preschool and elementary education, and school reform. Her comments are from a November 2010 forum marking the 10th anniversary of her groundbreaking book, From Neurons to Neighborhoods.

"Children's 'executive' skills, such as the ability to control impulses and focusing, predict both social and academic skills. Executive functions are shared in both domains."

"In social interactions, children need to remember and follow the rules of the game. They need to be able to inhibit the impulse to push a child out of the way when they run for a ball or to grab a toy they want rather than ask for it, and they need to plan strategies for entering play or engaging other kids in play."

"In academic work, they need to remember the instructions and pay attention to the task at hand despite the distractions around them."

Weissberg is president and CEO of CASEL, the Collaborative for Academic, Social, and Emotional Learning. He is also the Endowed Chair in Social and Emotional Learning at the NoVo Foundation and is the Liberal Arts and Sciences Distinguished Professor of Psychology at the University of Illinois at Chicago.

"We want to provide kids with the best possible education so that they are knowledgeable, responsible, caring people who contribute and who are going to succeed in postsecondary education and in careers and as good community and family members. I think there's a growing research base that says when you have high-quality social and emotional learning programs, it improves kids' pro-social behavior; it reduces their conduct problems; and it promotes academic engagement, connection to teachers, and academic performance."

Organizations and Resources that Support and Promote Social and Emotional Learning