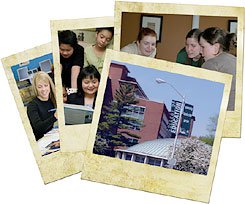 Michigan StateUniversity, the seat of early calls for reform in teachereducation, remains a leader in improving the preparationof educators.

Its five-year program, launched in the early 1990s, includes a bachelor's degree and a postbaccalaureate internship and ensures that students who want to teach are shortchanged on neither a liberal education nor hands-on teaching practice. Other MSU innovations are new and evolving, proving that self-improvement must be ongoing.

"It's a very ambitious place," says SuzanneWilson, chair of the Department of TeacherEducation at the university's College of Education."You have to try things, find out what doesn't work,and then figure out the next step."

Students take only five education classes as undergraduates,focusing mainly on general subjects.To give candidates a context for their studies, however,each education course entails twenty to thirtyhours of fieldwork. Throughout the fifth year, everycandidate serves as an intern in a school, graduallyworking up to lead teaching and then returning tothe university to debrief and study further.

"The internship year helps us workwith students about things that youwouldn't see in a four-year program,"Wilson says. "It's a hard first couple of yearsin teaching, and we're with them when otherteacher-education programs are not."

Today's innovationsin the makinginclude a three-yearinductionprogram forgraduates, supportedbya Teachersfor a NewEra grant from the Carnegie Corporation ofNew York and the Ford and Annenberg foundations.Through the pilot program, now in its thirdyear, carefully selected and trained mentors meetweekly with groups of new teachers in the Lansingschools. Mentors are released from teaching one day aweek, when they observe their charges.

"It's way different from models where the mentorjust pats you on the back or is there for you oncein a while after school," says program directorRandi Stanulis.

MSU is also developing a program tailoredto candidates with a passion for urban teaching,as well as scholarships for Detroit highschool students who pledge to teach for atleast three years in city settings. Enrollmentin the Urban Educators Cohort Programjumped from thirty-eight in its first year (last year)to fifty-four this fall. "I think we're onto something,"says Wilson.

Naturally, faculty are busily examininghow well these inventionswork and how to make them better.This is just a beginning.