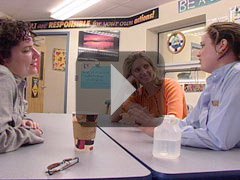 In a rural elementary school not far from Thomas Jefferson's homestead, a University of Virginia sophomore pays close attention as a veteran teacher helps a kindergartner sound out letters. In a suburban Colorado high school, a former chemical engineer in a career-switchers' program tests her fledging teaching skills using a card game about the periodic table. And in an inner city San Francisco elementary school, San Francisco State University graduate students practice-teach at the same place they take their education courses -- a professional development school that is run jointly by university teacher-educators and the school district.

Because of the rigor and practicality of the programs, these novice teachers are much less likely to be among the 30 percent of new teachers (the figure is higher in urban areas and some states) who leave the profession within the first five years, often because they lack the right kind of preparation. And in an era when schools across the nation need to hire more than 200,000 teachers annually -- not all of them newly trained, however -- preparation that will keep teachers in their jobs is crucial.

"Teacher preparation makes a difference in both teachers' effectiveness and their likelihood of remaining in the profession," says Stanford University Professor Linda Darling-Hammond, executive director of the National Commission on Teaching and America's Future.

And because individual teachers have such a significant impact on student performance, high-quality teacher preparation is all the more important. "Growing evidence indicates that teacher quality is one of the most powerful influences on student achievement, "points out Darling-Hammond, "more powerful than almost any other school resource and as influential as student background factors like poverty, language, or family status."

The Curry School of Education at the University of Virginia is among those that incorporated generous classroom experience when it overhauled its teacher education program in the 1980s. Even though the university offers no undergraduate education major, students start as early as their sophomore year tying education theory to real classroom experience under the watchful eyes of both university professors and classroom teachers. At the same time, the future teachers earn their undergraduate degrees in an academic subject. Half of the fifth year of the program is devoted to a semester internship. The other half requires an in-depth analysis of an educational issue encountered by the student during the internship.

Making the Most of Technology

Curry also has been a leader in making the most of what technology has to offer. Curry students use the Web as a source for research, learn how to make their own Web pages, and master the use of such devices as inexpensive microscopes that link to computers for enhancing science instruction. Curry's CaseNEX -- multimedia case studies of classroom issues -- gives prospective teachers a no-risk opportunity to try out solutions to school problems before they ever set foot in a K-12 classroom. Videoconferencing brings in students, teachers, and professors from other areas whose points of view add new and challenging dimensions to Curry discussions. Curry students also develop their own Web-based portfolios.

In the wake of academic reports and research on teacher preparation reform, a number of colleges and universities have revamped their education schools from the bottom up: Northeastern University in Boston changed its structure to emphasize content knowledge by inviting faculty members from the College of Arts and Sciences to run the education school. A number of higher education institutions -- the University of Cincinnati, Trinity University in San Antonio, Texas, and the University of Southern Maine, among others -- created professional development schools, where fifth-year students, including individuals starting a second career, combine teaching responsibilities with participation in education seminars overseen by both university faculty and school-based teachers.

Teachers and students in Gen www.Y programs work together to include technology in lessons.

Schools and Universities as Partners

The professional development school program at John Muir Elementary School in San Francisco lives the belief that teacher education should be a genuine partnership between the theorists and the practitioners. The school, which also boasts a state-of-the-art technology lab, until recently had two principals: Cecilia Wambach, an education professor from the university, and Virginia Watkins, an administrator employed by the San Francisco Unified School District. Wambach recently returned to the university to share the expertise she gained at the school with her College of Education colleagues. Pat Chandler, a lecturer from the university, now directs the program -- Muir Alternative Teacher Education (MATE) -- at the school site, and Watkins is the sole principal.

Colorado State University has been lauded for its innovative teacher preparation program aimed at career switchers. Teacher candidates in the Project Promise program receive instruction focused on a particular target population and then do practice-teaching at a school that reflects that population, such as urban high school students or non-English speakers. By the end of the ten-month program, the students, who come from jobs as diverse as engineering and meat-cutting, have taught in four or five different settings. Students are required to demonstrate proficiency through performance at each setting. Once the candidates have graduated, they continue to receive strong mentoring in their first and second years of teaching.

Teachers-to-be also are getting a boost from a hitherto untapped source: kids. A program called Generation www.Y is helping teachers raise their high-tech IQ. At Evergreen State College in Olympia, Washington, for example, elementary students in the Generation www.Y program have taken on the role of teacher to their elders and are transforming future teachers from techno-neophytes to Web, PowerPoint®, and software virtuosos.

Both Darling-Hammond and Arthur Wise, president of the National Council for Accreditation of Teacher Education (NCATE), liken the current state of teacher preparation to the state of medical education at the turn of the twentieth century, when a doctor could hang out a shingle with just a three-week course in diseases and their cures. Licensing standards were "weak to nonexistent," says Darling-Hammond, pay was paltry, medical education was outmoded and superficial, and medicine was nowhere close to the revered profession it is today.

But an eye-opening 1910 study commissioned by the Carnegie Foundation known as the Flexner report revealed the inadequacies of medical training provided by medical diploma mills. The report called for widespread reform, which was heeded by universities, accrediting agencies, doctors themselves, and other institutions. That reform movement led to the rigorous standards, preparation, and mentored practice that exist today for aspiring doctors.

"When medicine was organized and when physicians became active at the state level and began to insist that doctors be graduates of nationally accredited medical schools, things started to change," Wise says.

A similar movement in teacher education is taking place now, and a number of education schools have embraced the more stringent accreditation standards set by NCATE. There is still a ways to go, Wise says, predicting it will take another ten or twelve years for teaching to gain the professionalism that characterizes medicine and law.

But, he adds, "a new day is dawning on our colleges of education ... [that is] unprecedented in my lifetime."