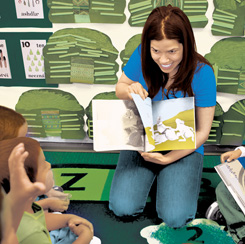 America Ferrera, the 25-year-old star of the hit TV series Ugly Betty, didn't get the memo. Glamorous, talented, Emmy-winning young Hollywood stars are supposed to spend their 20s, and perhaps 30s and 40s, veering between indolence and debauchery. Only in their silver years are they expected to dip their toes respectably in a fashionable charity, usually while the cameras roll. But Ferrera had other ideas.

For the last two years, the daughter of Honduran immigrants has served as Save the Children's artist ambassador for education, working with the international organization to improve the lives of children in need around the world. This is no phone-it-in position. The actress spent much of this past Christmas holiday in Mali, part of an effort to build a school for a small community. "As the youngest of six kids with a single mother, I was taught that school and education were our way out," she says. Ferrera recently reflected on her experiences with Save the Children as well as her own education.

What kind of student were you?

I was a very serious student. Everything I did in high school was aimed toward getting into a good college. And even though I loved my drama classes, I would opt out of school plays to take extra night courses that would boost my GPA.

What are some high points from your school career?

The first time I truly loved school was when I started college. Everything up to that point was about looking good on paper and getting into a great university. Once I was actually in college, I realized that school was about bettering myself, not competing for some kind of prize. At USC, I got to choose what I wanted to focus on, and I knew that the only person who had anything to gain from me studying hard was me. I really embraced the classes that challenged my worldview, and I was continually shocked that there was so much about the bigger world that I had never been exposed to.

How is school different for a first-generation American than for someone with deeper roots here?

I can't speak for all first-generation Americans, but in my family, education was extremely important. It was ingrained in me that education was the only true safety net I could ever have. I didn't take it for granted.

What have you learned as the Save the Children artist ambassador?

You've said acting is a way to uncover self-truths. Do you remember school helping you discover anything similar?

When I first started studying international relations at USC, I was so horrified by how little I knew about life outside of the U.S. I felt ashamed and ignorant, and even a little wronged. I was upset that there was so much my grade school education hadn't taught me. I guess I always imagined that if there was something worth knowing, then an adult would put it on the syllabus. Through this experience, I learned that I had to motivate my own quest for knowledge even without the incentive of a grade -- even beyond the confines of a classroom.

Who was your favorite teacher, and why?

I've had so many influential teachers. But one who stands out is Mr. Johnson, my tenth-grade history teacher. Until that point, I had convinced myself that I hated history and that it was completely irrelevant in my life. Mr. Johnson was the first teacher who made history feel exciting and relevant to me. He sparked a desire to learn about the greater world, which led me to study international relations in college.