Editor's Note: Joel Kirsch, age 62, is two weeks into an arduous journey, half of it on his hands and knees, that could last four to six weeks more -- all in the name of better education. Kirsch is a former sports psychologist for the San Francisco Giants and president of the Northern California-based American Sports Institute, a nonprofit educational organization that applies the principles and practices of sport culture and wellness to other kinds of challenges. He has previously contributed to Edutopia in words and video.

Kirsch and the Institute are working to create the Arete School of Sport Culture and Wellness, a tuition-free, privately funded school in California that will integrate sports practices to generate high marks on academics, health, and motivation for its students, including those from disadvantaged backgrounds. It's part of Kirsch's bigger vision for how to revive American education. And now he's traveling the length of a county, one push-up at a time, to make his point.

Why am I doing this? It's so grueling. Six hours a day, five days a week, for as long as it takes. Right now, as you read this, I'm probably on the Highway 101 frontage road in Marin County, California. I'm traveling (more like inching my way) some 40 to 50 miles from the northern end of Marin to its southern border on the Golden Gate Bridge. Less than 100 feet to my left cars are rushing by me at 60-70 miles an hour. The noise is deafening; the fumes choking. I hate freeways. 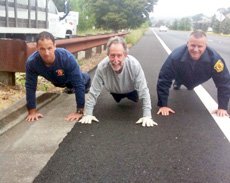 This is my mantra: Stand straight, inhale and step forward with the right foot. Exhale and go down on the left knee. The carpenter's knee guard will protect it (so far, so good). Glove-covered hands down in a push-up position, both feet straight back. I go down for a push-up, inhale-exhale. Breathing in, I step forward with the left knee, then right foot. Exhale. Stand straight. Repeat.

I tell myself: Let go of all that. You know what to do. Stay focused. Keep going.

Of course, I know why I'm doing this -- and it's working.

We had to focus a spotlight on the fact that students need to be engaged in sustained, high levels of physical activity, especially aerobic activity, in order to realize their full academic and health and fitness potential. The ancient Greeks instinctively knew this. Great figures throughout history have known it. Studies over the past quarter century have proven it. Recent and emerging research in neuroscience is validating it and explaining in detail how it happens. The Arete School is going to incorporate all of this.

This is the Arete School Pilgrimage, a journey in prostration push-ups. We've gotten a bunch of publicity on it, which will raise the visibility of our message and our efforts to create the school. It's all going to be worth it.

The bottom line is: Engaging in high levels of physical activity increases academic achievement; maximizes health and fitness; improves attitude, behavior, and mood; promotes longevity; reduces medical-care costs; and helps you get a good night's sleep without taking a pill. What educator wouldn't want all this for his or her students and their families? However, despite these irrefutable truths, the physical domain has been given either only passing interest or has been left out of the discussion entirely in the half-century old, educational-change movement. Paradigms and perspectives are difficult to change.

What's been so uplifting doing the pilgrimage has been the support from those I know and from strangers who have read the articles and seen the television stories. My dentist has come out twice, several hours each time, to do the pilgrimage with me. There were the Novato firefighters who came out of their station to do prostration push-ups with me. And Maria Lashinger, a graduate student in sports management at the University of San Francisco, has been with me most of the way as a support person.

I've learned that when you're really willing to put yourself on the line for a worthy cause, it brings out the best in others. There was the woman who had a front tooth missing, someone who seemed to be struggling to hold her life together. She said she read the front-page article in the Marin Independent Journal, the county newspaper. When she saw me doing the pilgrimage on the sun-baked sidewalk, she said, "Good for you and what you're doing for the kids." I responded, "You just made my day."

There was the dad who had seen the article and came out of his office as I prostrated and pushed-up by, to tell me about his high-school swimmer son who had heart surgery as a young boy, and again about a year ago. He told me how important physical activity has been to his son, just to keep him here on the planet.

Then there was the elementary-school teacher in her car who pulled up alongside me and said she had put the IJ article on her refrigerator so her seven-year-old daughter could see it. Mom wants her daughter to be more physically active, to get outside more and enjoy life, to be better prepared for school. Then she drove off, only to show up a few minutes later with an ice-cold bottle of water.

So many people have told me that they've never felt more human than when they're physically engaged. Whether it's being able to do better in school, more focused and energized at work, feeling good about and within yourself, and being able to get along better with others, those who are physically active know what the ancient Greeks knew.

If you are so inclined, I'd love to hear from you about all this. What's your take on the role of physical activity in your life, and for our kids in America's schools?

I believe that the degree to which a society or an institution values the mind over the body or spirit is the degree to which that society/institution is in a state of dis-ease. Given what the research is trying to tell us, what's going on in our troubled public-school system and America at large is not a problem but the symptom of a problem.

The real problem is that, as a nation, we continue to deny the fundamental role of the physical in the education of the whole child in our public schools and in our daily lives. While well-intentioned, our schools are not allowing our children to realize their full potential. Is it any wonder why the children cry out to us through their chronic disengagement, underachievement, attitude and behavior issues, and poor health? The very essence of our humanity is crying out to us through our children.

The full integration of the physical domain into the total learning experience of every child may be the essential element that has been missing in the half-century effort to turn around America's public-school system.

Half a century is long enough. We can do this.

Now, where was I? Oh yeah, inhale and step forward with the right foot. Exhale and go down on the left knee . . .