Credit: Klaus Schonewiese
All on the Same Page: 'If it's good for my kid, it's good for everyone,' says Sonja Bingham (right) of the changes she helped bring to Philadelphia's General George A. McCall Elementary School with fellow parent Keri White (left) and principal Carol Domb (center). 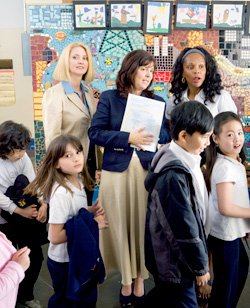 Credit: Klaus Schonewiese
All on the Same Page: 'If it's good for my kid, it's good for everyone,' says Sonja Bingham (right) of the changes she helped bring to Philadelphia's General George A. McCall Elementary School with fellow parent Keri White (left) and principal Carol Domb (center).

Looking for a silver lining to the bad economic news? More private school parents could be on their way to public schools -- and that could be great news for public education. "More private school parents are coming in for information and tours," says Martine Guerrier, chief family-engagement officer for the New York City Department of Education. "We'd love to have them."

That's not because these families are preferable, of course, but simply because in the past, converted private school parents, unlike some of their wage-earning counterparts who are often tied to inflexible or long working hours, have had the free time and financial resources to fight hard for their own kids -- and, by extension, for every student. It's too early to say how many of these traditionally private school parents will make the switch or choose public schools from the start, but many administrators hope they go public.

Take Sonja Bingham. In 2004, as many of her friends in Philadelphia's tony Society Hill neighborhood were sending their kids to private schools, Bingham enrolled her son in kindergarten at the neighborhood public school, General George A. McCall Elementary School. Political ideals didn't drive her decision as much as simple economics.

"Private school was too expensive," says Bingham, a full-time mother whose husband is a music producer. "If we had spent that money for tuition, I would have had to get a job, and that's not the way we wanted to raise our family."

The Model of McCall

McCall was already a racially diverse school with some economic integration. Located in downtown Philadelphia, it serves the renovated 18th-century and 19th-century townhouses of Society Hill as well as the city's Chinatown. The student population is about 55 percent Asian, 27 percent African American, 11 percent white, 1.7 percent Latino, and 4 percent other.

When Bingham's son first enrolled, McCall already had a fairly good reputation for academic rigor and safety compared with other Philadelphia city schools. ("I would never have done it otherwise," Bingham says.) But as Bingham saw it, there was plenty of room for improvement. For starters, the library was "a dirty, gray place, full of way-out-of-date books with titles like Negroes in Baseball," recalls Bingham, who is African American. "I was like, 'This has to go.'"

Bingham quickly hooked up with a small group of McCall parents. One mother, Keri White, then an etiquette columnist for the Philadelphia Inquirer, had connections to a powerful neighborhood charity, the Society Hill Civic Association. She convinced the group to help with a gala for McCall that eventually raised $55,000 from both individual and corporate sponsors. The school used the money to build a state-of-the-art, high tech "cybrary."

The two parents didn't stop there. They took on leadership roles in McCall's Home and School Association (the Philadelphia equivalent of the PTA) and successfully pressured the school district to remove the principal. More fundraisers followed, and the money was used to buy interactive whiteboards for every classroom for grades K-5.

"It's not that we cared more about McCall than other parents did," Bingham says, "but we had the resources to make things happen."

Bingham and White earned the attention of the School District of Philadelphia's then CEO, Paul Vallas. Feeling the momentum, he channeled district money to McCall for a much needed playground.

"I wished I could have cloned Sonja and Keri," recalls Vallas, now superintendent of the Louisiana Recovery School District. "These were affluent women tired of economic and racial segregation. They didn't want their kids in a homogenized private school. So they worked together -- a black woman and a white woman -- to make their neighborhood school a quality place."

"They improved the school climate and made it more academically rigorous," he adds. "These improvements were good for everybody, including those who didn't have the option to send their kids anywhere else."

Credit: Klaus Schonewiese
'If we had spent that money for tuition, I would have had to get a job, and that's not the way we wanted to raise our family.' -- Sonya Bingham, McCall parent 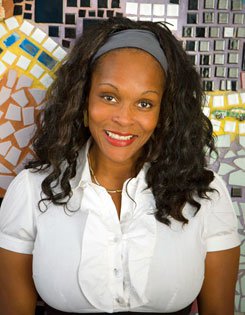 Credit: Klaus Schonewiese
'If we had spent that money for tuition, I would have had to get a job, and that's not the way we wanted to raise our family.' -- Sonya Bingham, McCall parent

Though parents from any income level can contribute to a school's quality, statistically speaking, having more upper-income and middle-income parents pushes schools' achievement levels. The importance of parental involvement in building great schools is well established, according to reformers like Richard Kahlenberg, a senior fellow at the Century Foundation, a progressive think tank in Washington, DC, who says the degree of involvement "tends to track pretty closely to income levels."

Affluent parents are also "more likely to know how to hold school officials accountable," Kahlenberg says. "They're more likely to have disposable income they can spend on the school and more free time they can devote to it."

That's certainly the case with Keri White. "Since my husband and I were saving $22,000 a year in private-school tuition," she says, "we were more than happy to give McCall a $2,000 check here or there."

Having more students from middle-class and upper-class families almost always translates to better test scores for everybody. According to a 2002 study of children in Dane County, Wisconsin, by urban-policy consultant David Rusk, low-income children at schools with a middle-class majority scored 20-32 percent higher on standardized tests compared with what their scores would be at schools with a lower percentage of middle-class students.

This finding has led some to dream about economically integrating every urban public school with "a strong core of middle-class students," as Kahlenberg puts it. (By "middle class," he means any family that doesn't qualify for a subsidized school lunch. For the current school year, in a family of four, that's an annual income of no more than $39,200 to qualify for a reduced-price meal and a maximum income of $27,560 to qualify for a free meal.)

There's more than one way to spread the wealth. In North Carolina, in the mid-1970s, Raleigh and suburban Wake County were combined into one district, which changed the real estate picture (all homes were now in the same district) and helped improve the area's unified school system.

Then, in 2000, officials redrew the school boundaries within the district so that children from low-income urban areas would go to school with those from the higher income suburban areas -- all with the goal of reducing every school's population of poor students to 40 percent.

In Cambridge, Massachusetts, the district has encouraged economic integration with its controlled-choice program. The initial result brought about a better racial balance. Later, as the program was amended, more affluent families were enticed to poorer schools via the broader educational options offered.

The idea behind the program was to bring middle-class whites back to public schools and, by eliminating neighborhood zones, to give every child a chance to attend any school. One popular school, the John M. Tobin School, uses the Montessori model and attracts middle-class families who like the philosophy but don't want to pay private-school tuition.

Administrators often try to identify this sort of carrot to entice middle-class parents into schools where they can help even out the socioeconomic mix. Sometimes an unusual program like Montessori does the trick, while other parents need assurances about academic rigor and safety. When it comes down to it -- whether they admit it or not -- many parents want to make sure their kids will be surrounded by other children who are "like" them.

That goal can be tricky, because each school needs pioneers to take the first plunge. Still, says Sonja Bingham, "it only takes a couple. After a few parents take a chance, more families feel comfortable sending their own kids."

Although specific numbers aren't available, it's clear that Bingham and White helped draw more affluent Society Hill families to McCall. Those families, in turn, have brought in more families. "It happens by word of mouth," says McCall's principal, Carol Domb. "When parents have a positive experience, they tell their friends. They put the word out in the preschools."

Marketing to parents is a big part of economic integration, and some administrators encourage the effort. In the more affluent northwest Philadelphia neighborhood of West Mt. Airy, Kimberly Newman, principal of Henry H. Houston Elementary School, started a prekindergarten program this year to provide a neighborhood school to serve young families.

Now that parents see the school in operation, instead of turning to private schools, "they're committed and they're staying," she says. Hooking them in, as Houston has done, is a technique the private schools themselves often consciously employ, and public schools can do it, too.

Back in 2002, even before Bingham and White got going, a Mt. Airy father named Kevin Peters started a group to attract other neighborhood parents to the local grade school, C. W. Henry Elementary School. He hosts recruitment meetings in his home, writes a blog called Knowing Henry, and arranges school tours.

"The first challenge is getting parents into the school," Peter says. "So many of them think they know what the Philadelphia public schools are like. It's all, 'underfunded,' 'guns,' 'ceilings falling down.' But once we get them inside, they realize Henry isn't like that." In the past seven years, Peter says he has helped convince 90 families considering private schools to choose Henry, with 12 children enrolled this fall.

In the end, however, a troubled economy may be the best recruitment tool. "It's an excellent opportunity," Peter says. "Financial concerns will convince people to take a chance. If they put just some of that private tuition money into their neighborhood public schools, these places could go from good to great."

Go to "How to Market Your School to Other Parents."