Several years ago, using a diverse northeastern middle school as their laboratory, researchers from Yale University set out to test a simple solution to an excruciatingly complex problem: the racial achievement gap. Believing that the disparity in academic performance between white and African American students is partly fueled by a psychological effect called stereotype threat, they proposed to narrow the gap using a simple fifteen-minute writing exercise. 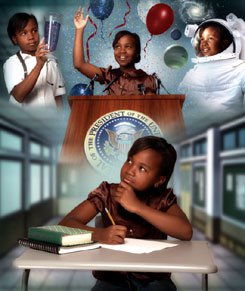 It was a "test of faith," recalls lead researcher Geoffrey Cohen, an associate professor of psychology who now works at the University of Colorado. In the end, even the faithful were surprised by what they found.

The team had chosen a middle school attended by about even numbers of African American and white students, mostly from middle or lower middle class families. Cohen, who published the study in Science last fall with Julio Garcia, Nancy Apfel, and Allison Master, explains that this school already had positive forces in play -- sufficient resources, devoted staff, academically prepared students -- but something else, something invisible, was blocking African American students from fully exploiting those benefits. That invisible obstacle, speculated researchers, was stereotype threat.

Based on a theory developed by Claude Steele, Lucy Stern Professor of Psychology at Stanford University, and supported by numerous scientific studies, stereotype threat works like this: A member of a stereotyped group -- say, a woman playing baseball -- knows of a stereotypical belief that she's likely to "throw like a girl." As she winds up, somewhere just below her consciousness lurks the nagging fear that if she tosses a blooper, other people will chalk it up to her gender. That anxiety undermines her skill, and she does just what she doesn't want to do: She lobs a weak, "girly" throw.

Steele and others say a similar pressure compromises the performance of African American and other minority students in diverse classrooms, where the presence of their white peers constantly reminds them that they are commonly thought to do worse in school.

"What people may not understand is that, on a chronic basis, the minority kids in those classrooms are under the pressure of stereotypes," says Steele. "You're in a situation where any frustration you have on a daily, moment-to-moment basis could confirm this negative stereotype of you as a member of your group -- like a woman in an advanced math class, any time you raise your hand, there's the apprehension that you're going to confirm what everybody thinks about women. For other kids, they will have anxieties, but not that extra one."

For the experiment, the researchers asked teachers to assign a short, in-class essay early in the fall term. Half of the kids, chosen at random, were asked to choose from a list of attributes ones they value, such as relationships with friends or being good at art, and write about them. The other half received instructions to select things on the list that matter least to them and write about why they might be important to someone else.

Lead researcher Geoffrey Cohen and his colleagues had designed the first prompt to affirm what they call students' self-integrity, or sense of worth; the latter prompt was meant to provide a neutral comparison. They believed -- or at least hoped -- that the affirmation likely to come from writing about what is important to them would help African American kids counter the fear of being stereotyped long enough to boost their grades on the next class assignment. The teachers involved didn't know which students received which writing prompt; neither students nor teachers knew the purpose of the study.

When the results came in, they were proof that the researchers' goal to improve performance on a single assignment was too modest; the effects of the writing exercise reached far beyond that. In the class in which the exercise was given, African American students who wrote the affirming essay earned final term grades that were, on a four-point scale where A equals 4 and F equals 0, an average of 0.26 points higher than those of their classmates of the same race.

The results were so startling that the psychologists tried the experiment again the next year with a different group of students. The effect was even more powerful; this time, the affirming essay boosted African American students' final grades by an average of 0.34 points. Across all classes, the rise in the affirmed students' overall grade point averages was nearly as large. According to the researchers' calculations, the likelihood of two such outcomes happening due to chance, with no influence from the essay, is just 1 in 5,000.

The exercise benefited low- or moderate-performing African American students the most, while it had no effect on the grades of white students. Combining results from both years, the essay narrowed the achievement gap between African American and white students in that class by 40 percent. If future studies bear out similar results, says the superintendent of the district where the researchers worked, "the implications of this are pretty powerful."

Cohen emphasizes that stereotype threat is only one of many factors that accounts for the racial achievement gap. His study suggests, though, that it's one cause that could be eased with simple interventions such as the one he tested.

"What we do, it's sort of like turning on a light switch -- we enable the expression of what's already there," he says. "A light switch wouldn't work unless there was an electrical infrastructure already there. Likewise, there's a lot of positive forces whose influence is being suppressed by psychological factors in the environment, so if you can clear up those psychological factors, you can give those positive forces the opportunity to be fully felt."

One reason Cohen gives for the profound effect of his seemingly simplistic exercise is that it interrupted what would otherwise have become a downward spiral. "There seems to be this cycle that feeds off of its own consequences," he adds. "Students might start the term doing well, and then they do a little bit worse than they expect, and that undermines their sense of belonging and confidence, which in turn undermines their subsequent performance."

In fact, the in-class grades of African American kids who wrote the affirming essay had dropped until the day of the writing assignment, but then jumped upward and were sustained throughout the term. By enhancing students' feelings of personal worth, Cohen surmises, the exercise changed their perception of bias at school and shifted how they interpret their academic successes and failures -- steps that protected them from feeling discouraged and plunging further into the downward spiral. Or, as Steele puts it, the psychologists gave the African American students "an inoculation against the threat inherent in the stereotypes."

The potency of the essay also could spring from its focus on what people value -- an emphasis that can boost people's sense of self-worth and integrity, says Cohen. One student, for example, wrote about the importance of his friends, whom he knows he can count on when he's in trouble. Another wrote that he does well in school to make his parents proud.

"What seems small isn't really so small," Cohen says. "It's tapping something that's very deep and meaningful to the kids and an important part of their lives, and bringing it to the fore in this otherwise threatening situation."

Douglas Edwards, a math and engineering teacher at Atlanta's mostly African American Westlake High School, knows his students' struggles intimately and wasn't surprised at all by the results of the study. It wasn't so much the idea of stereotype threat that convinced him the study would succeed as it was the focus on things youths value.

On their own, immersed to the point of distraction in a media culture obsessed with sex and material things, teens don't tend toward discussions of values, he says. But when they're prompted to, he believes, they engage in self-reflection and "education becomes important."

Before teachers around the country start giving their students writing exercises on what they value, however, Cohen cautions that his study is only a starting point. Educators need more research to answer a host of questions: Can the boost in African American students' grades be sustained over time? Will a similar intervention help other kids at different grade levels? Would it make as much difference in a homogeneous school, such as the one where Edwards teaches, where racial stereotypes are less palpable?

Because Cohen intends to study some of these questions in the same school district where he started, the district and its superintendent featured in the study must remain anonymous so that teachers and students there stay blind to the research goals. With Cohen's study as a springboard, Steele bets that over the next twenty years, many other researchers will take up the question and deepen our understanding of how to cultivate classrooms where students of all races feel free from stereotypes.

"That is the primary American challenge," Steele adds, "to find a way of having a diverse classroom be a good place for all students."