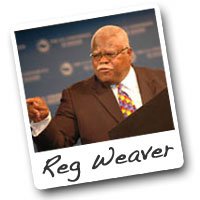 That's the National Education Association's message to the politicians reworking the No Child Left Behind Act.

The landmark law is due for reauthorization this year, and the national teachers' union has put forth a bevy of suggestions for how to make it better. At the heart of the reforms is the idea that one size does not fit all: One form of testing does not measure the skills of all students, one definition of expertise does not match the abilities of all teachers, and one prescription for improvement does not fix the problems at all schools.

In a conversation with Edutopia.org, NEA president Reg Weaver laid out the crucial ways his organization believes NCLB should change to better serve America's students. Though the law's authors were right to demand a high-quality education for every student, Weaver says, they must encourage the use of more diverse measures for success than a single pen-and-paper test. They must urge states to measure individual students' growth, instead of comparing groups of students to each other year after year.

Also, rather than slap sanctions on schools that fail to meet the standards, Congress members rewriting the law should provide them assistance to improve, he says -- and that assistance should be tailored to the particular challenges at each school, be it class size, parental involvement, professional development, or something else.

Here, Weaver makes his pitches for a new NCLB:

"There are some good components of No Child Left Behind that we think need to stay, like disaggregation of data. We do not want to throw the baby out with the bathwater."

"Testing should be a mechanism to determine student success, and not the mechanism. Right now, that is the mechanism, and everything else be darned."

"We believe there is something wrong when you have to have a special-ed student be expected to perform the same way, at the same rate, at the same time as a regular-ed student. If they could do that, the question is, 'Why are they in special ed?'"

Let Teachers Teach What They Know

"As a middle school social studies teacher, under No Child Left Behind, the only way that I would be able to teach government and history and civics is if I received additional certification. We believe that is being a little bit too inflexible."

Build Schools Up -- Don't Put Them Down

"If you want to improve what happens in schools, first, you identify the reasons for the challenges existing, and then work to see how you can provide the strategies in order to make it happen. You can move a kid to another school, but what's going to happen to the kids that remain at that school?"