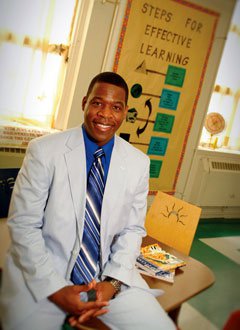 This article accompanies the feature "A Louisiana School Leader Answers the Call of Duty."

"We all speak TAPanese," says Rene Lewis-Carter, principal of the Martin Behrman Charter Academy of Creative Arts & Sciences, in New Orleans, referring to the Teacher Advancement Program. "TAP is what we do. It's not easy, but it's definitely worthwhile."

Launched in 1999 by businessman Lowell Milken, the TAP program is a demanding teacher-development model gaining momentum in school districts nationwide. The program, which reaches about 7,500 teachers in 14 states, got an influential nod from President Obama in a speech he gave about education earlier this year.

In essence, TAP provides a detailed plan for how teachers can be effective in the classroom, furnishes a formula to evaluate all teachers, and links positive evaluations along with achievement-growth measures to bonus pay. Although these bonuses get the most attention in heated performance-pay (sometimes called merit-pay) debates, the incentive is only one aspect of an exhaustive program.

The program's other basic components include

Each of the broad goals of the program is broken down into specific requirements for classroom instruction and in-school training. Teachers involved in TAP receive detailed rubrics for every aspect of the program, complete with specific descriptions of what they are accountable for in the classroom and examples of exemplary, proficient, and unsatisfactory performance.

To determine performance-based bonuses, teachers are assessed in two areas:

At Behrman, if a teacher's overall evaluation is favorable, she can receive a bonus of $150-$4,000. This award is in addition to the base salary, which starts for classroom teachers at about $42,000, according to Assistant Principal Brian Young.

"For lack of a better word, it's a godsend," says first-grade Behrman teacher Herschel Stevenson. She adds that, before TAP, the district evaluations could feel punitive. At first, she was worried TAP was just the latest fad in professional development, but she began to appreciate the specific instructions and consistent support. Classroom teachers under TAP receive guidance from master teachers who model lessons and hold weekly 90-minute professional-development sessions.

"The master teachers drive the TAP program for the school," says Young, who was a master teacher before becoming assistant principal. At Behrman, the three master teachers stay abreast of the latest research, and they monitor data to provide coaching to the classroom teachers.

"It's an adjustment," says Young. "We were trained to do things differently from the way they're done in TAP. The first reaction to professional development pre-Katrina was, 'Here we go again. Here are some new hoops that you want us to jump through, and then it will be out the window in a year or two.'"

Young recognizes that TAP requires a lot of paperwork, which can be tedious. And at first, some colleagues were wary, thinking that the master teacher's oversight role might be that of a watchful administrator rather than as a mentor.

Finally, funding for TAP can be an issue. The program costs a school about $250-$400 per student annually. State and federal funds, along with grants, often pay for the costs. For the Algiers Charter Schools Association, which formed Behrman, the implementation of TAP was supported in part by a $17.6 million federal teacher-incentive fund awarded to TAP's parent organization. In other locations, TAP may get a financial boost from money in the federal stimulus package that's designated for performance pay.