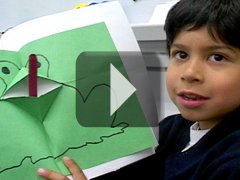 ASCEND teacher Elena Aguilar moved on to become an instructional coach -- and an Edutopia.org blogger. (Read her occasional blog posts about where these students are now, including this one.) ASCEND is still growing and going strong, with Principal Larissa Adam at the helm.

From the outside, you would be hard pressed to find anything special about ASCEND School. The original buildings and added-on portable classrooms look just like countless other aging inner-city school facilities across the country. But looks, as they say, can be deceiving.

Behind the 8-foot-high cyclone fence that surrounds much of the facility is a school that has captured the imagination and excitement of educators and parents alike. In a neighborhood that has seen more than its share of challenges, this small K-8 school is a daily demonstration of the powerful changes that can happen when an entire community comes together to make education work for kids.

ASCEND (A School Cultivating Excellence, Nurturing Diversity) opened its doors in September 2001. It was one of the first five small, autonomous schools to be approved by the beleaguered Oakland Unified School District, the fruits of a nearly ten-year-long community effort to institute grassroots reform for Oakland's poor, mostly minority students. (As of September 2003, there were 15 small schools in the district.)

Central to the mission of this low-income, minority school is a commitment to the Expeditionary Learning Schools Outward Bound model of instruction and schoolwide reform that emphasizes project learning that extends across curriculum areas and takes students out of the classroom and into the community. It's a model, says ASCEND principal Hae-Sin Kim, that's grounded in the notion that the very best kind of education is one that teaches students how to ask questions -- and how to discover their own answers.

"The assumption in a lot of schools today is that ideas have already been formed and what you need to do is learn them and regurgitate them," says Kim. "What most schools don't teach is, 'How do you form your own ideas?' 'How do you create your own knowledge?' 'How do you merge your own ideas and the ideas that are already out there to create even more powerful ideas?'" says Kim. "That's the piece that expeditionary learning really helps with."

Twice a year, students and teachers decide on the focus of their expedition -- the area of inquiry that will shape and guide their study for the next several months. Although the subjects vary considerably from one grade to the next (from the life cycle of frogs to the role of change makers in society to the study of the causes and consequences of war), every expedition shares some common characteristics: an emphasis on student-led inquiry, connections to the community (through interactions with local experts and service-learning projects, for example), and an integrated curriculum with a strong emphasis on the visual and performing arts.

ASCEND first graders became experts in frogs after a multiweek expedition exploring the life cyle of the jumpy amphibians.

From Frogs to Farm Workers

For Lucy, a first grader at ASCEND School, spring 2003 was all about frogs. She and her classmates spent eight weeks discovering everything there is to know about the amphibians. They studied the characteristics of different frog species throughout the world (Lucy's personal favorite is the red-eyed tree frog), they got an up-close-and-personal view of the life cycle of a frog by caring for an aquarium full of tadpoles, and they wove their study of frogs into a wide variety of reading, writing, and art activities. The result was a classroom full of frog experts eager to share their knowledge with friends, family -- just about anyone who was willing to listen.

What's clear after just a few minutes with Lucy and her classmates is that the six-year-olds have become experts: They can guide you through the life cycle of a frog -- from the laying of the eggs (called frog spawn, Lucy explains) to the full-grown frog 12-16 weeks later. They can tell you about the respiratory system and about the way various species protect themselves.

They are, as Principal Hae-Sin Kim puts it, "invested."

While Lucy and her classmates were immersed in their frog expedition, just down the hall, fifth graders were engaged in their own learning journey -- an exploration of what it means to be a change maker in society. The fifth-grade expedition merged grade-level language arts and social studies standards (which include reading "historically or culturally significant works of literature" and exploring early U.S. history and call for, among other exercises, writing persuasive essays and letters) into an integrated, relevant curriculum.

Students read biographies of such notable change makers as United Farm Workers leaders Cesar Chavez and Jessie de la Cruz, Underground Railroad conductor Harriet Tubman, and Martin Luther King Jr. They studied the history of the farm-worker movement and learned about the daily struggles of children just like themselves who spend their days picking strawberries instead of going to school and playing with friends.

They interviewed and wrote biographies about change makers in their school and community -- from the director of the nearby La Clinica de la Raza to city council and school board members to ASCEND parent Emma Paulino, who led the effort to start the new school. And they became change makers themselves, writing persuasive essays and letters to officials about the injustice of children working in the fields and the need for more libraries in their neighborhood and city.

Reflecting back on the change-maker expedition, ASCEND fifth grader Iris says she learned a lot about the importance of taking risks and persevering despite ridicule and setbacks. When she looks around at her Oakland neighborhood, Iris sees plenty of things she'd like to change.

And Iris isn't alone. Individually and as a group, fifth graders have identified problems in their community that need fixing -- from putting an end to street-corner drug dealing to curbing the rise of gangs. They then covered their classroom doors with slips of paper expressing their hopes and dreams for changing their neighborhood and the world: Dominique writes about stopping crime, Koy wants people to become more involved in their communities, and Eddie wants to change the world by giving homeless people houses.

"The students understand that change makers aren't just people who died 50 years ago," says fifth-grade teacher Larissa Adams. "Everyone can be a change maker -- even the students themselves."

As part of their expedition on war, seventh graders wrote, directed, and performed a play exploring the effects of war on one family.

At a time when instruction in the arts has all but vanished from many public schools, music, dance, drama, and the visual arts are alive and well at ASCEND School. As you walk down the corridors and into the classrooms at ASCEND, evidence of the school's arts-integrated curriculum is everywhere.

Third graders have designed imaginary animals and habitats out of papier-mâché. Fifth graders are studying portraiture and then painting portraits of individuals they've profiled from throughout the community. Sixth graders have spent weeks learning to play the tabla drums, along with Indian chants and prayers, as part of their expedition on ancient and modern India. During the course of the school year, seventh graders have written and produced a movie on AIDS, performed a play about a family torn by war, created a music CD, and explored the age-old conflicts between war and peace through thought-provoking collages.

Thanks to a unique partnership between ASCEND and several community arts organizations, every classroom teacher works closely with visual and performing artists to weave music, dance, and the visual arts into all aspects of the expeditionary-learning curriculum. The arts add depth and perspective to the students' studies and provide a powerful vehicle for self-expression.

ASCEND is one of more than a dozen small, autonomous schools that have opened in Oakland, California, as part of a grassroots effort to reform the ailing school system.

Underlying everything at ASCEND -- from arts integration to the commitment to creating challenging and relevant curriculum -- is the goal of educational equity for the families of Oakland's flatlands.

For parent turned activist Emma Paulino, that means creating a safe, supportive, and challenging school for kids and a place where parents are respected and valued. Paulino, who was active in the effort to open ASCEND, vividly recalls her feelings of frustration, anger, and sometimes helplessness at the "old school."

For teachers like Elena Aguilar, it means developing relevant and engaging expeditions that encourage students to ask tough questions. It means creating an environment, as she did with her class'd spring 2003 study of the Iraq war, where students feel empowered -- as individuals, as students, and as citizens.

For students like seventh grader Huber, who found himself the object of media scrutiny when he participated in a protest to call attention to the plight of children in Iraq, it means asking questions, exploring opinions and ideas, and finding his own voice.

"It was really cool, speaking my opinion," says Huber, "because I felt that that way, we could be heard, and I could be a role model for thousands of children."

"What does it mean to prepare students who are primarily of color coming from inner-city Oakland to be really ready for the world?" asks Kim. "It's a curriculum that pushes kids," she explains. "It's not making them feel safe or comfortable all of the time. It's supposed to be frustrating. It's supposed to push them out of their comfort zone, give them new experiences, force them out of the community, teach them to ask questions and to find answers," says Kim.