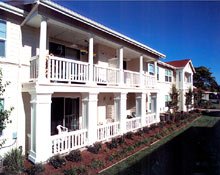 Central Florida's Osceola County School District has sprung a leak, and it's threatening to worsen. In 2005, 59 of the district's 600 new teachers left within four months of the start of the year.

A primary reason: They couldn't afford to live there. Others still commute 30 or 40 miles each way from the more urban but less expensive Orange County. Next year, school board member Tom Greer predicts, "they'll be teaching there."

Across the country, districts in high-priced real estate markets are suffering a similar drain, and increasingly they're seeking creative ways to entice teachers with housing perks. Though some, such as New York City's, offer housing stipends, others are pursuing a bolder tactic -- they're building houses.

The Santa Clara Unified School District, in California's largely upscale Silicon Valley, took this leap in 2002 when it opened Casa del Maestro, a forty-unit apartment complex built on district-owned land for just $6 million; a Bay Area developer did the work at cost. Teachers who have worked in the district for less than three years and remain employed in it can rent a two-bedroom, two-bathroom apartment for up to five years for $1,200 a month -- about half the market rate.

"We were having a hard time attracting and retaining teachers," says Superintendent Rod Adams. "It's been definitely worth the investment." Actually, not a dime has come from the district's general fund; rent covers building maintenance (a separate foundation manages the property) and loan payments for the construction. The project has handily paid off; only 7 percent of teachers who live in the complex have left the district, compared to 37 percent of new teachers hired during the same years who live elsewhere. So pleased is the school board that it plans to start building a thirty-unit addition to Casa del Maestro in March.

Districts across Florida may soon consider such options. A state bill passed last spring allows districts to partner in building workforce housing (for public safety and health workers, as well as teachers) by donating land to a city or county government for that purpose. Osceola County is jumping at the chance. Over the past five years, home prices there have ballooned more than 50 percent, says Mike Horner, president of the local chamber of commerce. Low interest rates, a soft stock market, and a seemingly endless stream of new residents from chillier states have prompted investors to buy apartments and convert them to condos, selling for upward of $200,000 -- a daunting sum on a starting teacher's salary of $36,200.

The district and its partners want to build 120 two-bedroom apartments with a market value of about $1,200 a month, which essential workers could rent for $840. Teacher recruitment is especially urgent in Florida, given its growing population and a state law that requires schools to shrink class size by 2010 to eighteen for primary grades, twenty-two for grades 4-8, and twenty-five for high school. The year before the law took effect in 2003, average class size was twenty-four at all levels.

The pool of new educators is low. State universities graduate only a fraction of the 20,000-30,000 teachers the state needs to hire each year.