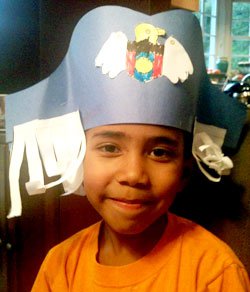 "Because he freed us from England," he said.

"Some people think he was good, others disagree," I said.

"My teacher thinks he was good," my kindergartner responded.

I then explained to my son that I thought he'd done some things that weren't fair. "George Washington owned slaves and one of the reasons he wanted to be free from England was because he wanted to be even richer than he already was," I told him.

My son had no comment and resumed eating his granola. We're pretty anti-slavery in our house, so I imagine he was contemplating that contradiction.

I controlled the tirade that threatened to erupt; I am quiet about my many pedagogical disagreements with my son's teacher. I'm making a big effort to embrace the public schools in the district that I've worked in for 15 years as I send my only child into its classrooms.

My son's class has been learning about George Washington and Abraham Lincoln for over two weeks -- and the unit is not yet finished. They cut out construction paper faces of Washington and glued on cotton balls for wigs; they memorized lyrics to a song which stated that "Lincoln freed the slaves;" they stapled together paper hats "like the patriots wore" and listened to stories about Revolutionary War battles. 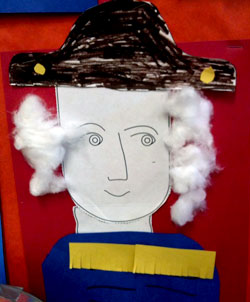 The George Washington comment had me boiling for two reasons:

First, this is not the way to teach history. This approach -- an uncritical, history-as-true-fact, spoon-fed-hero-worshipping of rich white men and the unquestioned glorification of those who have always had power -- is not acceptable for my kid or any kid.

Secondly, I'm shocked by any teacher's lack of cultural competence. I can't imagine what one might think as they look at students' faces, such as those of my son's classmates (some of whom are African American or recent immigrants), and declare, "George Washington freed us from England." He sure didn't free my people who immigrated in the twentieth century, and he sure didn't free my husband's ancestors who were brought to this country in shackles.

In California history classes, along side the content standards, there is a set of standards for teaching historical analysis skills -- starting in kindergarten.

If our schools are going to be successful in preparing our young people to actively participate in a democracy then we need to go far beyond just teaching the content standards in history. Going deeper means this:

Students understand that history is a construction.
This means that students recognize that "there are no truths, only stories," as the Native American poet, Simon Ortiz, says. Students also understand that the history that has been written down is a story told by the victors, the conquerors, those with power who constitute a tiny segment of the population, and that it is a story told often to justify their own power.

Students know how to deconstruct history and re-write it.
This means that children learn how to be historians. They can analyze primary sources and develop their own interpretations. They can identify bias in other people's interpretations and consider how privilege and status impact the way events are recorded. They also look for and listen for stories that have not been told, and they see the value of bringing those stories to light.

Students know their own histories.
A kindergartner should be learning about his own family history before learning about George Washington. He should first learn about how the past affects the present, about the people he comes from, and about the struggles and accomplishments of his ancestors. Maybe such a sequence of instruction would result in more kids enjoying history -- in fact, that should be another standard.

Students enjoy studying history and recognize the value in doing so.
This means that students understand that in order for us to better our world, to fix some of the terrible injustices and perhaps even save our planet, they need to understand the past. They need to understand how we got to where we are and they need to recognize their own power to be able to change the situation. History is the ideal curriculum to allow this to happen, but only if students enjoy the material and see how it can be a tool for empowerment.

Here's what I mean: A teacher could introduce the study of American presidents by reading a picture book that presented an alternate perspective on Washington, perhaps told from the point of view of one of Washington's three-hundred slaves. She could have students consider what makes a hero or what makes someone worthy of respect, asking them to evaluate Washington's actions.

Even when instructing our youngest students, we communicate beliefs and values about people and power. All teachers should be clear about what beliefs they are communicating and should question their appropriateness.

Here are a few resources to think through a framework for teaching history:

What is your philosophy for teaching history? What standards do you think should be added?