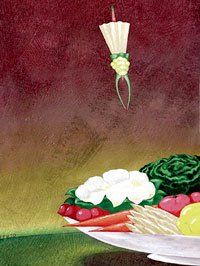 The alarm has been sounded: American kids are overweight and ailing as a result -- the U.S. Centers for Disease Control and Prevention (CDC) estimates that one in three kids born in 2000 will develop diabetes (encouraged by those extra pounds) in their lifetimes. Though some school districts have offered institutional fixes, others haven't gone much beyond a ban on cupcakes at class parties. This year, savvy schools will figure out what some big food and beverage companies already have discovered: Improving children's health is big business.

In May, former president Bill Clinton brokered a deal in which four of the nation's biggest beverage distributors agreed to stop nearly all soda sales in public schools. You could call it purely altruistic, but it's a safe bet that those companies know they can profit as much from distributing Powerade in campus vending machines as selling Dr. Pepper. Thirsty schoolkids are captive consumers -- they'll choose from what's available, particularly if their parents approve.

Take the Fayette County Public Schools, in Lexington, Kentucky, a school district featured in the CDC's "Making It Happen" report on schools with model nutrition programs. In 2003, the district brandished a secret weapon -- a parent with experience in the food industry who saw that healthy fare and decent revenue could coexist. He helped negotiate a new vending machine contract that boosted the proportion of "healthy beverages" (water, juice, and sport drinks) and nutritious snacks offered in school. Sugary sodas and snacks sold for higher prices than the healthier alternatives, and schools earned a higher commission on the more healthful items. The vendor also agreed to pay the schools $500,000 more for the five-year deal than the previous contract had paid. Ka-ching! Here's the kicker: The kids bought it. And ate it. And drank it. Vending revenue to the schools actually went up the following year.

Anecdotal evidence from schools that have pushed healthier food seals the deal: Students' disruptive behavior drops when their sources of excessive fat, salt, and sugar are diminished.

Also on the horizon: meal partnerships between schools and local farmers, much like one found in southern California's Santa Monica-Malibu Unified School District, where nutrition specialist Dona Richwine says her farmers' market salad bar costs about the same as a standard hot lunch. It's labor intensive to clean and cut vegetables, she says, but produce is affordable in season and she uses cheap commodity items to balance out the labor costs. "If you want to do this," Richwine insists, "you can make it work."