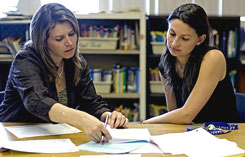 Late last summer, an Arizona blogger calling herself Beth Anderson began writing online about how excited she was to begin her first year as a teacher. She had dreamed of teaching since age six.

Quickly, though, her excitement turned to despair. Despite her inexperience, she got saddled with a combined fourth- and fifth-grade class. The superintendent instructed her to teach to the state test. On day six, she wrote, "Every night, I come home, and it's not enough. I still have plans to do, papers to grade, parents to call, and then maybe I can squeeze dinner in before bed. I hate this right now. I hate being exhausted and sad and stressed and unprepared, despite the fact that I work about ten to twelve hours a day." By mid-October, she was taking antidepressants and debating whether to quit teaching forever.

Compare that to the experience of Allie Bresnan, who started teaching kindergarten in 2003 in the Ravenswood City School District, in East Palo Alto, California, fresh out of a credential program. She faced a challenging group of students, many of whom lived in poverty and spoke a first language other than English, but she had a mentor whose full-time job it is to support new teachers. Her mentor modeled lessons, suggested classroom-management strategies, found extra resources, and, above all, reminded Bresnan weekly that she was doing a good job. The new teacher has grown so much that now, in her fourth year, the principal has made Bresnan the school literacy coach. The mentoring, she says, is why.

Nationwide, mentoring and other supports for new teachers are on the rise, as schools strive to stop the next generation of educators from dropping out of the profession like grains of sand through a wicker basket. According to research by Richard Ingersoll, a professor of education and sociology at the University of Pennsylvania, between 1990 and 2000, the number of beginning teachers who participated in a formal induction program with a mentor jumped from 51 percent to 83 percent. Of all the supports offered, from orientation seminars to a reduced course load, mentoring was among the most common.

"They never say, 'I left because of the kids,'" says Kathleen Fulton, director for reinventing schools for the twenty-first century at the National Commission on Teaching and America's Future. "When teachers leave, they say it's because working conditions were so bad, and that's the adversity of not being supported."

The mentoring trend is linked in part to a growing national conversation about the importance of the classroom teacher in education, says Ann Byrd, director of programs at the nonprofit Center for Teaching Quality in North Carolina. But the problem on the ground is hardly academic: Schools are simply failing to hold onto their newest hires -- nearly 50 percent leave the profession within five years, Ingersoll reports -- and mentoring is rapidly proving to be a reliable way to keep them.

"If you didn't have a mentor, you'd get so frustrated you'd quit," says Edward Dorsey, a former property manager in his fourth year of teaching in Ravenswood. "A mentor smooths out the rough parts." 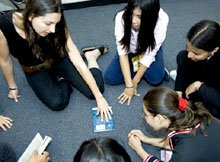 There's evidence on a small scale of what Dorsey says; after mentoring was instituted in East Palo Alto, the number of beginning teachers staying for a second year rocketed from 27 percent to 84 percent. And nationally, Ingersoll has found that having a mentor in one's own specialty, such as English or science, cuts a new teacher's risk of leaving at the end of the first year by 30 percent. (The effect of a mentor outside the teacher's field is not as significant.)

Intensive support for new teachers can be expensive, says Fulton, "but if you're going to lose a teacher, it's more expensive." Factoring in recruitment and training, the Alliance for Excellent Education estimates the national cost of turnover at $4.87 billion a year. Beyond the money drain, Byrd says, attrition stunts school culture and kills any chance for faculty members to build on each other's strengths. Even worse, turnover is highest in the schools in the poorest neighborhoods, leaving the children with the greatest needs with the most inexperienced teachers.

Across the country, mentoring programs look so different from place to place that they can hardly be called by the same name. Some states have induction requirements, some have none, and many school districts do it on their own. What in some districts entails structured weekly meetings with a veteran who's given release time, says Ingersoll, in other districts boils down to a twenty-minute cup of coffee in September. The teachers in Ravenswood are getting the Cadillac -- nay, the shiny new hybrid SUV -- of mentoring programs.

Ravenswood's program is supported by a $2.4 million grant from the William and Flora Hewlett Foundation and run by the New Teacher Center (NTC), at the University of California at Santa Cruz, which helps districts in thirty-four states design and implement teacher-induction programs. The mentors here, all former teachers, work with ten beginners each year and stick with them for their first three years. In addition to sharing teaching ideas, the veterans help each new teacher create a professional learning plan, and they track progress throughout the year.

The NTC model supports the argument of teacher-quality advocates, who say it takes more than a mentor to keep new teachers and help them succeed: Beginners also need added release time, opportunities to observe other teachers, and the support of an entire "school village," as Byrd calls it. In fact, the more support components a new teacher has, the more likely he or she will stay, Ingersoll's research shows. Besides mentoring, only structured collaboration time for teachers in the same field provides greater protection against quitting.

"It's a pretty straightforward finding that you get what you pay for," Ingersoll says. "If you don't offer much, you don't get much improved retention. If you offer a comprehensive package, you get really large gains." 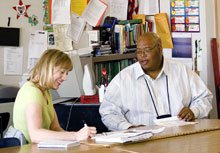 So, the NTC team has reached into every corner of the Ravenswood district to realign the focus onto the teacher (and, indirectly, the student). After-school teachers, principals, and the superintendent all also have their own mentors. The team bought reading-level books and math manipulatives -- neither of which the schools had -- and secured extra support for teachers struggling with special-needs students in their classes. At the team's urging, teachers now meet weekly with colleagues to look at student-assessment data and plan lessons.

For schools without foundation grants, simpler models can work, says Ellen Moir, executive director of the NTC. For example, a high school could release a veteran teacher for mentoring for one period a day, or an elementary school could bring in a substitute for half a day each week. The key is that mentorship must be more than what Moir calls a "buddy system." Mentors must be chosen not only for their teaching expertise but also for their skill in working with other adults, and they need training and time to do their job well. A mentor juggling a full course load might leave a novice an encouraging note, Moir says, "but they're really not getting at the heart of teacher quality."

A few districts have joined forces with other institutions in the community to create mentoring programs. Four districts in and around Atlanta, for example, are working with Georgia State University and other partners to connect classroom veterans with university graduates who are beginning teachers. The Chicago Public Schools and the local chapter of the National Retired Teachers Association (part of the AARP) run a three-year-old program in which retired teachers mentor about 150 of those just starting out.

The next, and crucial, litmus test for mentoring and other kinds of induction will be scientific evidence on whether they boost student achievement. Both the NTC and organizers of the Chicago retirees' program are planning studies to find out.

For the moment, advocates can point to early signs of progress, such as those at the two schools where Ravenswood's program began. Cesar Chavez Elementary School, which includes students in grades 4-8, climbed from the lowest decile in the state on standardized-test scores into the next higher decile within three years. The Green Oaks Academy, a K-3 school, boosted its scores by more than 20 percent in spring 2006, when the students of the first cohort of new teachers finally reached testing age. The progress could have come from student motivation, or even chance. But it's not a stretch to think that the cause was better teaching and that the coordinated mentoring, professional development, and data-driven instruction had something to do with that.

"What my kids learned last year versus what they learned this year is exponentially different," Melissa Zipper said last spring, at the end of her second year teaching at Cesar Chavez. "Mentoring changed my life."

Clearly, it changed her students' lives, too.