This article accompanies the feature "Never Too Young: The International Baccalaureate Program Goes Down a Grade."

Last January, President George W. Bush lauded the program as a model for boosting student achievement in science and math. One month later, a school district in Pennsylvania tried to abolish it after several board members complained about its costs and its philosophy.

After decades of operating quietly on the margins of education, the International Baccalaureate program has leaped into the limelight, sparking the controversy and confusion that inevitably accompany innovation. Is IB the best way to improve the nation's schools, as supporters claim? Or is it an elitist fad at best -- and perhaps anathema to American values, as some critics contend?

"The program focuses on getting kids to think deeply about disciplines, about learning, and about themselves," says David Weiss, president of the Guild of International Baccalaureate Schools of the Northeast and assistant superintendent of Commack Public Schools, on Long Island. "There are many people who don't think that ought to be included in education."

For much of its thirty-eight-year history, IB was available in a sprinkling of high schools -- perhaps the best-kept secret in education. But as school districts strive (and struggle) to improve student performance, IB is expanding quickly. In the United States, 521 high schools offer IB, a demanding college-prep curriculum with an emphasis on global education -- up from 327 in North America six years ago. Last May, 13,089 students were candidates for the IB diploma, and 27,557 more took at least one IB exam without necessarily enlisting in the full program. Once adopted on a school-by-school basis, the IB Diploma Program now is embraced by entire districts, including those of Philadelphia and Chicago, in a push to raise high school standards. Lower-grade versions of IB, designed to improve learning from day one, are gaining steam in elementary schools and middle schools. (See the Edutopia article, "Never Too Young: The International Baccalaureate Program Goes Down a Grade.")

In many ways, this newfound popularity is no surprise. IB offers two things almost every district wants: world-class academics and prestige. Newsweek's annual list of the one-hundred best high schools in America uses a formula that includes the number of IB tests taken in a school, so a big program can earn the glossy stamp of public approval. And despite IB's gilt-edged beginnings -- it was created in Switzerland to provide a standardized, internationally recognized diploma to the children of globe-trotting diplomats and business executives -- the program has always appealed to certain U.S. educators eager to breathe energy and rigor into that sometimes humdrum experience called high school.

"IB is the very best preparation we can give our kids," says Carol Burris, principal of South Side High School, in Rockville Centre, New York. "It embeds the best educational practices there are: authentic assessments, different modalities involved in learning, and group work. It's rich, and it promotes critical-thinking skills."

Yet, at its core, IB makes an unlikely bedfellow for public schools in the age of No Child Left Behind, with the federal law's mandated focus on reading and math scores. IB, a broadbased liberal arts curriculum, aims to inspire independent inquiry and instill humanitarian values. The notoriously intense final exams in the high school program, which take roughly twenty-five hours over the course of three to five weeks, emphasize oral and written analysis and argument, not penciling in multiple-choice bubbles.

IB isn't easy or cheap to set up and run, which makes it a challenge to implement in cash-strapped districts. The fact that schools without deep pockets are still adopting IB indicates just how hungry they are for change. Implementing it in high school requires six strong academic departments working together, comprehensive curriculum development, and extensive teacher training -- almost retraining, sometimes abroad. "You're asking teachers to look at their practice, to focus on depth of study over breadth, to focus on what students are learning rather than what you're teaching," Weiss says. "You're really pushing the edge of what education is about."

IB typically exists alongside regular high school classes, and an IB diploma is awarded in addition to the standard certificate. To qualify, students must complete at least one IB course in each of six areas: literature, foreign language, math, science, arts, and individuals and societies (which includes history and economics), plus a two-year interdisciplinary seminar called Theory of Knowledge. Students also must write a 4,000-word research paper, known as the extended essay, and log at least 150 hours of what is called Creativity, Action, and Service -- everything from sports to performing onstage to ladling soup at a homeless shelter.

More than 1,400 high schools in 124 countries offer IB. In the United States, academics are the selling point. IB classes look and sound like college seminars, not standard high school fare. "Rather than a chalk-and-talk method for forty minutes, you learn strategies to help students investigate and analyze material, and learn it without a lecture," says Constance Addabbo, assistant principal and IB coordinator of Dobbs Ferry High School, in suburban Westchester County, New York.

The courses carry a heavy workload for students and teachers alike -- and most everyone agrees it pays off. College admissions officers like IB, top universities grant credit for it, and graduates consistently say they sail through postsecondary education after those grueling IB years. Of course, the program draws bright, hardworking students who would perform well with any halfway decent high school education. Still, the fact that they shine academically has made the program a darling among politicians, including George W. Bush, who are bent on boosting school achievement.

IB isn't just about scholarship, however; it also offers a specific worldview. "The academic rigor of IB is important, but its humanitarian values are everything," Ian Hill, deputy director-general of the International Baccalaureate Organization, in Geneva, Switzerland, writes in his 2005 book, Supertest: How the International Baccalaureate Can Strengthen Our Schools, coauthored by journalist Jay Mathews, who also compiles Newsweek's high school list. A position paper by IBO, the independent group that governs the program, elaborates: "The IBO is unapologetically idealistic in believing that education can foster understanding among young people around the world, enabling future generations to live more peacefully and productively than before."

The philosophy echoes through IB classrooms. One morning last winter, a French class at Rockville Centre's South Side labored over vocabulary lists, like language students through the ages, while learning about the Alsace region, which was passed back and forth between Germany and France from 1870 until the end of World War II. But this was no mere Berlitz exercise, as the textbook made clear; this was a lesson on "linguistic and cultural conflict."

"Students are asked to investigate the cultural constructs through which they view the world," says John Murphy, IB coordinator at the suburban school. A biology class will explore not only the protein sequences of DNA but also thorny societal questions: To what extent are we defined by our genes? By our cultures? In a unit on the American Revolution, students may not have to memorize the names of every bloody battlefield, but they probably will compare and contrast the war's fife-and-drum patriots with other revolutionaries in the Americas, such as Che Guevara and Simón Bolivar.

This international perspective often ignites the imagination of students. "Being in an IB program has opened my mind to different people and cultures," says Gary Anthony, a 2006 graduate of New York City's Baccalaureate School for Global Education, one of two all-IB public schools in the United States. (The other is the North Hills School, a charter school in Irvine, Texas.) Anthony, now a freshman at Hobart and William Smith Colleges, in Geneva, New York, credits IB with his decision to study political science and international relations "just to expand my knowledge of the world." 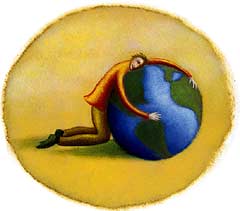 But IB's global vision nettles critics. In spring 2005, two school board members in Minnetonka, Minnesota, called IB un-American and un-Christian, and tried unsuccessfully to dump it. Last February, five of nine members of the school board in Upper St. Clair, Pennsylvania, voted to end the program. Parents protested and the American Civil Liberties Union, fresh from its victory over the teaching of intelligent design in Harrisburg, at the other end of the state, sued. The district reinstated the program until 2008.

The IBO Curriculum and Assessment Centre, in Cardiff, Wales, develops the curriculum's broad outlines and conducts testing and scoring of all students every spring. But each school selects and tailors courses, which makes IB both remarkably consistent from program to program and surprisingly idiosyncratic. IB seniors at South Side take the same Theory of Knowledge exam as their cohorts at Flathead High School, in Kalispell, Montana, and Menntaskólinn vid Hamrahlid, in Reykjavik, Iceland -- but along the way the three classes may study altogether different texts and complete wildly diverse assignments.

Some schools set IB entrance requirements -- a certain grade point average or standardized test ranking -- in the belief that a student must show at least some academic commitment and competence to succeed. But at many schools, IB classes welcome all comers, because the school board or the principal insists that every child deserves the gold-standard education traditionally reserved for the "gifted."

At Dobbs Ferry, about one out of five graduates qualify for the IB diploma, but 70 to 80 percent of all juniors and seniors take at least one IB course. Some have passion for a subject, such as film or art, but many simply shoot for the challenge -- perhaps to prove to their teachers, or themselves, that they can persevere in the same course that kids bound for Ivy League schools are sweating through. "It's an opportunity for a teen to say, 'I tried something more difficult,'" Dobbs Ferry's Constance Addabbo says.

South Side launched IB twenty-five years ago with three stellar students and ran it as a program for the gifted for about a decade. When the school abolished IB entrance requirements, more students trickled in, and by the late 1990s, about one-fourth of seniors were candidates for the special diploma. "The philosophy was, 'OK, many kids can do this,'" Carol Burris recalls, "'but not all kids can do this.'"

Then she became principal and wondered, Why not? Is there a way to get all kids to do IB? With near-missionary zeal, Burris and IB coordinator John Murphy set out to try. The teachers and administrators developed pre-IB courses so the real thing wouldn't come as such an intellectual shock in eleventh and twelfth grades. Now, all freshmen and sophomores take advanced English and history, with assignments in literary commentary, oral presentations, and historical investigations modeled after IB assessments. The school also received funding for support classes tied to the curriculum to help lowerperforming students pull off top-tier work. And counselors went into overdrive. "They push, support, nudge, cajole the kids into doing it," Burris says.

Of the 265 graduates in South Side's class of 2006, 124 -- nearly half -- were IB diploma candidates. The statistics have made the school a poster child for IB inclusion, but Burris and Murphy are determined to get more kids -- all kids -- to reach for the educational gold.

"Some people say that if the student hasn't previously demonstrated what you envision as academic excellence, they don't belong in the program," Murphy says. "What we've found is the exact opposite. If you want academic excellence, put students in an academically excellent program. They'll rise to the occasion."