The winter darkness closes in on Stockholm as Ishuttle two small children home through the bitingcold, reflecting on just how I got here. Whatexactly was it that convinced me to leave the charmof Paris and a great job as a museum curator a few years back?

I have never been much of a planner, which is why theSwedish adage "There is no bad weather, only bad clothing,"has always unsettled me. Though some people have a gift forstrategic thinking, I have always tended to make the biggestdecisions in my life only when the moment arrived.

This is not to say there was a lack of careful consideration, butrather that projecting far into the future always remainedabstract. I prefer to adapt and react to what is, rather thanwhat might be. But now that I am responsible for the futureof two children in a foreign country, I find that I am changingtactics.

The learning curve is steep for any new parent, yet it seemsexponentially so when you decide to raise your childrenabroad. Aside from the language pitfalls and other culturaldifferences, there are also life's fundamentals to be tended to,particularly education.

First, you have to try to figure out the educational systemand then resolve the fact that you will never have complete confidence,simply because it is different from what you know. I'vespent considerable time on this latter phase, because in manyways the Swedish approach to early-childhood education is sodifferent from the American. 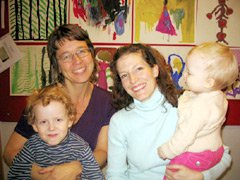 Everything starts later. Due to a generous eighteen-monthparental leave, children do not -- and cannot -- begin collectivecare until after the age of 1. Most then attend a förskolan(preschool) for children ages 1-5. At age six, most go to apreparation year,and compulsoryeducation finallybegins at age seven.I was stunned bythis late start for school and, until recently, was concernedabout my children getting bored or lagging behind. Then I realizedthat this was probably because my memories of early educationwere all geared toward quantifiable achievements:learning to count, recite the alphabet, and so on. There was afocus on making "progress," on getting that gold star.

What I hear about American preschools today, includingreferences to new features such as prewriting, seems to confirmthis memory. I like the idea of children learning theirABCs and 123s early, but rather than signing up my son for aprivate international school with the American timetable, I decidedto look into why the Swedes wait longer.

The Swedish philosophy behind a later start is to give children a longerperiod of self-generated learning. Educators here believe that this periodencourages natural curiosity without requirements and tests. Ratherthan sitting all of the children down together to learn the alphabet orcounting, teachers respond when a child expresses interest. Thisapproach allows children to develop in different areas at their own paceand lets them get a better sense of who they are before they're judged inrelation to others. It also gives children more opportunity to learn fromeach other, something not to be underestimated.

Curiously, the national preschool curriculum (Lfpö 98, thankfullyavailable in English) does not list quantifiable requirements; instead, itplaces an emphasis on socialization. There is mention of democracy andthe foundation of individual responsibility to encourage children to"actively participate in society." The phrasing is rather utopian, but Ihave actually seen it applied at my son's school. Something as simple asasking the children to choose an activity themselves or to vote on whichpark they will go to gives them both a voice and lets them learn aboutcooperation and decision making.

The curriculum also lists values to be instilled through example,which include "individual freedom and integrity, equal value of all people,gender equality, and solidarity with the weak and vulnerable." AsSwedish society becomes more diverse, tolerance of different races andreligions is increasingly important.

The fundamental practicality of Swedish preschool educationextends to the all-important matter of fees. American friends have toldme harrowing tales of day care and preschool fees in the States, so I wasastonished to learn that fees here are calculated according to householdincome, with a maximum fee of 1,260 kroner (about $200) per monthper child.

As an art historian married to a musician, I was relieved bythis discovery, particularly when I considered that the fee is nearly coveredby the monthly allowance families receive for each child. The lawsnot only state that all families with parents that work or study shouldhave access to preschool but also see to it, in concrete ways, that cost isnot a discriminating factor. And though preschool is state subsidizedand inexpensive, the quality of education remains intimate in scale; therecommended maximum ratio of students to teachers is 5 to 1.

I like the concept of my children having more time just to be kidswithout the pressure of performance-based exercises and tests,though, as someone brought up in the thoroughly American, results-basedapproach to education as practiced in Minnesota, I don't knowif I will ever be without some hesitation about the more relaxed stylehere in Stockholm. And yet, I can see that a system emphasizing theimportance of family life through many months of parental leave, sickleave to care for an ill child, and shorter, less intense days at preschoolsends a strong message to children that their needs and well-beingare significant.

When I asked Lena Magnusson, my son's favorite teacher, to namethe most important things she taught, she replied, "To be a good friendand to believe in their own abilities." This was not the answer I expected,yet I cannot think of two more important building blocks for the restof my son's life.

Bronwyn Griffith is an art historian and gallery curator.

As the World Learns > Uganda