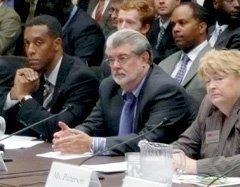 Access to high-speed Internet and other telecommunication tools is a "digital civil right" that the United States should guarantee to every student, George Lucas told members of Congress June 24.

Lucas, a filmmaker and chairman of The George Lucas Educational Foundation, testified before the House Subcommittee on Telecommunications and the Internet that Congress should expand and modernize its twelve-year-old program of telecom discounts to schools and libraries. To achieve his vision of Edutopia, in which students direct their own learning while teachers nurture their curiosity, he said, the ultimate goal should be to make these connections for every school and library not just more affordable, but free.

"Telecommunications provides the new learning platform of this century and is replacing the textbook as the medium through which a modern education is provided," Lucas said. "The world's knowledge is now available online, far beyond what books and materials can provide in schools and libraries themselves."

The E-rate, as the federal discount is called, ranges from 20 to 90 percent, depending on the school's need. Created through the federal Telecommunications Act of 1996, it covers telecom services, including phone and Internet, and internal school connections. The government pays for the discounts, up to $2.25 billion a year, with mandatory contributions from telecom companies and customers.

Congressman Edward Markey, who chairs the subcommittee, called today's hearing on the E-rate to help his group weigh potential changes to the law next year. Markey credited Lucas -- who testified before the same group about telecom access in 1994 -- as his inspiration for writing the E-rate program into the law. In one of many Star Wars metaphors subcommittee members made during the hearing, U.S. representative Lee Terry likened the defenders of the Universal Service Fund to "the Luke Skywalkers riding in to save the fund from those who want to destroy it, the Darth Vaders."

Lucas urged the lawmakers to extend the 1996 definition of "universal service" to include high-speed broadband Internet service, and to anticipate the advent of connective technologies to come. In supplemental written testimony, he pointed to examples of powerful learning -- students watching heart-bypass surgery by videoconference, or using online simulations to experience ancient civilizations -- made possible only by the kind of high-speed connections lawmakers in the 1990s couldn't foresee.

Although Internet access in public schools has ballooned in the past decade, Lucas noted that not all these connections are broadband. According to the Organization for Economic Cooperation and Development (OECD), in Paris, he added, the United States trails fourteen other nations in broadband access.

"Americans were pioneers in creating the truly wondrous technology that we are talking about today," Lucas concluded in the written portion of his testimony. "Innovation is in our DNA. Now, we need to make sure it is also in our classrooms and that every American child grows up knowing how to use the Internet and benefit from its rich and powerful resources."