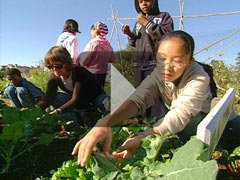 The apple crisp is baking in the oven and the smell of bubbling cinnamon, sugar, and apples fills the air and makes the kitchen feel warm and cozy -- the perfect contrast to the cold and windy November morning just outside the door. Groups of students sit with their teachers around large farm tables set with tablecloths, centerpieces, and plates painted with delicate blue flowers. Some are talking and laughing, others are just enjoying the delicious aroma, waiting anxiously for their homemade dish to be served.

Welcome to the kitchen at the original Edible Schoolyard, located on the campus of Martin Luther King Junior Middle School in Berkeley, California. This 1-acre urban garden and fully equipped kitchen are the home to a thoughtful, curriculum-based program designed to connect students with the earth, the environment, and an eclectic group of adults outside the traditional classroom. The Edible Schoolyard Project began in 1994 when the seed of an idea was planted by world-renowned chef and food activist Alice Waters. Her dream: to provide students with the opportunity to grow the food and then participate in the preparation of their own school lunches. "We're in the middle of a health epidemic," says Waters. "If we could somehow bring in a curriculum around school lunch, we could begin to change the way kids think about eating."

Although the dream of having students prepare and eat their own organically grown, healthy lunches is still a work in progress, the school's garden and kitchen are now a world-famous success story -- a model for schools throughout the country (and the world, really) that want to provide students with an integrated, hands-on gardening curriculum.

MLK is a large urban middle school that serves a diverse student body -- from the sons and daughters of UC Berkeley professors who've grown up shopping at the local farmers' market to low-income youth who've never taken so much as a single bite of an organically grown fruit or vegetable. But by the time students leave eighth grade here, they all share a deep and lasting appreciation for the goodness and the value of growing and preparing healthy, delicious food. 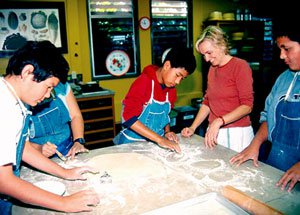 Educators involved in the Edible Schoolyard describe the program as a "seed-to-table" experience, referring to students' involvement in everything from preparing the soil and planting, tending, and harvesting crops to preparing meals using organically grown, in-season produce. Through this year-round process, they develop an understanding of environmental stewardship, the interconnectedness of people to one another, to their community, and to the earth, and an appreciation for the value -- and the joy -- of meaningful work.

"We want to slow them down, to bust a hole in their day," says Chef Teacher Esther Cook, noting that students often come back and reminisce about even the most mundane of tasks.

"It's the simple things they remember and talk about," says Cook, "like helping me with the kitchen laundry or sitting at a table and folding napkins and talking about their day."

"Our students are so stimulated with 'stuff' all day long," she adds, "that they don't always stop and get the feeling of doing ordinary things for pleasure."

Although every student benefits from kitchen and garden lessons, sixth graders at MLK are really the heart of the Edible Schoolyard program. They spend two ten-week sessions in the garden, working a full ninety minutes every week. In those weeks that they aren't in the garden, they're typically in the kitchen, also for ninety minutes at a time. (A detailed schedule, along with lessons, planning tips, and more is available at The Edible Schoolyard Web site.)

Credit: Edible Schoolyard, Martin Luther King Jr. Middle School
Students and their teachers gather in the Ramada at the beginning and end of each lesson in the Edible Schoolyard. Here they choose activities for the day, share what they've learned, and sample the fruits of their labor. 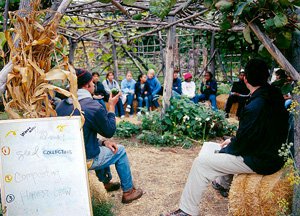 Credit: Edible Schoolyard, Martin Luther King Jr. Middle School
Students and their teachers gather in the Ramada at the beginning and end of each lesson in the Edible Schoolyard. Here they choose activities for the day, share what they've learned, and sample the fruits of their labor.

Teacher Liaison Beth Sonnenberg believes the Edible Schoolyard curriculum provides an important service to the sixth graders, who often have a difficult time with the transition from elementary school to the middle school environment.

"I was attracted to the idea initially because it offered sixth graders a chance to be kids," says the veteran middle school teacher who's been a part of the Edible Schoolyard project since its inception. "I wanted the students to have time to play, to be outdoors," says Sonnenberg. "I wanted a place to keep them young for a little while longer."

Amid the fun and play, though, they're doing a lot of hard work and meaningful learning, too.

Time in the garden is an integral part of the middle school science curriculum, providing practical examples of everything from soil erosion to photosynthesis. When sixth graders studied erosion, for example, they only had to go outside to see its impact in a real-world setting. "Due to construction at the school, a steep hillside with absolutely no vegetation on it was created next to the garden," recalls Sonnenberg. "After we had done a variety of activities from the Landforms FOSS kit, and read in our textbooks about erosion, we designed ways to keep the soil on the hillside and prevent erosion. As a science teacher I used this as an assessment tool, and students were able to make recommendations for a real situation."

Journal writing is also an integral part of the garden curriculum and gives students the opportunity to reflect on their work and show what they've learned.

In one entry, for example, Jason writes about his work in the garden and expands on the benefits of a cover crop.

"Yesterday we went to the garden. Our crew made a fence, after collecting branches to make it. Near the fence, there was a new plant where the corn was. It was called cover crop. It holds in the soil near its roots to prevent erosion. It attracts lots of beneficial insects (ones that help the garden). It also protects the soil from the sun's ultraviolet light. Not only that, it provides fertilizer to make rich soil. We saw snails, ladybugs, flies, wasps, and more."

The impact of the Edible Schoolyard extends beyond the enriched curriculum or the (hopefully) healthier food choices made by the students, says Garden Manager Kelsey Siegel.

"I want students to come away from here believing that they can make a difference," says Siegel. "I want them to have the confidence to say, 'I can create a beautiful place like this,'" he adds, stretching out his arms to take in the expansive garden and kitchen area.

Chef Teacher Cook echoes Siegel's sentiments when she speaks about her goals for the kitchen lessons. "I hope to bolster their self-esteem and that it radiates out into other situations -- in the hallways, on the playground, in the classroom. I want them to leave this program with enough confidence that they can improvise in the kitchen," she adds -- the true test, perhaps, of a confident, capable cook.

Credit: Edible Schoolyard, Martin Luther King Jr. Middle School
Through their work in the Edible Schoolyard and kitchen students grow in their understanding of themselves -- and their connection to the environment. 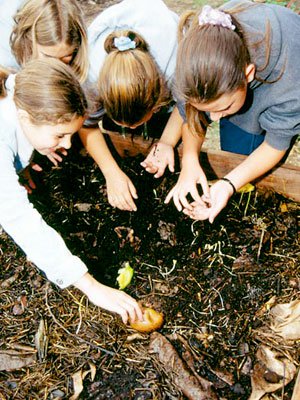 Credit: Edible Schoolyard, Martin Luther King Jr. Middle School
Through their work in the Edible Schoolyard and kitchen students grow in their understanding of themselves -- and their connection to the environment.

Siegel and Cook are just two of the adults students come in regular contact with during their work in the garden and the kitchen. Community volunteers play a critical role in the project -- ensuring that students can work in small groups (so everyone can take part in the process) and providing caring adults for students to learn from and interact with.

Ernest Holland Jr., a senior in biology at UC Berkeley, is one of those trusted volunteers. Holland heard about the Edible Schoolyard through his participation in the Biology Scholars Program, whose aim is to increase the participation of Berkeley undergraduates from historically underrepresented groups in the biomedical sciences. Every Friday afternoon Holland works with a small group of students in the garden, getting his hands dirty and teaching -- and learning -- lessons about "the interconnectedness of everything."

"I like to work with kids and I like being in the garden," says Holland, who hopes to be a teacher after graduation. His goal, says the native of nearby El Cerrito, is to provide an alternative to the typical role model for urban youth.

"When I was growing up it wasn't acceptable to enjoy working in the garden," says Holland. "I want to send a message to kids that it's okay to enjoy this. I want them to know it's not just cool," he adds, "it's deep cool."