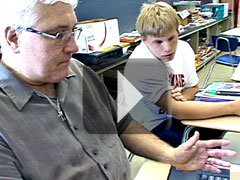 Jim Wilson, a self-described "old guy" and star of the Edutopia video Conquering Technophobia, has gone from grumbling about his school's technology-integration initiative to embracing it. Laptop computers and other gadgets are now tools that he uses just about every day in his English classes at Freedom Area High School, outside Pittsburgh.

There have been bumps along the way, and -- Wilson will be the first to tell you -- there are surely more to come. But he's pleased with what computer technology has enabled him and his students to do in the short year since he entered the information age. Here are Wilson's tips for teachers undergoing the same tricky transition:

Wilson has the benefit of an on-site tech-integration coach, provided jointly by the school district and a state grant. However, even teachers without this resource can walk down the hall and find help from a more tech-savvy colleague. Or they can simply look around their own classroom, as explained in Wilson's next tip.

Some of Wilson's most dependable tech tutors have been his students. Students can also coach one another -- every class has a computer whiz or two. "I have a tough time answering the simplest of questions, but I've learned a whole lot from them," Wilson says. "Learning from the students is a neat thing. They're proud of themselves because they know something that the teacher didn't know."

Wilson started by learning to use email, then moved up to Yahoo searches, Microsoft PowerPoint, and ultimately streaming media. He says, "If I could learn as much as I learned this year every year, I think in a few years I'll be of some use to the students instead of the students being of some use to me." 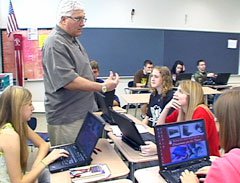 Be Precise About Your Expectations

When asking students to use tech tools and the wide world of Internet resources, you need to be specific. Says Wilson, "There are so many places you can go and really stray and still be in the same ballpark." After a couple of projects gone awry, he learned to make his assignments exceedingly clear.

"Pitfalls are going to happen every day," Wilson notes. Then he adds with a laugh, "This is public education." Yet, from those pitfalls come lessons about how to do things better the next time. Already, Wilson has learned some computer-troubleshooting techniques, and he has tweaked lesson plans to obtain better results. In the meantime, he says, "you hope the pit is not too deep."

Allow Students to Take the Reins

Back in the 1970s, Wilson recalls, the mentality that a teacher on his feet is worth two in his seat kept him looking over students' shoulders and walking them through many tasks. Now, with the resources and tools computers and the Internet provide, he feels more comfortable standing back and letting students explore a project on their own -- acting more like a coach than a drill sergeant. That's not to say computer-using kids don't require supervision. Wilson says, "You still have those day when you have to be the bad guy."

Wilson may be an old dog, but he quickly learned that with the wealth of material available online, students, he says, will "paste and copy any paper they can." It's something to watch for, he adds. But on the flip side, Wilson notes, the exposure to different ideas and information can expand their perspectives and help students formulate their own opinions.

"If you have an open mind, you'll see that using technology is just like anything else," he says. "There's good and there's bad, and you just have to wade through and figure out how you can best fit into the situation."