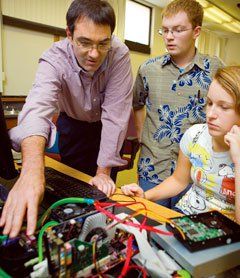 Until recently, the learning experience at Freedom Area High School was a lot like what you'd expect to find at any twentieth-century high school.

Practices at the 580-student school in the old railroad town of Freedom, north of Pittsburgh, Pennsylvania, hadn't changed much since the school's founding in the early 1900s: Students did the vast majority of their work with pen and paper. Teachers assigned occasional projects but mainly lectured. Each instructor was required to give at least three tests every nine weeks.

"The kids would sit in seats for four years," recalls technology-integration coach Tom Hickey. "The 20 percent who excel in a traditional classroom did really well. The middle 60 percent kind of muddled through."

By 2004, school and school district leaders realized that in this era, they had to do better. The region's old standby industries -- railroads, steel, and farming -- were shrinking. The Pennsylvania Cyber Charter School had opened in nearby Midland and had grown to serve more than 3,000 students from around the state. With $10,000 in state seed money, Freedom hired a consultant from the International Center for Leadership in Education, in Rexford, New York, to assess the school. The consultant's evaluation affirmed the need for change: Subject matter was disconnected from class to class, the staff lacked a common mission, and students reported that their assignments failed to challenge them.

The Pennsylvania Department of Education announced new grants for high school reform, and Freedom seized the moment. This would be no off-the-shelf quick fix, says Hickey. "We wanted to completely change our high school."

Principal Robert "Rusty" Staub spent the bulk of the $70,000 grant in 2005-06 on professional development, sending small groups of teachers to exemplary high schools around the country, including JEB Stuart High School, in Falls Church, Virginia, and New Technology High School, in Napa, California.

It was expensive, says Staub, but it inspired the teachers to make radical changes. "When they came back," he says, "they wanted to flip the tables over."

Based on what they'd seen, a steering committee of teachers, administrators, and other staff decided to revamp curriculum, instruction, and assessment, with project learning as the crux of the reform. Using another $70,000 from the state in each of the next two years, Staub again emphasized professional development, hiring experts in project learning from the International Center for Leadership in Education and the Buck Institute for Education, in northern California, to train teacher leaders who then trained their peers. 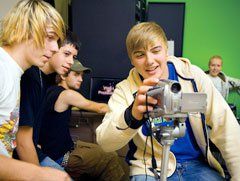 In 2006, the school earned a place in the state's Classrooms for the Future initiative, which provides a laptop for nearly every student in core-subject classes, as well as interactive whiteboards and plenty of other tools for classrooms. The program also covered some teacher training and part of the salary for Hickey, a math and technology teacher, to become a coach, helping his colleagues get comfortable with digital tools and increasingly sophisticated projects.

Classrooms for the Future dovetailed perfectly with Freedom's reform plan, and the two efforts -- modernized teaching and technology integration -- merged seamlessly into a single crusade.

To bolster these efforts, Freedom has enacted more changes. It switched to a block schedule, nearly doubling its class length from forty-three to eighty-four minutes. Students built benches to line the hallways as spaces for group work. This year, the school created common planning periods for teachers from each core-subject department. Educators now allow students to use cell phones and iPods between classes, as adults would, and they play rock music in the halls at passing time. The school, says Staub, is going for more of what he calls a "higher ed" environment.

On a Friday last spring, the transformation was evident. In many classrooms, groups of students worked on projects while teachers circulated to help as needed. In Rebecca Rolinson's English classroom, sophomores planned their modern-media spoofs of Shakespeare's Julius Caesar -- among them a television broadcast featuring on-scene interviews at the Festival of Lupercalia and a newspaper running an obituary of Caesar and a sports story on dog fighting. Maria Sosko's freshman history students critiqued each other's virtual children's books (created with Microsoft PowerPoint) on the sinking of the Lusitania; they planned to present them to a local third-grade class.

Juniors in Steve Tinker's sociology class wrote lyrics and created digital music for modern versions of the Billy Joel song "We Didn't Start the Fire," covering major world events since the original recording came out in the late 1980s. 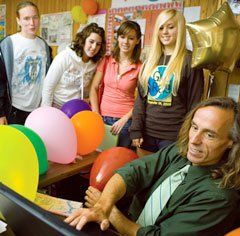 Tinker was one of the teachers who visited New Technology High School in 2006 -- a revelation that came at a critical time for him. The ponytailed track coach and military veteran, tired of teaching the same old way, was thinking about leaving Freedom for a school where he could take a different approach. In Napa, he saw students actively engaged in creative projects, moving around the classroom rather than sitting passively and taking notes.

Now, Tinker says, Freedom has become the school he wanted to find. Whereas he estimates that before, he lectured about 60 percent of the time, now he spends 75 percent of class time on projects. "I've always wanted to do it this way, but it was not the way you typically did things," he says. "Teaching was one thing and one thing only."

Projects come with big challenges, though. Tinker and other teachers say project design requires a lot of time and planning -- much more than for traditional assignments. It's hard to predict how long a given project will take (the Billy Joel spin-off took a month) or what kinds of difficulties may crop up along the way -- not to mention the challenge for teachers and students of learning to use the new technologies that enable these projects. Tinker tolerates this uncertainty by accepting that something will occasionally go wrong, apologizing to his students when it does, and even learning alongside them when he runs into a thorny problem (particularly a computer-related one).

The payoff is powerful. Music may not be Tinker's subject, for instance, but he uses it as a hook to get teens involved in history. Then, a student researching song lyrics might ask questions about the first O.J. Simpson trial, leading to a discussion about the significance of the event. Tinker says, "It's so much more valuable than me force-feeding them what I think they should know."

As the students worked on their songs that Friday afternoon, Reanna Brandt, a junior with long, wavy hair and silver star earrings, asked Tinker if she could include more than the required eighteen historical events in her song. She explained, "I am so on a roll with this."

It's too early to tie standardized test scores to the reform at Freedom, but other measures point to success. In 2007-08, when the reform efforts first gelled, the number of class periods students cut dropped 56 percent and tardy arrivals decreased by 70 percent from the previous year. Discipline referrals also plunged 70 percent, and classroom surveys found a 10 percent increase in on-task behavior.

There's also the effect that can't be easily quantified -- the satisfaction of teachers and students. "It's definitely a lot better than just sitting here listening to somebody talk forever," said Brittany Stehle, then a sophomore in Rolinson's class. Though the projects can be stressful and tiring, she and her classmates said, they wouldn't go back to the old way of learning. As then sophomore Julie Scheller put it, "You learn it better if you look it up yourself."

Science teacher Brandi Burger says it's challenging to plan projects that engage students while covering the required content, and she's learned the hard way that students will turn in shoddy work if she doesn't state extremely clear expectations. But the change is essential, she said. "They're so used to text messaging while watching TV and playing with their iPod and trying to study that it's hard to be stimulating enough for their brains to focus," Burger adds. "It's not enough to just stand up and talk."

Reflecting on a day when her students created public-service-announcement videos about infectious diseases, Burger says, "Days like that, when they become independent and you're just facilitating, are a lot less exhausting than standing up and lecturing and trying to keep their attention. And you get a really great product. You're proud of what they produce."

Of course, some teachers have struggled to adapt (junior Justin Black laments the ones "who use the technology but you're still listening to them talk for eighty-four minutes"), and a very small number reject the new approach outright. The bigger threat to sustained progress, though, might be money. The initial reform grant from the state has expired, knocking Principal Rusty Staub's professional-development budget down from $70,000 to about $7,000. And the $30,000 annual contribution to technology-integration coach Tom Hickey's position through Classrooms for the Future will likely evaporate after this year.

However, Staub intends to keep funding Hickey's work through the regular school budget. "You've got to have someone like that," Staub says, "or the equipment collects dust." He's counting on the lead teachers trained over the past three years to keep helping their peers. And he believes the new approach will survive because it has to. He says, "There's no going back."

Go to "How to Use Technology to Enhance Project Learning."