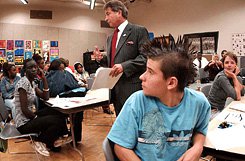 As a high school senior, Lauren Titus was already $1,500 down the slippery slope into debt last spring when bankruptcy court judge John C. Ninfo II showed up in her Rochester, New York, classroom. His message -- that your credit score can affect your future more profoundly than your transcripts do -- hit home.

Titus's mother had cosigned on a credit card for her to take on vacation for emergencies -- but "emergencies" became picking up souvenirs and, later, going out for dinner with friends, buying new clothes, filling up at the gas station, and paying prom expenses. After Ninfo's talk, Lauren stopped charging food and drink and started trying to pay down the debt. Finally, finding she couldn't resist the odd $80 shopping spree ("It doesn't feel like you're spending money, but you are in the end," she says), she asked her parents to take back her card. With her job at a local coffee shop, she estimates, it will take her at least a year to pay it off.

For Ninfo, this is a mission accomplished: one fewer person who will end up in his courtroom someday.

"I couldn't sit here in my bankruptcy court any longer and just watch people ruining so many aspects of their lives because of financial illiteracy without trying to do something about it," he says.

This student illustration highlights the real cost of a pair of running shoes. The price may be $80, but if you were to use a credit card, the same shoes could cost $125.

Credit: Courtesy of the CARE program

Ninfo, a judge in the U.S. Bankruptcy Court for the Western District of New York, started preaching his message of budgeting and saving in 1997, after one too many debtors looked at him, he says, "like a deer in the headlights," unable to explain how he had gotten tens of thousands of dollars in the hole. By 2002, Ninfo realized he needed many more apostles to spread the word, and he asked the local bar association to join him.

He created the Credit Abuse Resistance Education (CARE) program, which provides free educational materials and marshals a network of bankruptcy judges, lawyers, and trustees to teach high school seniors and college freshmen -- a vulnerable demographic -- about financial responsibility. Courts and bar associations across the country soon joined the group, which now boasts volunteers in all fifty states.

Financial Volunteers in the Classroom

A growing number of finance-industry professionals are taking up the cause, volunteering to visit schools and teach the next generation how to avoid the financial mistakes of their elders. Laura Levine, executive director of the finance-education coalition Jump$tart, sees a surge in interest in such programs that dates back a decade. Even before the recent mortgage crisis, she says, the rise in bankruptcies, decline in savings, and tsunami of credit card debt that Americans have accumulated had convinced bankers and money managers to start teaching.

Levine says industry-led finance education has been happening under the radar for several decades but is rising as Americans' money problems hit the headlines (and the stock markets). Businesses, she says, "recognize that an informed consumer is actually a better customer for them." Not only do the money savvy stay out of bankruptcy, they also tend to have more disposable income. Jump$tart estimates that more than half the nation's high school students graduate without so much as a week's instruction in personal finance. Finance professionals can help teachers who don't have the time or expertise prepare these lessons.

"You can have a great education and still find yourself in a foreclosed-upon home or with a mountain of credit card debt," says Jennifer Saporito, who sees the need as particularly great in the central Los Angeles neighborhood where she teaches sixth grade. "If your parents don't teach you -- and most kids in poverty are not taught about money by their parents -- then there literally is no one who is going to teach you about that."

U.S. Securities and Exchange commissioner Paul Atkins demonstrates the perils of putting all your eggs in one basket with a fifth-grade student at Parkside Elementary School, in Atlanta, during a Banking on Our Future session.

Saporito teamed up with the nonprofit organization Operation Hope, in Los Angeles, to bring seventy-five financial-literacy volunteers to her public school, the Foshay Learning Center, for one day last December. The group's Banking on Our Future (BOOF) program provides financial-literacy curriculum and training to 6,800 volunteers, mostly from the finance industry, in high-poverty areas nationwide and in South Africa. BOOF materials cover a progression of concepts for grades 4-12, from needs versus wants to banking and credit to basic investment.

It took nearly a hundred hours of planning on Saporito's part, but her guests came prepared to tailor their lessons to the needs of each middle school classroom, including bilingual and low-reading-skill groups. The volunteers brought the subject to life, emphasizing "how this stuff affects you, how it affects your household," Saporito recalls. One volunteer set up a faux store containing the kinds of products kids like to buy. Another, who had grown up in the neighborhood, related experiences, such as seeing her mother's credit card declined in a store, she and the students shared.

Beyond the expertise industry volunteers bring, says Saporito, meeting real-life bankers demystifies the banking system for students. "It was empowering," she says. "So many kids said things like, 'I didn't know I could open a bank account.'" One girl started up a savings account the next day.

BOOF director and senior vice president Emily Ausbrook says her organization also sees the visits as a way to expose kids to various careers and to open opportunities for mentoring.

Certified public accountants are joining in, too. The American Institute of CPAs has developed a curriculum package for grades 4-6, and volunteers from state CPA societies are available to teach it in classrooms across the country. (Educators interested in hosting a volunteer should contact their state society's office.) Other institutions that provide finance education to kids include Merrill Lynch and the National Youth Involvement Board, a network born in the nation's credit unions.

Often the biggest challenge for these financial-literacy programs, Jump$tart's Laura Levine says, is that educators, even those who teach finance, may not know these resources exist. (For links to online lesson plans and volunteer programs, go to Jump$tart's Web site.) And once the volunteers are in the classroom, there's the small matter of translating technical expertise into engaging lessons for kids who may never have received a paycheck. That's why these programs work best, says Levine, when classroom teachers and finance experts work together.

The payoff? In the long run, financial literacy is good for business, and in the short run, the good work helps fulfill companies' obligations under the federal Community Reinvestment Act of 1977. For individual volunteers, of course, helping the next generation is good for the soul. "When you ask a banker about teaching" financial literacy, says Ausbrook, "you don't even have to finish your sentence. They're like, 'Where do I sign?'"

Judge Ninfo brings that kind of passion to his quest. He practically bursts with startling facts -- a family with a fairly typical credit card debt of $7,000, paying 20 percent interest, will spend $1,400 a year just to rent that money, without paying back a penny -- and disturbing stories of people who bankrupted themselves through many seemingly small mistakes, like buying a newer car or eating out at Applebee's a little too often.

Lauren, the reformed young debtor, has some insight on how Ninfo translated that passion into a lesson with real punch. He laid out the simple, sobering mathematical facts on debt. But beyond that, she says, he related money matters to the teenage concerns of clothes, cars, and college, making the case in such a way that it seemed as if "he knew exactly what we were thinking." She plans not to take on another credit card, she adds, "until I know I'm responsible enough to handle it and not go out to the mall and use it just because I can."