Tensions from the 1992 Rodney King riots were still high when Woodrow Wilson High School, in Long Beach, California, hired Erin Gruwell to teach English. But it seemed there would be no teaching: Gruwell found a classroom rife with racial animosities and full of students -- "the unteachables" -- bitterly resistant to her. What happened next has been well documented, in The Freedom Writers Diary, a collection of her students' writings, and most recently in the film Freedom Writers.

Gruwell now serves as president of the Freedom Writers Foundation and teaches at California State University, Long Beach -- where several of her former students are pursuing undergraduate and graduate degrees. Her second book, Teach with Your Heart: Lessons I Learned from the Freedom Writers, was published in January. 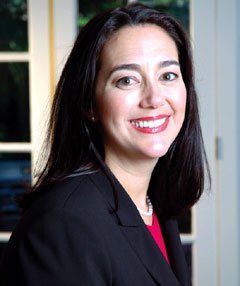 A teacher that's humble enough to be a student, and one who believes unequivocally, without exception, that every single student can make it.

I ran for student body president my senior year and lost to an anarchist with a mohawk. In retrospect, it was hilarious. I saw the film Election and went, "Oh, my God, I was Tracy Flick." That aggressive, type-A personality was probably so obnoxious, looking back.

I am a public school child, born and raised, right through graduate school. There's such a hierarchy in our country, and public education should be the greatest equalizer. Vouchers are putting a Band-Aid on a shotgun wound. We're using education to systemically segregate, even if not intentionally.

English and history. I love the cliché that says if you don't learn from history, you're doomed to repeat it. I got a master's degree in American literature. I love stories about the triumph of the human spirit, and gritty stories about overcoming adversity. There's so much great literature out there about underdogs finding their place in the world.

It's embarrassing. I was class president, I was a cheerleader, I was an honors student, I was captain of the field hockey team. I like to think I was inclusive and multidimensional. Not like those Mean Girls types, anyway.

Teach to a student and not to a test. As simplistic as that sounds, it's profound. There's not a one-size-fits-all way to teach kids.

Nothing. It's all in the way it's presented. For me, the best part of educating students is engaging them, enlightening them, and then truly empowering them. In my class, I really embraced the human-spirit element. It was a very emotional environment. When you're looking at subjects such as genocide, it's hard to educate students to critically think and problem solve and not have emotion. You have to bring those subjects to life.

There's a profound idea we learned from places like Auschwitz: Evil prevails when good people do nothing -- so maybe that idea that every person is good, and cannot stand idly by when injustice happens. In education, sometimes we fixate on academics.

I learned that the power of telling one story can be liberating and cathartic. I've spent the better part of thirteen years always telling my students' story. And now that I've written a second book, I have to tell my own story. And it was intimidating. It was easy to talk about the Freedom Writers. Today was the first day I had to do an interview about my book.

I taught that learning isn't limited to a classroom, or a No. 2 pencil, or a Scantron.

Well, I just did. It's called Teach with Your Heart: Lessons I Learned from the Freedom Writers.

I would take Anderson Cooper. He's got this insatiable quest to spread information and to educate people every night, in their living rooms. I think it'd be fun to chat with him about all the places he's been in this world that one day I aspire to visit -- because I'm a better talker than a dancer.