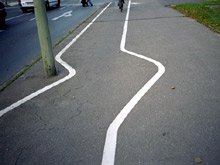 On the first day of February 1966, President Lyndon B. Johnson had a phone conversation with Senator Eugene McCarthy in which he hoped to tone down McCarthy's criticism of America's escalating military involvement in Vietnam. Johnson, clearly frustrated by the deepening political quicksand of Southeast Asia, said with exasperation, "I know we oughtn't to be there, but I can't get out. I just can't be the architect of surrender."

At the time of Johnson's confession, more than 90 percent of the 58,178 American troops who would ultimately die in Vietnam were still alive. Many would be killed in the ensuing three years. Most were younger than twenty. It took another nine years and two presidents before the United States extracted itself from Vietnam. By the time the last American grunts left Saigon at the end of April 1975, Johnson was two years dead.

We continue down ragged and wrong paths, whether they're in flawed international relations or in public-education policy, because we are, for better or worse, creatures of habit and creatures of fear. We don't want to rock the boat if there's a chance the turbulence might send us overboard. We do things in our classroom or our school or our district because that's the way they've been done before. We know they're not perfect -- some are even ludicrous or dead wrong -- but we feel we can't get out.

It is time, however, to think in terms of radical restructuring. This year, you're going to hear a lot about education on a national-policy level. President George W. Bush signed the No Child Left Behind Act into law five years ago, and it is scheduled for congressional review and reauthorization this year.

Despite NCLB's noble intent -- improving the education of every student -- the bill's overreliance on accountability has raised the ire of educators everywhere. In a recent poll, about 70 percent of the National Education Association's 3.2 million members disapproved of NCLB; 57 percent wanted major reforms. In addition, more than a hundred disparate national civil rights, disability-advocacy, education, and religious groups have called for major changes to NCLB.

In a joint statement, the groups noted that "the law's emphasis needs to shift from applying sanctions for failing to raise test scores to holding states and localities accountable for making the systemic changes that improve student achievement." Among the suggestions: Replace overemphasis on standardized tests with the use of multiple achievement measures, supplant what they feel are arbitrary proficiency targets with achievement goals based on rates of success actually achieved by the most effective public schools, better training for teachers and administrators, and increased funding to cover the costs to carry out NCLB's goals.

But let us use this year to debate not only the mechanics of NCLB but also the great expansive questions of education, and I suggest we open up the questions of our educational environment even further. What if grades were organized by students' learning style (visual, verbal, kinetic, and so on) instead of by age? What if schools had staggered start times -- 8 o'clock for some, 10 o'clock for others? What can be done about the emotional dark passage of middle school? Should middle school even exist?

We can't afford the aftermath of myopia. In the late 1930s, as Britain refused to understand and prepare for the war clouds gathering over Europe, Winston Churchill observed, "The era of procrastination, of half-measures, of soothing and baffling expedients, of delays, is coming to a close. In its place we are entering a period of consequences." Our education system is entering such an era -- a time of rapid change and momentous choices. Many of the decisions are hard, and some may cause fear. We know there are better ways of doing things. But we continue to do things the same old way with the same style in the same place -- even when we know we oughtn't to be there.