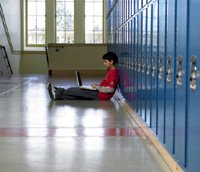 Each generation, it seems, looks at the one that follows it with an incredulous mix of astonishment and horror. The new styles of hair, fashion, music, toys -- all seem alien and incomprehensible to those who have gone before.

Add one more item to the list: technology. Today's kids are the first generation weaned on the wire. Every student from college age on down was born after the January 1984 introduction of the Macintosh computer. Five years after the Mac debuted, Tim Berners-Lee invented the World Wide Web in a small office in Switzerland, and, in the mid-1990s, Netscape's Web browser became the tech version of the Model T, making distant minds and ideas accessible to all. Every student cracking a textbook this fall is growing up in an atmosphere in which electronic information is plentiful, easy, iconic, and highly appealing. Many have never known a world without the Internet.

We now live and learn while enveloped by technologies. The incessant hum and ring of the PC, the cell phone, and the instant-messaging alert make up the soundtrack of the average iKid's day; according to the Pew Internet and American Life Project, 87 percent of children ages twelve to seventeen are online. Today's kids are also masters of multitasking, often messaging, listening to music, and chatting on a cell phone simultaneously.

More importantly, twenty-first-century students have grown up in a world vastly different from those trying to teach them. To the always on Net Generation, the iPod, multiplayer online games, and the Web are not awkward and often aggravating technologies but, rather, nimble and powerful tools capable of magic. The intrinsic familiarity of youth with nearly every aspect of tech makes them able to find and absorb information in radical new ways, assimilating multiple media streams instantly. They expand on classroom learning by aggressive online research, ferreting out varied opinions and questioning calcified logic. Old coots like myself, on the other hand, learned by rote, in schoolrooms featuring ancient teachers and outdated, dog-eared textbooks -- or was it the other way around?

Popular opinion used to be that in the future, everyone eighteen and younger would be vidiotic dunderheads, their brains shrunk to the size of a raisin by incessant exposure to the PC and the TV. Not true. In the decades to come, some of these same kids will be teaching their own classes, and their schoolrooms will include electronic chat, wikis, and real-time video links with people and ideas from around the world. Today, as educators, we must not only learn how to use the tools students take for granted; we must also actively employ this same gear to engage them emotionally. But first, we have to learn to fluently speak their language, an electronic conversation of infinite information delivered in multiple emerging forms over a variety of transmitters. The upcoming generation is going to amaze us in ways we're just beginning to understand -- if we can just keep up.